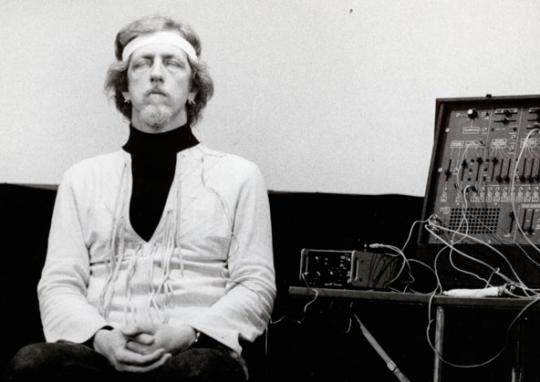 David Rosenboom (b. 1947) is a composer, performer, interdisciplinary artist, author and educator known as a pioneer in American experimental music. During his long career, he has explored ideas about the spontaneous evolution of musical forms, languages for improvisation, new techniques in scoring for ensembles, multi-disciplinary composition and performance, cross-cultural collaborations, performance art and literature, interactive multi-media and new instrument technologies, generative algorithmic systems, art-science research and philosophy, and extended musical interface with the human nervous system.

He has been Dean of The Herb Alpert School of Music at CalArts since 1990. He taught at Mills College from 1979 to 1990, where he held the Darius Milhaud Chair and was Professor of Music, Head of the Music Department, and Director of the Center for Contemporary Music. In the 1970s he was founding faculty and a professor in the Music Department at York University in Toronto. He studied at the University of Illinois in the 1960s with Salvatore Martirano, Lejaren Hiller, Kenneth Gaburo, Gordon Binkerd, Paul Rolland, Jack McKenzie, Soulima Stravinsky and others and was later awarded the George A. Miller Professorship as a visiting artist there. He has also taught or held positions in the Center for Creative and Performing Arts at the State University of New York at Buffalo, at Bard College, Simon Fraser University, San Francisco Art Institute, California College of Arts and Crafts, Center for Advanced Musical Studies at Chosen Vale and Ionian University in Greece.

His work is widely presented around the world. Recent highlights have included: a fifty-year retrospective of his music presented in a series of performances at the new Whitney Museum of American Art in New York (2015), a six-month exhibition of his work with brainwave music at Centre Pompidou-Metz in France (2015-2016), a four-month exhibition of his work in computer music at Whitechapel Gallery in London (2015-2016), a retrospective of his music for piano(s) at Tokyo Opera City Recital Hall (2016), the premiere of his Nothingness is Unstable for electronics, acoustic sources and dimensional sound diffusion at ISSUE Project Room in Brooklyn (2017), new music for Yamaha Disklavier™ piano and interactive electronics at the Annenberg Center in Philadelphia for ImproTech 2017, a composer-pianist portrait concert at Center for Experiments at Teatro Colón in Buenos Aires (2018) and numerous other international festival events, publications, recordings and keynote speeches. During the most recent three seasons his ground-breaking work for live electronic music and computer analysis of brain signals, Portable Gold and Philosophers’ Stones(Deviant Resonances), has been presented in venues around the world, including: The House, Plymouth University (UK), Computer Music and Multi-Media Research festival; Centre Pompidou-Metz; Haut École de Musicque de Genève Festival Multimod Performer-Composer; Fleet Science Center IMAX, San Diego, Art Music Technology Festival; Gray Area Grand Theater, Buchla Memorial Festival), San Francisco; and Le Centquatre-Paris, INA GRM (2018).

Floris Vanhoof (1982) is interested in the hybrid form of music, photo and film. Projections and music produced by a modular synthesizer are central to his work. His first projections were 16 mm celluloid experimental films which evolved into pure visual experiences in which he questions viewing patterns.
His work is rooted in structural film and early electronic music.
From here grow audiovisual installations, expanded cinema performances and music editions.

Vanhoof creates his own instruments and installations and explores the grey area between image, light and sound. As a media-archaeologist he confronts the digitally spoiled visitor with flickering 16 mm films and slide installations, formats whose days are numbered. He deliberately choses analogue technology, not for nostalgic reasons, but because he wants to experiment with what used to be known as ‘high-tech’.

Film projectors have a special shutter which shows each picture 3 times in rapid succession, so that although the number of pictures shown is only 24 per second, the flicker rate is 72 flashes of light each second.

Low-frequency flicker produces very odd effects. At flash rates of about 5-10 per second brilliant colours and moving and stationary shapes may be seen and can be extremely vivid.

Their origin is obscure, but they probably arise from direct disturbance of the visual systems of the brain, the massive repeated bursts of retinal activity overloading the system.

Ambition is not the whole story. I think curiosity is important.

Curiosity, discovery, activity and the notion of having and developing a vehicle to explore yourself.

It's like having an instrumental device to probe who you are.

Most of who we are is subconscious anyway.

It's also about being connected into a larger whole of what it means to be an artist in society today and relating to recent and remote history. Where you are at that spot in multidimensional space. One could say space and time, but it's of course more global then that.

For Stan Vanderbeek as for many other experimental filmmakers at the time cinema had to be expanded. It had to envelope mankind in a sphere of technology and screens and it had to permanently expand our consciousness. So Vanderbeeks Moviedrome was like physical bodies and electric media had started to form a kind of extended nervous system.

In this extended nervous system you would be able to wear your brain outside of your skull.

In experimental psychology a tachistoscope was used to show visual stimuli to test subjects for a very short time. Because the presentation is so short, the viewer makes relatively many mistakes. Just as this psychological 'microscope' examines small-scale details of mental processes, I want to literally create a different vision with the converted film projector.

This leaves more room (time) to experience what images do in our heads.

In this totally different cinematic experience, the hidden potential of the after-image emerges.