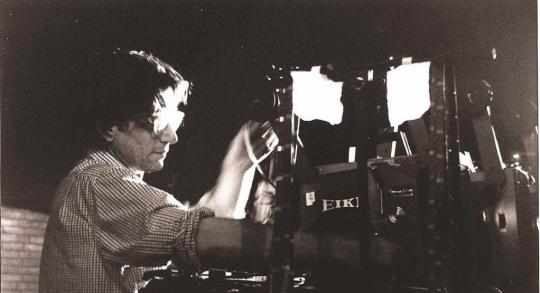 Bruce McClure doesn’t make films, he performs them. Most movies are frozen on celluloid or written on videotape. McClure’s don’t exist until he creates them in the theater. Twirling knobs, flipping switches, and adjusting lenses, he coaxes a bank of whirring projectors into producing images impossible to record: moire patterns dancing in mid-air, a glowing orb rising from the surface of the screen, prismatic bursts flashing about the room. McClure is an architect by training, who started making films. Since then, he’s encountered remarkable success, appearing in the 2002 and 2004 Whitney Biennial, and presenting film performances across the United States and internationally, including in Canada, Scotland, Italy, Japan, and Latvia.

The practice of Alex Mendizabal is characterized by the construction of instruments and sound spatialization. It often adopts unusual forms, such as blind films, concerts in movement, or underwater music. He has spent thirty years researching different areas of music and sound. His proposals range from music for an orchestra to experiments with graphical notation, scores of less than a second, and concerts for geological movements. In 1996, he stopped composing in order to dedicate himself to making instruments and incorporating space and a reflection on listening as the basis of his proposals.