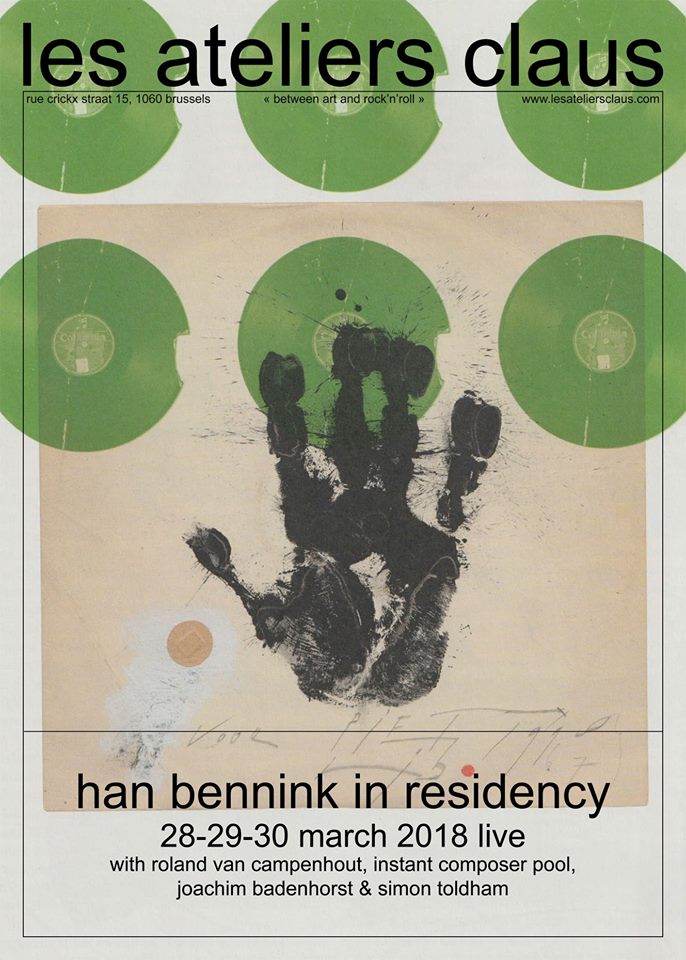 WED 28 MAR Han Bennink (nl) & Roland Van Campenhout (b) THU 29 MAR Han Bennink (nl) + The Instant Composers Pool  FRI 30 MAR Han Bennink (nl) trio with Joachim Badenhorst (b) & Simon Toldam (dk) Dutch drummer Han Bennink has been an unrelenting creative force in jazz and improvised music since the early 60s. In 1964 he played on Eric Dolphy's legendary final record, Last Date, and in '67 he formed the Instant Composers Pool with pianist Misha Mengelberg and reedist Willem Breuker. He has an instantly recognizable sound—loud, chaotic, furiously swinging—and he's applied it to hundreds of records. He's all about improvisation, so leading a regular band has never been high on his list of concerns—he's more interested in interaction and disruption. Finally, eight years ago, he decided to form a trio.

When the group dropped its 2009 debut, Parken (ILK), Bennink's two partners—Danish pianist Simon Toldam and Belgian reedist Joachim Badenhorst—were still relatively unknown figures, performing in the shadow of a charismatic, extroverted giant. They pulled it off, but on the trio's recently released third album, Adelante (ICP), the combo has clearly grown as a unit. While Bennink can't help but improvise at every turn, the album is rooted in compositions by Toldam and Badenhorst, most of which are beautifully lyrical—including Badenhorst's gently rolling "Comacina Dreamin'" and Toldam's high-velocity swinger "Supertyphoon."
The most arresting compositions on the new album, though, are by the late Mengelberg—they're both later works, and rank among his most tender and beautiful pieces. The trio's version of "De Sprong O Romantiek der Hazen," which shimmers with a Duke Ellington-like elegance, employs a piano line whose lovely fragility is instantly shattered by Bennink's deliberately anarchic clatter and Badenhorst's rheumy bass clarinet chortling. As the piece unfolds, though, the gorgeously moody melody wins out over this sort of turbulence. The piece was recorded last November, when Mengelberg was still alive, but it's hard not to hear it as a lovely tribute to his memory.