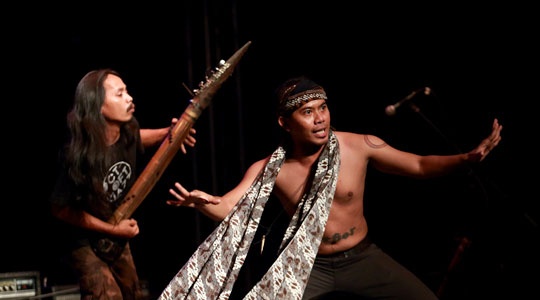 From Bogota, Colombia, the MERIDIAN BROTHERS are an art-combo who mix Latin American rhythms with art noise and unpredictable sonic events. Traditional instruments and computer technology all contribute to this mixture of influences from vintage tropical styles from the Colombian coastal zone, the Caribbean and Peru to electronic folk and Dolly Parton.
Imagine the illegitimate offspring of a liaison between the Residents and the Penguin Cafe Orchestra and you´ll be close to the sound of the Meridian Brothers. Convincing Latin dance rhythms are overlaid with skeletal guitars and vocal tomfoolery to create a mesmerising confection of minimalism, cumbia, pop, electronica and Afro-funk.

The band formed in 1998, and sold cassette recordings in the capital of Colombia. Their first official album “El advenimiento del castillo mujer” (The Coming of the Castle Women) was the first official album, released in 2005, and followed in 2009 by “Meridian Brothers VI”. The band is currently touring Europe prior to the release of their third album in November 2011.

Band leader and the conceptualist behind this collection of Latin American art subversives is Eblis Alvarez (vocals, guitars & electronics). Despite an early fascination with geographical meridians, he opted to plough the indie-art music furrow. But don´t think that it´s all fun and good vibes. If, in a parallel universe, Arto Lindsay had four brothers and a sister (one of the Meridian Brothers is female), and they all suffered from Attention Deficit Disorder, the result might be comparable.

Eblis Alvarez describes the band’s output as follows: “Among our influences are the vintage tropical styles from the Colombian coastal zone, the Caribbean and some Peruvian chicha. We also hear a lot of electronic music done with synthesisers and keyboards, but these influences are again very laid back. We don´t like the electronic music beats straight, for us everything is kind of twisted. We like also folk, and vallenato from Colombia. Sometimes we get inspiration from Dolly Parton or even Neil Young, in the sense of mood and speed.”

SENYAWA (ID) is an experimental band from Java, Indonesia consisting of Rully Shabara and Wukir Suryadi. The band has been formed in 2010 in Yogyakarta.

The band mixes influences from musical and folklore traditions from the Indonesian archipelago with experimental music. The band neo-tribal sound has been described to mix "punk attitude" with "avant-garde aesthetics".According to critics, Senyawa has managed to "manage to embody the aural flavours of Javanese music while exploring the framework of experimental music practice, pushing the boundaries of both traditions" to create a sound that is "thoroughly out of this world."
Shabara provides his extended vocal techniques to Senyawa.The band's lyrics are in various languages of Indonesia, including Sulawesian, Javanese and Bahasa Indonesia. Senyawa's music is provided by Suryadi's self-built musical instruments made from bamboo and traditional agricultural tools from rural Indonesia.
Senyawa has been performing extensively in Asia, Australia and Europe. They have collaborated with notable musicians such as Lucas Abela, Yasuke Akai, Jon Sass, Damo Suzuki, Jerome Cooper, Keiji Haino, Melt Banana, Tatsuya Yoshida, Charles Cohen, David Shea and Kazuhisa Uchihashi.