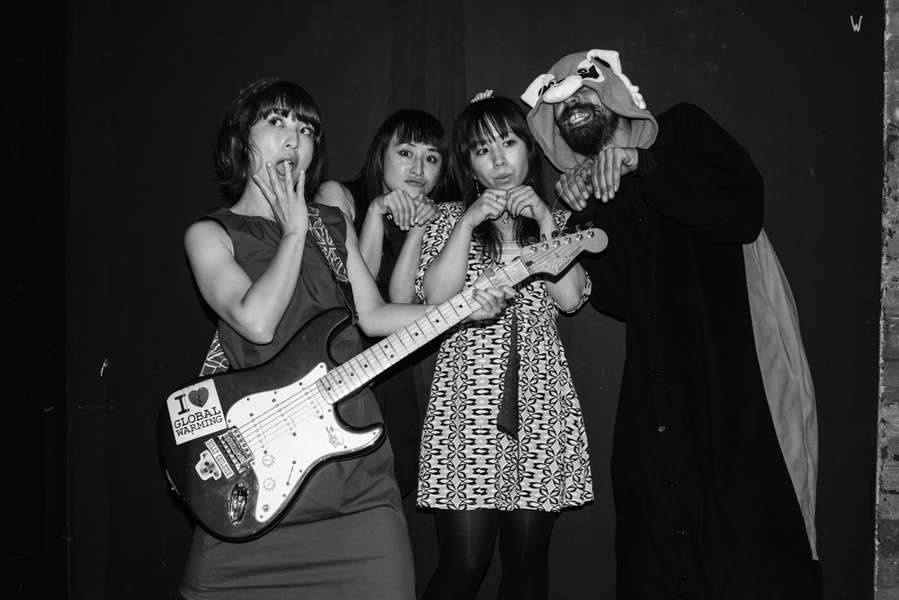 O YAMA O explores a certain domestic and democratic quality of everyday life, born through associations to folk music of Japan and a folding of myth, tradition, and routine; the non-spectacular and the sublime.

Nakajima’s performance often focuses on the use of found and kinetic objects, using modest items such as rice bowls, toys, clockwork, balloons and small motors as instruments to create a “micro orchestra”. Elements are layered into impressive and immersive atmospheres. Yamamoto alternatively floats and charges through this with body and voice; chanting, incanting, thundering, whispering, stamping on the floor.

Their debut album consolidates their musical conversations into keenly paced studio music, the duo working with additional instrumentation and a resolved focus on melody to provide vivid portraits of folkloric Japan in song.

They move between pop and the philosophical, defined by the overall space afforded to texture and movement. In small, delicate sound an intimate musical climate is established that reflects on life, telling stories of improvised clockwork, whispered dreams, small movements of the hand and the rhythm to be found in the shuffle of a deck of cards.

Grandly theatric and dramatic flourishes add solidity to these illustrations, operas driven by the swooping energy and power of Yamamoto’s voice can be playful or emotionally charged, particularly when the duo arrange themselves in ensemble with violinist Billy Steiger and percussionist Marie Roux. Production by David Cunningham creates the shadowy presence of a leftfield Flying Lizards dubwise depth that adds subtle strangeness to the atmosphere. The result is something raw, full-bodied; full of energy, grace and mystery.

Devin Brahja Waldman is a New York saxophonist, drummer, synthesizer player and composer who leads a group called BRAHJA. Waldman has collaborated with his aunt, outrider poet Anne Waldman, since the age of ten. He has performed with luminaries such as William Parker, Patti Smith, Malcolm Mooney (of CAN), Thurston Moore, Godspeed! You Black Emperor, Nadah El Shazly and Yoshiko Chuma. He is a member of Heroes Are Gang Leaders (led by poet Thomas Sayers Ellis and saxophonist James Brandon Lewis) as well as  Sam Shalabi’s Land of Kush. As a youngster, Waldman fell upon the freewheelin' tutelage of pianist Paul Bley. Waldman is a co-producer for Fast Speaking Music —a NYC poetry and music label which has released the works of Amiri Baraka, Meredith Monk, Eileen Myles, CAConrad, Fred Moten, Joanne Kyger and many others.

Devin will do a solo saxophone set espacially for you.

She has played the violin for 37 years and is well versed in the viola, cello, keyboards, oscillator, and analog synthesizer.
Atsuko often plays with JIM O’ROURKE, KUMIO KURACHI, EIKO ISHIBASHI, OORUTAICHI, and YUMBO.

She also plays in her strings project Triola. Recently, Atsuko plays the five-string viola with electronica in her new solo project.
Atsuko has released two solo albums 'Water for 13' and 'Maria.'
She also has released an album as the founding member of TRIOLA, as well as, an animation DVD with artist Nakaban.

The cinematic quality of her sound has lead her to make music for Film and Television.
In 2009, Atsuko founded ORDER MADE MUSIC, a custom made music service.