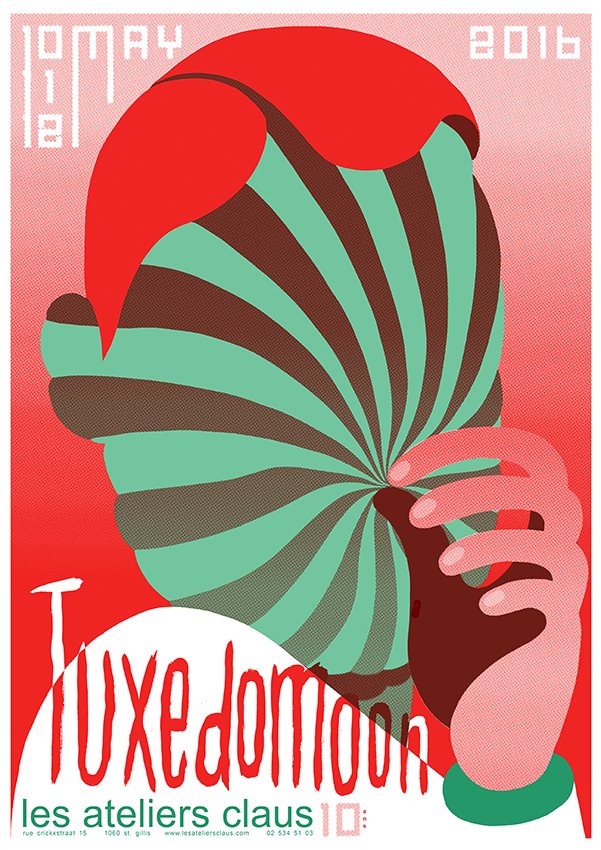 Tuxedomoon will start their Half Mute tour in Brussels (10 - 12 May). For the first show Our Man From Brussels will play tunes before and after their concert!

1980: San Francisco band Tuxedomoon release their debut album Half-Mute, which immediately establishes them as one of the leading avant-garde pop bands.
2016: thirty-six years, dozens of releases and hundreds of shows later, Tuxedomoon’s original members, Steven Brown, Peter Principle and Blaine Reininger, joined by Luc van Lieshout and David Haneke, get together to revisit Half-Mute and perform it on a series of exclusive shows around Europe. Les Ateliers Claus will be hosting Tuxedomoon for a residency to work on this project. The premier is May 10th!
We're very sorry that Bruce Geduldig wont be able to join us for these memorabel concerts. Bruce left us on March 7th.
Of course Bruce will have a place during these concerts at les ateliers claus.

On this occasion, Crammed Discs will be reissuing the album on CD. It will be remastered, repackaged, and coupled with a tribute album entitled Give Me New Noise : Half-Mute Reflected, for which 13 artists have specially created covers of all songs from Half-Mute and from the album's associated singles. The contributors include Foetus/Jim Thirlwell, Aksak Maboul, Simon Fisher Turner, DopplAr (feat. 2 members from Amatorski), Cult With No Name and others, with special appearances by the three makers of Half-Mute, Steven Brown, Peter Principle and Blaine Reininger.

Born in 1977, Tuxedomoon have kept rising phoenix-like from their own ashes on more than one occasion, continuing to reinvent themselves and defy classification, and avoiding many of the pitfalls usually associated with success and longevity.

In their early days, Tuxedomoon played a central part in San Francisco's post-punk golden age and New York's No Wave scene, as documented for example by the Downtown 81 film, in which they appear alongside Jean Michel Basquiat, Blondie, James Chance, DNA and more. No Tears, their 2nd single, has remained an electropunk club classic to this day.

The band went on to sign to The Residents' Ralph Records in 1979, and released two seminal albums (Half Mute and Desire) which soon got them overseas exposure, and established them as one of the leading avant-garde pop bands.

Fleeing Reagan's America, Tuxedomoon moved to Europe in the early '80s, and stayed there throughout the decade. Although their ability to crystallize a certain dark and romantic zeitgeist quickly turned them into one of the most influential bands around, their music transcended all genres and included impossibly wide parameters –rock, electronics, minimal music, classical, jazz, Gypsy music and pop were all simultaneously consumed and transmutated into a quasi-prescient blend.

After releasing a string of albums on CramBoy (the imprint they set up with Brussels-based label Crammed Discs), the band stopped recording together in 1988, and the various members pursued solo careers, becoming as disparate geographically as sonically, with Steven Brown living in Mexico, Peter Principle in New York, Blaine Reininger in Greece, Dutch trumpet player Luc Van Lieshout (who had joined the band in '85) in Brussels, and visual artist/vocalist Bruce Geduldig (who has been an integral part of the band since the Desire album) in Brussels, Portugal and the US.

Tuxedomoon got back together since 2003 to write and record the awesome Cabin In The Sky, Bardo Hotel Soundtrack and Vapour Trails albums, which found them in absolute top form. These albums were warmly welcomed, and a wildly eclectic array of references sprang from the pens of reviewers trying to describe the band's music (Charles Ives, Radiohead, Philip Glass, Miles Davis, German electronica, Tom Waits, John Cage, Kurt Weill, Tortoise, Can…). Which confims the fact that Tuxedomoon were never connected to a particular period: they had become '80s cult figures simply because that's the period in which they happened to develop and rise to fame… but the band have always been evolving in their own space, and their music is as relevant and fresh today as it was then.

this event is a co-presentation of Crammed, Ancienne Belgique & les ateliers claus