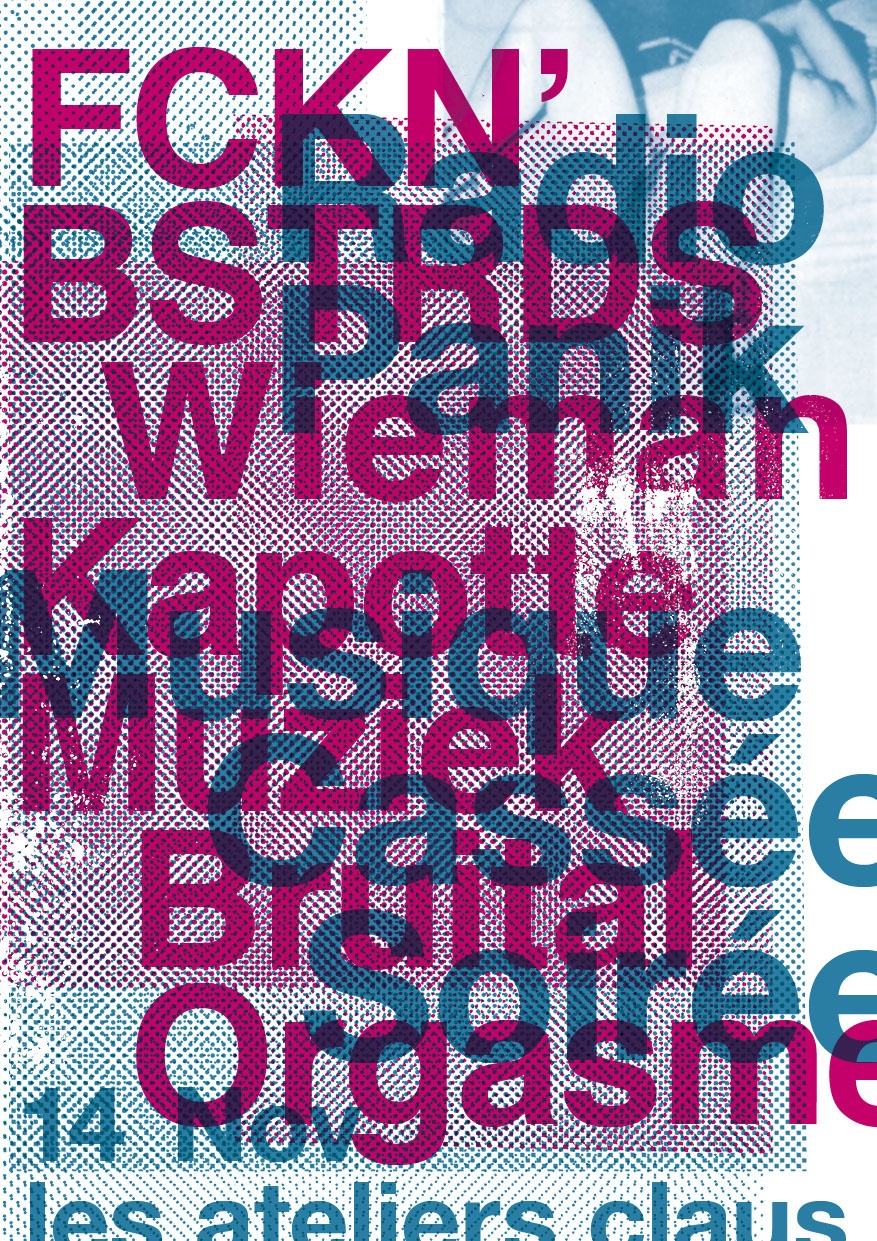 Frans de Waard started his band Kapotte Muziek in 1984 at the same time as he started his label, Korm Plastics. Ever since he has been involved in experimental music, either with his label, his job at Staalplaat (1992-2003), writing for Vital Weekly (from 1986 onwards) or his many bands/projects, such as Beequeen, Wander, Freiband, Ezdanitoff (with Wouter Jaspers), The Tobacconists (with Scott Foust) and Goem.

Frans started Goem in 1996 by experimenting with a rudimentary analogue sound (?) device and soon it also involved Roel Meelkop and a little bit later Peter Duimelinks (both of whom are also members of Kapotte Muziek).
Roel Meelkop had his solo no-wave/post punk band Happy Halloween in the mid 80s, but quickly became a member of THU20 and started a more electronic solo project called Mailcop. Following a few years of relative silence, mainly due to the lack of equipment which allowed Meelkop to create the music he had in mind, he started again, under his given name, and released albums on Trente Oiseaux, Staalplaat, 12K, Intransitive and other labels. In the late 90s he produced a number of dance 12"s as 'slo-fi'. Since 1993 he is a member of Kapotte Muziek and since 1996 of Goem.

Goem's minimal pulse driven rhythm pieces were picked up by Mego and Raster Noton and later by Staalplaat and 12K. The group played at the major electronic music festivals, such as Sonar and Mutek, as well as touring in the USA, Europe and Japan. The name Goem was taken from an expensive store in Moscow, where only high ranking party members could buy luxury items.
Meelkop and De Waard played for years with the idea to start a counter pop group called Wibra, named after the cheap clothing store chain in The Netherlands and in 2005 they released a 7" with a solo track per side; their first manifestation of Meltpop. They called themselves Zèbra, a contraction of Wibra and Zeeman, a similar cheap clothing store.

Their work deals with programmatic, thematically linked concepts. For their first CD, 'The Black And White Album', they used samples from songs with the word 'music'; this CD was released by Symbolic Interaction, who two years later withdrew the release. Later on Zèbra recorded a CD with samples of the work of Joy Division producer Martin Hannett ('Live In Leugen') and a cassette for Dutch label Limbabwe, entirely based on samples from tapes released previously on that label. In 2012, at the Ultra 2012 event, they played a set with samples from former Factory Records act Minny Pops, with the original singer Wally van Middendorp on two songs.

With Rotterdam based visual artist Ben Schot they have a long relationship which resulted in a performance called 'Mole's Milk', which they perform as part of a screening of Jodorowski's 'El Topo' and which was released on CD by Korm Plastics.

Although Zèbra has nothing to do with the animal of the same name, a US band called Zebra asked them to change the name, and from the remaining unused letters of Wibra and Zeeman, they came up with Wieman.

Kapotte Muziek is an electro-acoustic trio of Frans de Waard, Peter Duimelinks and Roel Meelkop. They play live concerts and never make studio recordings.During live performances Kapotte Muziek explore the minimum input of acoustic sound to a maximum extent. All sounds originate from obsolete materials that we have found in the course of our activities. Every performance is preceded by a 'junk search' to obtain new sound material. In the past we have used metal (from very small to very big), wood, paper, plastic, glass, stones etc. Every object is thoroughly explored for its sound qualities, amplified either by microphone or by contact-microphone. This is combined live with pre-recorded sounds of acoustic, environmental and electronic origin. In this line-up Kapotte Muziek exists since 1995. From 1993 to 1995 Kapotte Muziek were just Peter Duimelinks and Frans de Waard. Duimelinks and Meelkop are also a member of THU20 aswell as actively involved as solo musicians. De Waard also plays with Beequeen, and solo as Freiband and Shifts. Since 1993 Kapotte Muziek have played nearly 100 concerts around the world, including the USA, Canada, Japan and most European countries. They have played artgalleries, museums, squats, radio stations and rock clubs. Some of these concerts were part of a workshop, given by the members of Kapotte Muziek to untrained players, showing them how to produce sounds by amplifying and playing objects and making field recordings. They also played spontaneous concerts with people like Illusion Of Safety, Edwin van der Heide, Rumpeln, Co Caspar, the R.I.P. and others. Since 1997 they commision reworks of their concerts, which were first released as a 7" and these days on CD. People included are Thurston Moore, Asmus Tietchens, Troum, Illusion Of Safety, Lasse Marhaug, Leif Elggren, Stavostrand/Wiklund, Radboud Mens, Boca Raton, Toshiya Tsunoda, Richard Chartier and Stephan Mathieu. From 1984 up to 2003 Kapotte Muziek was also a solo studio project by Frans de Waard, who as such released a whole bunch of cassettes, LPs, CDs and CDRs. In 2003 the last release was 'Curing Without Killing', after which De Waard stopped playing solo as Kapotte Muziek.
A review of 'Praag/Rotterdam": Kapotte Muziek has been around in some form or another since 1984, when the name was coined for a project founded by Frans de Waard. Early on he teamed up with Christian Nijs, although they would not actually play together. Christian would record sounds on cassettes that he would give Frans to use as source material and manipulate, as he so desired. In 1987, Christian left Kapotte Muziek to focus on other musical endeavors and Frans continued on his own inviting other musicians to submit material for his manipulation. This approach resulted in Kapotte Muziek collaborations with well know acts like Merzbow, Odal and Yeast Culture. The mid-nineties saw Frans team up with Peter Duimelinks and Roel Meelkop for live performances. While working as a trio live, Frans still approached Kapotte Muziek's studio recordings as a solo endeavor. Kapotte Muziek's studio approach to using "found sounds" that have been created and by an outside party for their compositions is not mimicked live, though the groups approach is philosophically similar. In the Fluxist spirit, the group will find various debris before the show. Pieces of metal, wood, paper, plastic of all shapes and sizes are explored for their aural properties using microphones and contact microphones. These sounds are then combined and mixed live with some pre-recorded sounds of acoustic, environmental or electronic origin, to create a composition unique to that specific time and space. Thus a live performance becomes more of a happening that what we traditionally think of as a concert. Kapotte Muziek succeeds in blurring every possible line between art, performance, and music. Presented on this disc, a split label release from PACrec and Chrondritic Sound, are two live performances by Kapotte Muziek, clocking in at an hour and ten minutes total. Track one, entitled "Alternativa 95" was captured in Prague, Czech Republic on 14.12.1995. An incredibly slow moving drone creeping for close to forty-five minutes, Alternativa 95 is the sound of white noise carried in the wind, building slowly to a soft apex. The sound is not so much mountains and valleys as it is gently undulating hills. Moments near total silence are supported only by a faint rumble of bass that is felt more than heard. The second track "I Rip You, You Rip Me" is from a performance in Rotterdam, The Netherlands, on 12.06.1998. Its beginning is much more pronounced than its predecessor. Opening with a staccato rhythm built out of crunches of static then joined by piercing feedback that is reminiscent of a tea kettle that has reached a boil "I Rip You , You Rip Me" makes clear from the opening minutes that it is exploring slightly different territory. Though the low bass rumble is still present, this track investigates tones in the higher registers, tones that at times are so sharp and piercing they may make the listener wince. Together the two live documents featured on this album showcase the work of a band actively engaged with their surroundings. Creating sound works from objects gathered from the site of performance the featured compositions read as aural interpretations of the space in which these actions occur. One function of an artists is to present individuals with an alternate view of the familiar or that which is taken for granted. Kapotte Muziek does just this by creating sound which functions both as "music" and "conceptual art." Noise-Heads, and Conceptual Art Aficionados alike will become enveloped by the atmospheric drones offered on this album

«Distort the signal into a communicative tension, reaching the bodily effects of noise as music… The sounds of roaring sea is not far from white noise, but is not considered unpleasant &irritating… Disturbance…Psycho-acoustic tests… To the point where harsh noise is not considered unpleasant demands a training of the senses, a lack of restraint, allowing all sounds to be music, emancipating noise from its mimetic function, abstracting it as purely aesthetic... Shifting the focus from the notes to the sounds, by setting music as layered organized sounds, an implosion of meanings into the sublime... A convulsive beauty... A sensuous impression... An overload of the nervous system, maybe reflecting our inner & outer chaos... Absorbing the listener into an ecstatic black hole... Just like an orgasm...»

Bruital Orgasme is Fil & Nath, from Belgium. They play with frequencies, sounds they record during their travels, home made sounds generators, modified devices, lost and found sounds from many sources (as old vinyls, turntables without records, radios, tapes...)