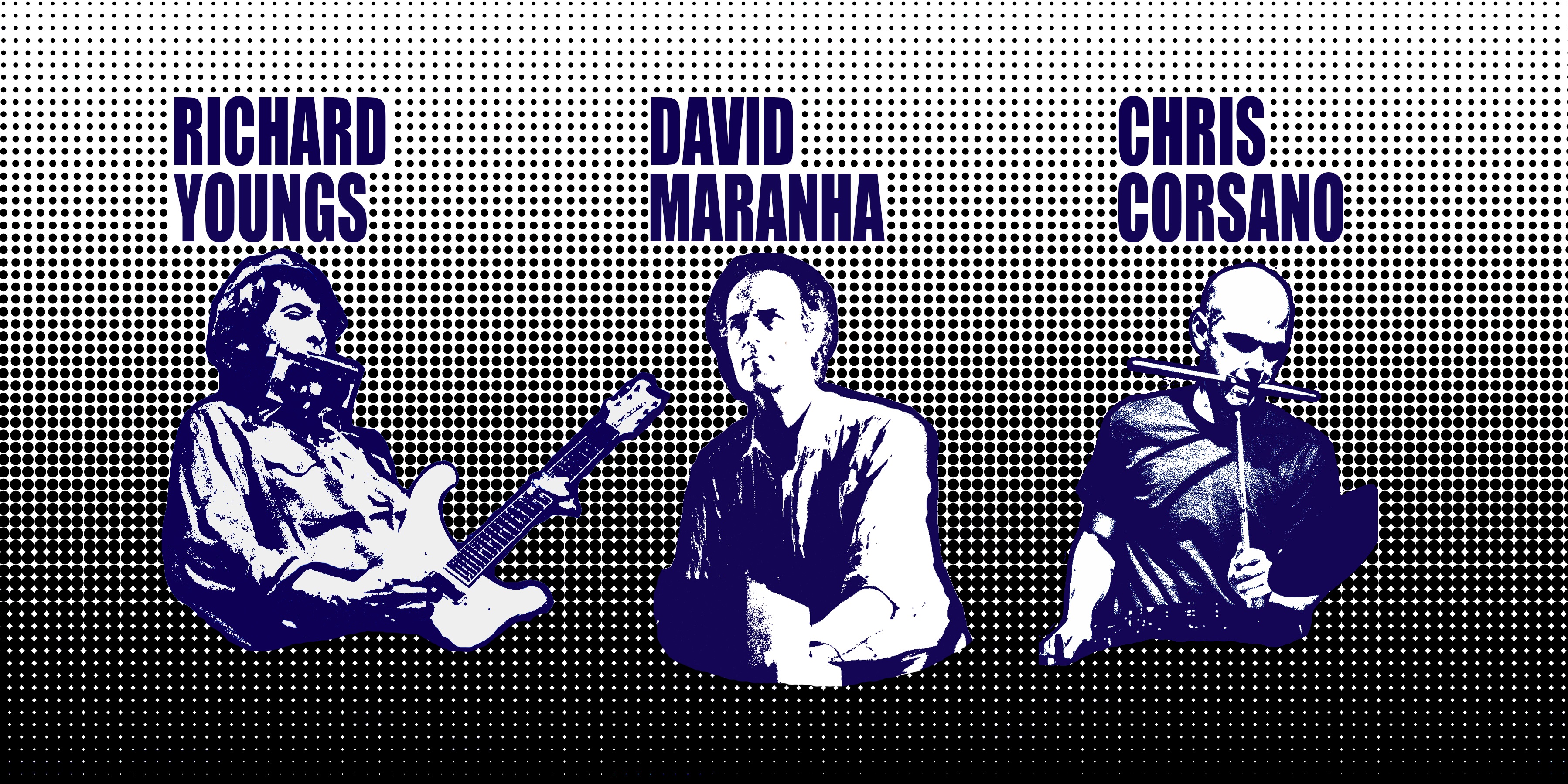 Youngs, Maranha & Corsano Opened up to virtually infinite possibilities, this is a blessed gathering by three of the most idiosyncratic and illuminated artists working in the sprawling field where the most defiant and unmapped musics converge. Leading figures of the unnamable, each of them on his own has created a superlative and indelible body of work, driven by their own vision and willingness to face the unknown. The same uncompromising position that presides over this trio. Let us embrace this with open hearts and minds. We shall be rewarded.

Glaswegian musician whose diverse and extremely prolific output sounds only like himself, Richard Youngs has carved a fascinating path that goes from folk infused reveries to devotional drone, from a capella hymns to electronic excursions and most points in-between with a singular vision and approach. Between song and improvisation, the multi-instrumentalist and singer's will to defy expectations while presenting such a unified and sprawling body of work - dozens of albums and collaborations on labels such as Jagjaguwar, Ba Da Bing! or No Fans - make him a true and humble innovator.

In an everlasting process that continuously repositions and reevaluates infinity as a consciously unachievable but ultimately rewarding goal since the 80's, David Maranha's music has been riding that arch with ferocity and aplomb. A unique vision that has been translating the ETERNAL in a sprawling language through countless performances, approaches and records like 'Marches of the New World' and the Roaratorio released classic 'Antarctica'. Always the unsettled mind, Maranha conveys his spiraling vision on the organ, percussion and violin through drone, improv or ritualistic excursions in different shapes.

Unstoppable north-american drummer whose lexicon seems to be constantly expanding into new and exciting forms, Chris Corsano is justifiably one of the most requested musicians within the improv, free jazz, out-rock, out everything spheres. Owner of a seemingly infinite power of reinvention and vision, Corsano has been travelling all over the globe with the most disparate but always relevant and visionary artists, such as Evan Parker, Jim O'Rourke, Thurston Moore, Paul Flaherty or Jandek, continuously advancing the potentialities of his instrument.

Lynn Cassiers is a Brussels based singer in the European new jazz and improv scene. In Belgium she has worked with contemporary jazz ensembles such as Octurn, The Brussels Jazz Orchestra, Mäâk. As singer/soundscaper she’s part of bands like Tape Cuts Tape (Trouvé/Cassiers/Thielemans), Lilly Joel, Oba Loba, Alexandra Grimal’s ‘Naga’, Jozef Dumoulin & Lidlboj,…

Lynn performs solo and as a sideman through Europe and elsewhere. She leads her own projects ‘Imaginary Band'(clean feed 2018) and ‘YUN'(jazz lab 2019). Recent collaborations include some new duo’s: ‘Konbini’ (with Pak Yan Lau), ‘Frankly Honest’ (with Hilde Holsen) and ‘On The Edge Of Memories’ ( with Sylvaine Hélary).

Raised in a musical family and despite her early roots as a teenage singer in her brother’s cover band, Lynn was introduced to jazz at an early age. She studied Jazz vocals at the Royal Conservatory of The Hague and had her first bands in that musical environment. Though soon enough her curiosity for contemporary music and other art forms drew her to the realm of ‘improvised music’ and ‘sound art’. She integrated a small set of electronics that ever since has grown organically around her musical needs.

Today, Lynn’s work suggests a wide variety of styles including free jazz, pop, rock, noise, film music, folk and ambient. As long it communicates is what matters to her. She likes to stimulate deviation and ambiguity, allowing the music to be vulnerable and very dynamic at the same time. She has a unique style, manipulating her voice to create abstract sound textures in a band or by herself.