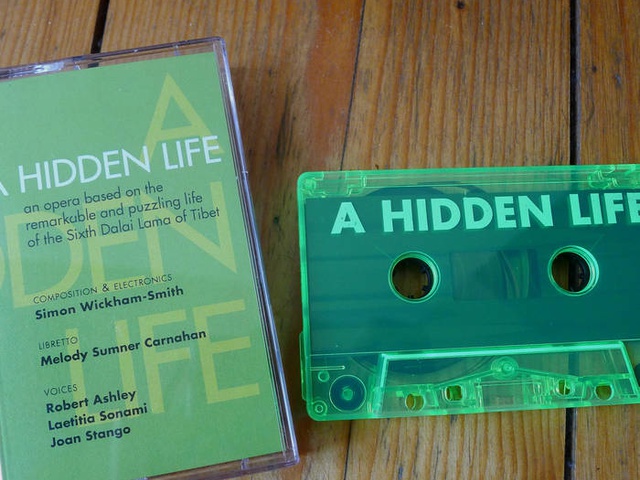 a review published by Vital Weekly

==========================================
SIMON WICKHAM-SMITH - A HIDDEN LIFE (cassette by Tanuki Records)
This seems quite a coup by Brussels based Tanuki Records: a ninety-minute tape by Simon Wickham-Smith, known as a solo musician but also a regular collaborator of Richard Youngs. That is one coup, but the title piece, which spans the whole first side, also contains the voice of the well-known composer Robert Ashley. 'A Hidden Life' deals with the life of Tshangyang Gyasto, the sixth Dalai Lama, who died in 1706. Wickham-Smith translated a book on Gyasto and had texts recited by Ashley and Laetitia Sonami, and some sung by Joan Stango. He himself provided the electronic background of repeating electronic sounds. The music seems to be coming without any changes and the emphasis lies on the text and the occasional song. This is all first class radio play stuff. Sit back and listen to the story, or perhaps just sit back and contemplate and listen to this as a piece of Zen sound art. Four instrumental pieces are to be found on the other side of Wickham-Smith's electronic music, and here to we find some of that meditative spirit. Whereas on 'A Hidden Life', it boils in the background, here it's out in the open and it moves between certain parameters, set out on whatever type of equipment he is using. It's like a perpetum mobile: once set in motion it moves around, freely, as wind-chime, but within certain boundaries. In 'Laude' this is pretty much a living organism, full of spirit, but in the other three pieces it seems to me it's all a bit darker, more calm and subdued, perhaps also spookier? Especially 'Cellules' seemed to posses some otherworldly spirits and ghosts captured on magnetic tape. Excellent release! (FdW)
released March 27, 2015
https://tanukirecords.bandcamp.com/album/a-hidden-life-and-other-works-by-simon-wickham-smith