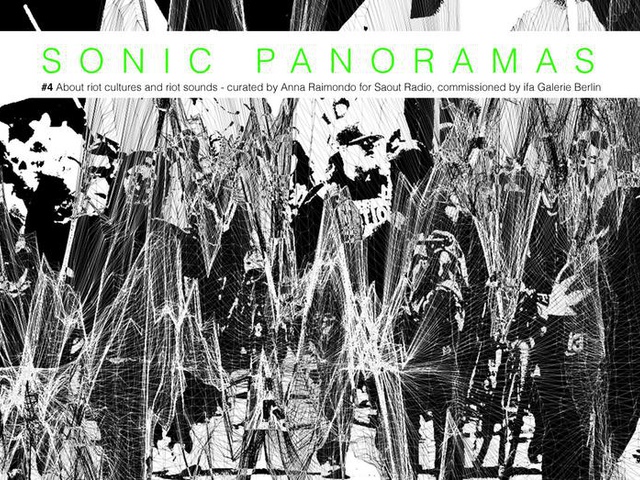 We are in Sonic Panoramas and we are speaking of riot cultures and resisting sounds,
we are speaking about silence as a form of active resistance,
we are speaking about non resistance as a form of resistance,
we are speaking about the power of activism and inspiring people.
Thinking about riot cultures, Jacques Attali’s Noise: The Political Economy of Music came to my mind. He
suggests that we should learn to judge a society on the basis of its noises more than its statistics. Noise could be
institutional and normative but it could also be the sound of a collective subversion. My attention switched from
the concept of riot cultures to the attempt of embracing the nature of riot sounds.
What could be classified as riot sounds?
Sonic Panoramas #4 - On riot cultures and riot sounds explore the interpretations of riot sounds
made by artists from different cultural horizons.
curated by Anna Raimondo for Saout Radio, commissioned by ifa Galerie
Written by Anna Raimondo
English translation’s editing: Adriano Giampietro and Marie-Eve Merckx
Communication: Chloé Despax
Design: Stefan Pollak
Artists: Acoustic Mirror (ES), Daniel Bargach Mitre (VEN/BOL), Cristian Espinoza (CL/ARG), Hagaiz Eizenberg
(ISR),Bárbara González Barrera (CL), Brandon LaBelle (DE), Radio Alice (IT), Anna Raimondo (IT), Felipe Rodríguez
Gómez (CO), Griselda Sánchez (MEX), Silence ça urge! (FR)
www.saoutradio.com

PLAY LIST
(((o))) Acoustic Mirror lives and works in Madrid, Es
http://acousticmirror.tumblr.com
Plazatomada/reverb, 2018
#plazatomada/reverb is a short radio piece that revisits what I believe
was a crucial moment during the 2011 #15M occupation movement
in Madrid Spain. The work is based on field recordings produced
during the heady days of early August 2011, when, in preparation for
the Pope’s visit to Madrid, the local authorities decided to evict and
cordon off Puerta del Sol, Madrid’s central square and the site of the
#AcampadaSol occupation between May and July 2011.
During these days, protesters adhered to the principles of non-
violent protest that had been so important for the #15 movement,
and, instead of trying to force their way back into the square, pro-
ceeded to lay siege to the whole city centre. Three days later, the
authorities gave up and the square was taken again.
Against a tradition which represents riots as confrontational, violent,
and suspiciously masculine contexts, these acts proved to be a true
demonstration of collective intelligence - a rare thing, even back in
the contexts of Spain’s #15M movement in the summer of 2011.

Anna Raimondo born in Naples in 1981. She lives in Brussels and
works internationally
www.annaraimondo.com
Untitled (Silences and hesitations), 2012
Silence, over the language and its structure, could question or
resist the dualism between genders. These particular silences
issued by the personal archive of the artist and her collection
of interviews with female musicians, singers and composers
conceptually emphasize the official historiography’s hesitations to
include women in musical canons.

Brandon LaBelle born in 1969, Memphis. Lives in Berlin.
Speculations on the lyrical imagination of the resistant, the
lazy and the hopeful - Recorded live as part of Club Transmediale,
Bethanien, Berlin, 2015. Excerpt.
The trembling voice, the determined gaze, the soft touch, the pouting
lip, the pain of freedom, the frog in the throat, the distant horizon, the
sudden burst, the gathering crowd, the forgotten words, the unknown
outcome, the social energy, the lonely thought, the dispossessed,
the longing and the nation, the disciplinary grip, the body on the
run, the lost tribe, and the friendship, the flickering light, the moon
overhead, the remembrance of things, the quiet hour, the dark alley,
the unforgettable sound, the afternoon that drifts, the road to nowhere,
and the sign up ahead, the song that made me stop, the whisper, the
encounter, the apparatus, the writing on the wall, and the broken drum.

Cristian Espinoza born in 1976, in Santiago de Chile (CL). He lives
and works in Buenos Aires (ARG) and Santiago (CL).
http://fabulasmecanicas.wordpress.com
DECEMBER 18 ́S CACEROLAZO, 18 Dic 2017
The sound documentation was recorded during a warm night  of
the summer solstice in the streets of Buenos Aires.  In the middle
of a political crisis produced by the structural changes requested
by the FMI to the conservative goberment, appears in all the city
this local form of protest where people make strident sounds using
their kitchen utensils as cooking pots, frying pan, spoons, etc.

Daniel Bargach Mitre born in 1977, in Caracas, Venezuela. Lives
and works in La Paz, Bolivia.
www.danielbargachmitre.com
#YOSOYTU, 2016
Rosmery Guarita is the leader of people with disabilities in Bolivia. In
2016 harshly faced the government of Evo Morales. She and several
of her companions decided to use their wheelchairs to travel 370km
from Cochabamba to La Paz to demand their rights.
I turn her wheelchair into a sound object, it activates when you sit on it.

Felipe Rodríguez Gómez, lives and works in Colombia
https://carmajournal.org/home/
Plazarte cultural, 2017
On December 26, 2017, the police with the help of the S.M.A.D
arbitrarily evicted Plazarte cultural center, violating fundamental
rights of the visitors and the resident community. Plazarte cultural
center is a space for cultural and community construction, which in
the last 9 years has contributed independently to the improvement
of the social conditions of the neighborhood and to the artists of
the city, activating a living heritage space for the people in Medellín.

Griselda Sánchez, lives and works in México
Palabrandar, 2017, produced by Radio Tsonami
Community radios, with more than fifty years in Latin America, play a
key role among the voices that suggest other real and possible worlds.
In order to cut them off, the states use carrier signals, interferences and
confiscations, thus becoming spaces of dispute in the radio spectrum.
Palabrandar is based on soundscapes, identifiers, radio slots and
songs from different radios of the continent: Ucamara, Ñu Kaan,
Jempoj, La Voz Lenca, Ñomdaa, Insurgente, CRIC, América Profunda,
and with audio files of Radio Universidad, Plantón and Venceremos.

hagai eizenberg, born in Israel in 1978. he lives and works in Israel
http://www.hagaizenberg.com/
24 Hours, 2016, Length: 5:38
On March 24th 2016 there was a shooting incident that soon
became another terrible milestone in Israel-Palestine relations
called The Hebron shooting incident. A Palestinian assailant
stabbed an Israeli soldier, and as a result was shot, wounded and
“neutralized”, and afterwards was shot again in the head by an IDF
soldier, as he lay wounded on the ground. The second shooting
was videotaped and released by the news later that day.
This work takes 24 consecutive news editions of that one single day
(news on the radio are broadcast every hour) and attempt to show
evolution of the story - beginning with the Palestinian stabbing the
soldier, and later during the day after the videotape was released -
the story of the Israeli soldier shooting the Palestinian in the head
after he was neutralized.

Collectif ‘Silence ça urge’
Citizen Yoga (Utopie Sonore 2017)
The permanent state of alert in France could be experienced as a
break for the search for your well-being.
We live in a world where it is more and more difficult to escape
anxiety and parasitic thoughts. To help you, the Ministry of Inner
Health offers this daily program of citizen relaxation. Sit on your
carpet and let yourself be guided to find your way to relax ...