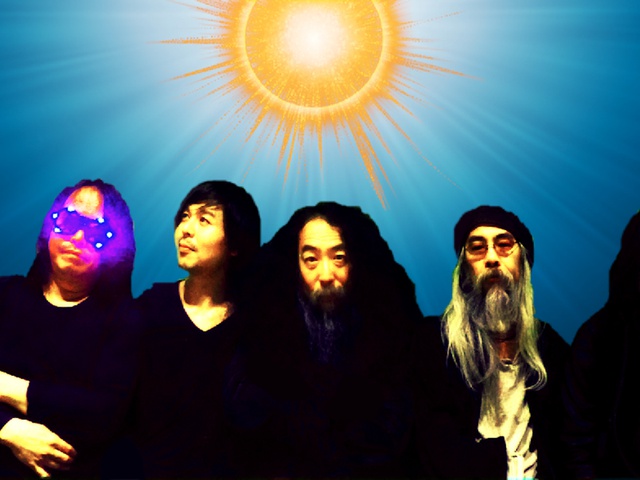 Tonight we have the great honour to broadcast the concerts of Acid Mothers Temple & The Melting Paraiso UFO and Piloot at the Magasin 4, Avenue du Port 51 B, Brussels, Belgium.

The sprawling universe of that is Acid Mothers Temple was formed in 1995 by Kawabata Makoto. Originally titled the Acid Mothers Temple soul-collective and encompassing musicians, dancers, artists, farmers, channellers, ex-yakuza, mermaid researchers and professional vagrants, the collective has always had at its core a dedication to improvised music. Now with a history of over two decades, and a discography of over one hundred releases, which is not to mention the numerous solo and side-project releases which encompass everything from drone, acid-folk, acapella, to minimalist composition, the group show no signs of relenting in the pace of their creative energy.

Acid Mothers Temple & The Melting Paraiso UFO is the most prominent incarnation of the AMT collective, featuring founders Kawabata and Higashi, long term member Tabata, plus the newly recruited rhythm section of Sakamoto and Uchida who joined the group in 2015. The band tour the world prolifically every year.

Read more about the Acid Mothers Temple universe at their website http://acidmothers.com/.

P I L O O T is an astral journey driven by pulsating improvisations leaving you swirling in kaleidoscopic, euphoric and soothing soundscapes.

The eponym debut album delivers 5 instant compositions, a Hypnotic Krautrock in search of a trance-like feeling through repetitive patterns, drones and ecstatic chaos. A leap into the void between impermanence and resurgence; a fine balance between the unexpected and the unforeseen."

"P I L O O T : «This trio is probably the best possibility to experience the pinnacle of improv-free-rock-kraut-jazz that a combo like CAN sublimely offered its audience in the 70’ s» Rodolphe Coster