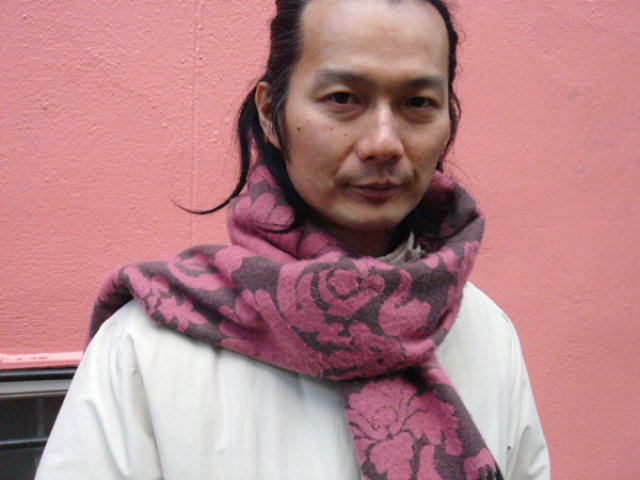 This week we have two interviews for this show. Aki Onda the first hour, followed by a concert of Aki Onda & Akio Suzuki, the second hour it is Akio Suzuki who will talks about his music.

We have also 2 X 1 free tickets for their concert at les ateliers claus in Brussels on the 13th of march. Send an e-mail to moacrealsloa@yahoo.fr where you explain why it must be you who have right to one of these tickets.You can write your story into english, french, german or dutch. Take your chance! Your mail must arrive before the 10th of march, 10 pm (GMT+1). Those who are the lucky one will receive an email on Wednesday the 11th before 10am (GMT+1)

Onda was born in Nara, Japan, on August 27, 1967. He was brought up in an unusual and eccentric environment that stimulated him artistically. His mother was a painter and his father was a university professor and former Olympic hockey player. Onda studied painting, textiles and photography from an early age, although he dropped out of formal education. Onda started his career as a photographer when he was 16 years old. His first assignment was to take photographs of musicians for magazines in Osaka and Kyoto. Through numerous photo shoots he became acquainted with many well-known musicians and decided to become a musician himself. He started making music with the sampler and computer, and formed Audio Sports with Eye Yamatsuka and Nobukazu Takemura in Osaka in 1990. After releasing the group's first album, Onda moved to Tokyo and established himself as a producer. He soon became a sought-after studio technician because of his in-depth knowledge of music production. As a result, he was involved in nearly 100 projects in Japan while still in his twenties. From 1996 to 1997, Onda set up a base in London and recorded his solo albums Beautiful Contradiction and Un Petit Tour, which reflected his visual and poetic sensibility. Soon he released two more albums: Precious Moment, in 2001, and Don't Say Anything, in 2002. All four albums are personal soundscapes that he calls "radio dramas." Each contains a different story, with or without text.

Onda is particularly known for his Cassette Memories project – works compiled from a “sound diary” of field-recordings collected by Onda over a span of two decades. He released the first album of the series in 2003, under the title Ancient & Modern, followed by the second album, Bon Voyage!

Onda has also been working on his audio-visual project Cinemage – “image for cinema," or "homage for cinema." It is composed of slide projections of still photo images, shot by Onda, as a performance or installation.

Between 2000 and 2003, Onda was a visiting scholar at the Electro-Acoustic Music Studio at Dartmouth College in New Hampshire, of which composer Jon Appleton serves as director. In 2008, Onda awarded New York Foundation for the Arts (NYFA) Grant. In 2012, Onda awarded two residencies, International Residences at Récollets in Paris and ISUE Project Room Artist-in-Residence in New York.

Along with his activities on the music scene, Onda has been exploring expression through photography. In 2001 and 2002, he had two photo exhibitions at Anthology Film Archives in New York, which is run by filmmaker Jonas Mekas.

Onda's critical thought and unique sensibility in understanding music are manifest in numerous articles and reviews he has written for Japanese magazines such as Improvised Music from Japan and Studio Voice. Many underground musicians and composers have become acquainted with each other in Japan through his writings.

Onda is also active as an independent curator. He has curated several major performances and exhibitions throughout North America, including events of Japanese artists at The Kitchen (New York), Images Festival (Toronto) and Time-Based Art Festival (Portland).