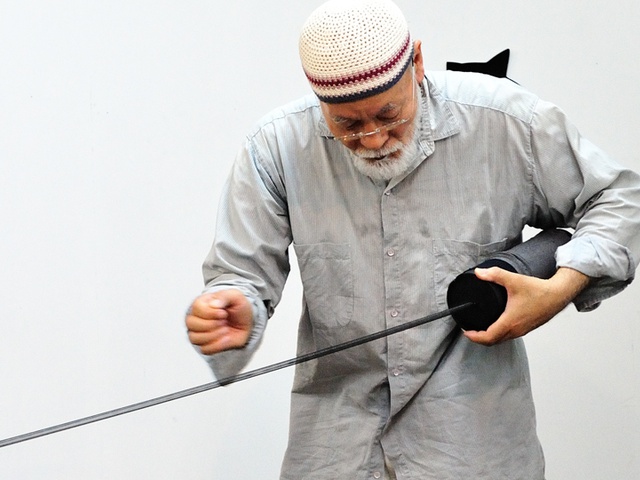 This second hour we will have a live concert of Akio Suzuki and Aki Onda followed by an interview with Akio Suzuki in english and japanese!

We have also 2 X 1 free tickets for their concert at les ateliers claus in Brussels on the 13th of march. Send an e-mail to moacrealsloa@yahoo.fr where you explain why it must be you who have right to one of these tickets.You can write your story into english, french, german or dutch. Take your chance! Your mail must arrive before the 10th of march, 10 pm (GMT+1). Those who are the lucky one will receive an email on Wednesday the 11th before 10am (GMT+1)

Akio Suzuki is known as a pioneer of sound art, but the breadth of his activities and the form of his works far exceeds the normal boundaries of sound art. It is perhaps more as a "quester after sound and space" that he has received the most attention from artists in many fields.
Suzuki's journey as an artist began in 1963 with a performance at Nagoya station, in which he threw a bucket full of junk down a staircase. The inspiration behind this performance - the idea that if one were to hurl an object down a well-balanced stairway, a pleasant rhythm might be the result - took the desire to "listen" as its subject. That desire to hear, to listen has remained the one constant in Suzuki's stance as an artist.

During the sixties, Suzuki's sense of playfulness led him to undertake a series of Self-Study Events, where he explored the processes of "throwing" and "following", taking the natural world as his collaborator. The experiences he gained in these events led him in the seventies to invent an echo instrument he named Analapos. The instrument's structure resembles that of two mirrors facing each other, reflecting into infinity. As an extension of the principles underlying Analapos, Suzuki constructed the Hinatabokko no kukan (Space in the Sun) in 1988. This space consists of two huge parallel walls, in between which the artist can sit all day and purify his hearing by listening to the reflected sounds of nature. This space leads the artist to discover a new method of listening. Suzuki himself comments, "Sound, which had been conceptually imprisoned in various spaces, is freed to circle the world."

From the late seventies and through the eighties, Suzuki also developed a form of performance he refers to as Conceptual Soundwork. Applying a number of self-imposed, simple and austere rules, he uses objects close at hand in a mode of "intellectual play". While these events do on the one hand express a critique of meaningless improvised performance, at the same time Suzuki is constantly aware of the audience's process of listening and he attempts to create contemporaneous connections with the site of performance. It was around this time that Suzuki began to travel frequently to the US and Europe, and his performances at leading music festivals, Festival d'Automne (Paris, 1978) and Documenta 8 (Kassel, 1987) were rapturously received.

As sound art enjoyed a period of prosperity in the nineties, Suzuki was given the chance to create many installations, particularly in Berlin. Worthy of special note were his soundless installations, such as Otodate (Echo point, 1996) in Berlin, Enghien-les-Bains (since 1997, http://www.insitu-enghien.org/) and Strasbourg; Hana (Flower, 1997) at the Stadtgalarie Saarbrucken; and Pyramid (1999) which involved people excavating sounds. These soundless pieces were not designed to critique the old perceptual theories of music, rather they questioned the very location of music. Through their encounter with these works, the past experiences and memories of viewers were reconstructed as new experiences. This process was fundamental to the action of "listening" to the works.

In recent years, the insights he gained from the Turbridge (1999-2000) installation at the Daad Gallery in Berlin have opened up new avenues of development for his future work. By recording and creating sound sources himself, and by using electric amplification with Suzuki's own self-designed output devices, he was able to reconstruct sounds and experiment with listening to the "factors of place". These experiments were followed up by the sound-drawing Mowe (Seagull, 2002) for the Berlin radio station SFB, and Nagekake & Tadori (Throwing and Following, 2002) which included some suggestions towards the construction of place. Visitors to the latter were able to experience a "place established by the artist as a wholly different space and time axis."

To run simultaneously with these experiments, Suzuki has started the Mogari series since 2002 at the Brunei Gallery at the School of Oriental & African Studies in London. This series centres around unbelievably powerful performances on iwabue - ancient and naturally-sculpted stone flutes which have been handed down in Suzuki's family. Using these ancient instruments Suzuki sculpts time and place, and through their music he searches for his own end..

Francisco López is internationally recognized figures of the sound art and experimental music scene. For more then forty years he has developed ...