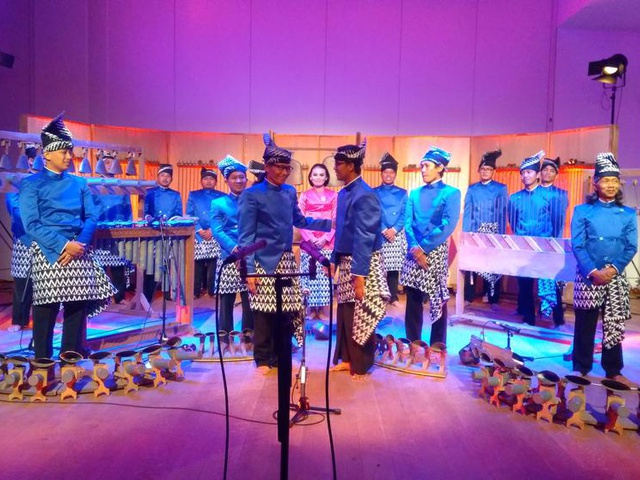 Tonight our guest is the Javanese composer and instrument inventor Aloysius Suwardi with a talk and live gamelan concert. ALOYSIUS SUWARDI - PLANET HARMONIK INDONESIA •••• © Witjak Widhi Cahya-Komunitas Salihara Nicknamed ‘the man with a thousand talents’, Aloysius Suwardi is not only an internationally renowned Indonesian gamelan composer, but also a university professor, a tuner, an inventor of experimental instruments and an ethnomusicologist. His “Planet Harmonik” project will be presented for the first time outside of Indonesia, relies on the Pythagorean idea of musica universalis, in which the distances between the planets correspond to the intervals between musical notes, and the Sun, the Moon and the Earth produce their own tonality. Aloysius Suwardi built a number of instruments for this project, including motorised metallophones, enormous African-inspired gambang xylophones and hydraulic bamboo flutes, resulting in a completely unique sound. Scheduled as part of Europalia, “Planet Harmonik” is an ingenious project that is decidedly future-oriented, which has its roots in Greek antiquity and the gamelan’s rich history.