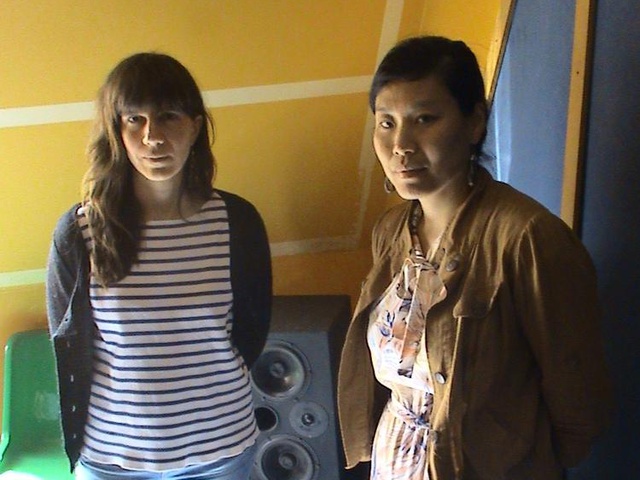 Podcast available of the radio session with interview. To listen click on the 3 icon (flash down) just above here.

Bonnie Jones (electronics) and Dafne Vicente-Sandoval (bassoon) create improvised music exploring the minute and unpredictable sonic fluctuations of metal, wood, and circuit board. Vicente-Sandoval's deconstructed bassoon playing turns sound into raw materials - shaped and sculpted by breath and saliva. Jones plays the exposed circuit boards of digital delay pedals using her hands to physically alter and disrupt the electrical signals that produce sound. The resulting collaboration is a rich and exciting contradiction, a music of simultaneous making and unmaking.

Bonnie Jones is a Korean-American writer, improvising musician, and performer working primarily with electronic music and text. Born in 1977 in South Korea she was raised on a dairy farm in New Jersey, and currently resides in Baltimore, MD. Jones creates improvised and composed text-sound performances that explore the fluidity and function of electronic noise (field recordings, circuit bending) and text (poetry, found, spoken). She is interested in how people perceive, “read” and interact with these sounds and texts given our current technological moment.

As a musician and improviser she re-purposes digital delay pedals as circuit-bent electronic instruments, directly playing the exposed circuit boards with instrument cables to produce raw and often chaotic electronic sound. Her sound palette challenges the accepted languages of contemporary music as well as the conventional modes of playing associated with electronic musicians. Jones’ multimedia performance works use projected text and live writing to improvise with musicians, video artists, dancers, and other writers. The work draws on her background as a poet and explores a form of writing "off-the-page" that directly interacts with the audience and other collaborators.

Jones has performed her work in the US, Europe and Asia, and has appeared in the Christian Marclay Festival at the Whitney (NYC,) ErstQuake Festival (NYC), No Idea Festival (TX), Cha’ ak’ ab Paaxil Festival (Mexico), and High Zero Festival (MD). She has ongoing collaborations with musicians, visual artists, and writers including Andrea Neumann, Toshimaru Nakamura, Carla Harryman, and others. Jones has received several awards and recognitions including a Fulbright Fellowship, grants from Meet the Composer, and artist residencies at STEIM (Amsterdam, NL) and Q02 (Brussels, BE.) She has been a visiting artist at Wesleyan College, University of Maryland, Dartington College at the University of Falmouth (UK), and has conducted workshops on electronic music, improvisation, and technology. She was also the curator and co-founder of the Transmodern Festival, and curator / organizer of the Los Solos Series (a performance series presenting solo works of female artists). Jones received her MFA from the Milton Avery School for the Arts at Bard College. www.bonniejones.wordpress.com

Dafne is a bassoon player, working in both fields of contemporary music and non-idiomatic improvisation. Her recent work includes a series of integrated sound installations.

Her personal approach is centered on the fragility of sound and its emergence within a given space. Silence and barely perceptible sounds are central to her work; she considers music more as the punctuating of a preexisting sonorous environment, rather than an out of context, autonomous discourse.

The deconstructed usage of her instrument is a central aspect of her practice. She amplifies fragments through miniature microphones distributed within the instrument. This exploded version of her sound sometimes meets traditional bassoon playing to generate aural discontinuities between the exterior and the interior, the whole and the parts- a reverseengineered emergence.

She currently plays in duo with Klaus Filip, Angélica Castelló and Xavier Lopez; as well as in trio with Sébastien Cirotteau and Lawrence Williams.

She has recorded Solo II and Praha, two compositions of Jakob Ullmann released by Edition RZ in April 2012 as part of the cd box Fremde zeit addendum.