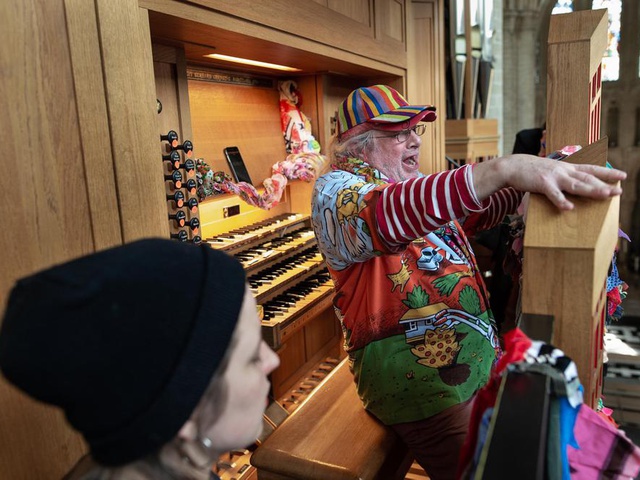 Tonight the Charlemagne Palestine will let us discover his Charles World in the first part of 2. This Russian / American artist living for now about 20 years in Brussels will present his "AA SSCHMMETTRROOSSPPECCTIVVE" in the BOZAR in Brussels. After 44 1/2 year his is back with an exhibition to celebrate his 70th anniversary!

Tuesday the 29/5 the second part : http://www.radiopanik.org/emissions/moacrealsloa/charlemagne-palestine-interview-live-part-2/

Charlemagne Palestine was born in Brooklyn NYC in 1947. He is a sound artist, composer, performer, video artist and installation artist. Palestine studied at New York University, Columbia University, Mannes College of Music, and the California Institute of the Arts.

A contemporary of Philip Glass, Terry Riley, Phill Niblock, and Tony Conrad; Palestine creates intense, ritualistic, continuum music for electronic sound sources, bell carillons, pipe organs, pianos, voice and other keyboard instruments since the sixties. A composer-performer originally trained to be a cantor, and then a carillonneur; he always performs his own works as soloist. His electronic continuums were his first major pieces. He early on began developing sonorities especially with large numbers of electronic sound oscillators and filters developed by Moog, Buchla, Serge, Arp and Oberheim. These sonorities lasted from several hours to days exploring slow gradual timbral color transformations and beat tone variations creating what he termed his "Golden Sonorities” or the search for the Golden Sound. His continuum form “Strumming” for amplified pianos, develops harmonies, dissonances and clusters with a visceral physical force that pushes the sonic limits of a piano till it no longer resembles one, even often naturally detunes from the force and becomes a new kind of multi spectrum electro-acoustic sound emitting machine. His favorite pianos are the 9 foot long Bösendorfer Imperial which has 9 tones lower than any other piano in the world and the Borgato which is a grand piano with 2 bodies; one played with the hands and one with the feet.
His “Schlingen Blängens”, a sonic continuums form for pipe organs where like in alchemy all the different and varied timbral registers of a traditional church or theatre organ are merged and developed searching for the Golden Sound, using a unique continuum key prolonging technique that allows Palestine to create works developing hundreds to thousands of nuances of organ timbres becoming a massive magical sonorous vibrating storm cloud that interacts with the architecture of each church or theatre edifice. As a vocalist in his epic 2 hour long Karenina he sings in a haunting ghostlike countertenor falsetto register and in other works like his sound/motion videos he sings long tones with gradually shifting vowels and overtones while moving through spaces and places while performing repetitive intense shamanic body action rituals such as throwing himself against walls; running and falling in labyrinthal spaces; singing on high speed motorbikes or while on roller coasters and other amusement park intense motion rides.
Palestine stopped performing from the early eighties till the mid nineties and devoted himself entirely to his forms of plush animal divinity altars as multi-media sculptures and installations. These altars are always an integral ingredient in Palestine’s performances. Since his return to performing Palestine has reissued works from the sixties and seventies on CD and vinyl, created and recorded many new works and has collaborated and recorded with other musicians such as Pansonic, Simone Forti, Tony Conrad, Rhys Chatham, Perlonex, Gol, among others. He now performs regularly in venues and festivals as well as presenting his multimedia installations worldwide. Charlemagne lives and works in Brussels, Belgium