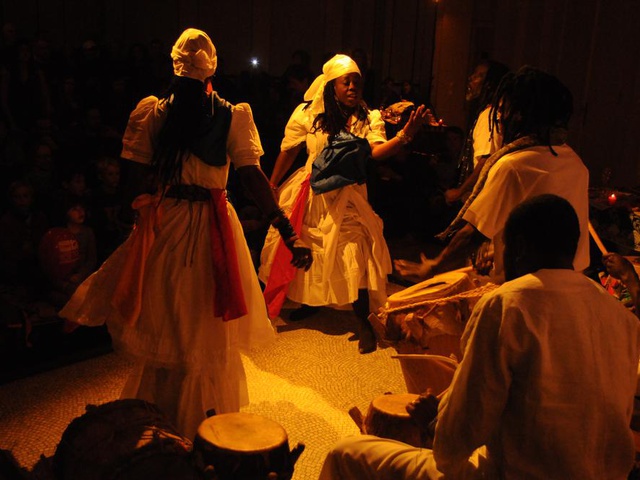 « The word hardcore is often applied to denote a style that contains a
strong message. Se nou ki la! is perhaps the first international release
of hardcore Haitian roots music, an intense, hypnotic mixture of drums
and call-and-response vocals, recorded in the remote Petite Rivière
Bayonnais, a village where the soul of voodoo holds tight. »

Nick Hobbs, fRoots
I can't remember seeing any artist from Haiti before at Womex.
They're a brightly-coloured and decorated acoustic 6. The music
sounds happily traditional and is based on call-and-response choral
vocals (in creole I think) and percussion. They also shimmy. And they
shift gears going from warm to hot with ease. It's 2 days past my
bedtime and they're last on tonight but I stay. They're very nice,
would be wonderful for any festival - and not just world music
(whatever that is). I remember that I'm also a voodoo child and close
my eyes, let my body move, and am in that place where time rolls
away before the magic of trance. Very lovely.
https://www.facebook.com/frootsmag/posts/555844944570153

Mina Zhou, Spin.com
« Haitian roots band Chouk Bwa Libète had a similar if more hyped,
azonto-less effect on the crowd. When they hopped off the stage and
into the melee, I saw a couple of hippies nearly keel over from… joy?
Thirst? Authenticity overload? We may never know. »
http://www.spin.com/2015/11/world-music-expo-2015-recap-ana-tijoux/
BBC Radio 3, World on 3 - Lopa Kothari
http://www.bbc.co.uk/programmes/p036dl1q