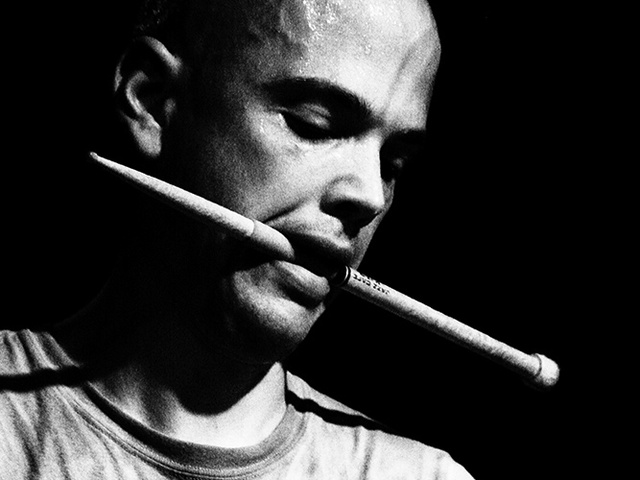 Tonight our guest is Chris Corsano! Part 1 of 2.

Here the second part also with the podcast : http://www.radiopanik.org/emissions/moacrealsloa/chris-corsano-part-2-interview-live/

Chris Corsano : What do we mean by coaching? (The Young Cricketer - Hot Car Warps Records - 2006)

Chris Corsano : What movement helps you when you are trying to  run out a batsman? (The Young Cricketer - Hot Car Warps Records - 2006)

"...seriously one of the most exciting drummers on the planet." -Adam Richards, indieworkshop.com

Chris Corsano is a drummer who has been working at the intersections of collective improvisation, free jazz, avant-rock, and noise music since the late 1990's. He began a long-standing, high-energy musical partnership with saxophonist Paul Flaherty in 1998. Their style, which they occasionally refer to with (semi-)tongue-in-cheek humor as "The Hated Music", infuses modern free-jazz's ecstatic collectivism with the urgency and intensity of hardcore punk.

A move from western Massachusetts to the UK in 2005 led Corsano to concentrate on his solo music, an always-spontaneously-composed amalgam of extended techniques for drum set and non-percussion instruments of his own making incorporated into his kit: e.g. violin strings stretched across drum heads, modified reed instruments that transform the drums into resonators which can, in turn, be used to incite strips of metal to react to the drum membranes' Chladni-plate-like modes of vibration, etc. In February 2006, Corsano released his first solo recording, The Young Cricketer, and toured extensively throughout Europe, USA, and Japan. He spent 2007 and '08 as the drummer on Björk's Volta world tour, all the while weaving in shows and recordings on his days off with the likes of Evan Parker, Virginia Genta, C. Spencer Yeh, and Jandek.

Moving back to the U.S. in 2009, Corsano returned focus to his own projects, including a duo with Michael Flower, Vampire Belt (with Bill Nace), Rangda (with Richard Bishop and Ben Chasny) and his solo work, further expanded in its use of contact microphones and synthesizers. In 2017, he received the prestigious Foundation for Contemporary Arts Grants to Artist Award.