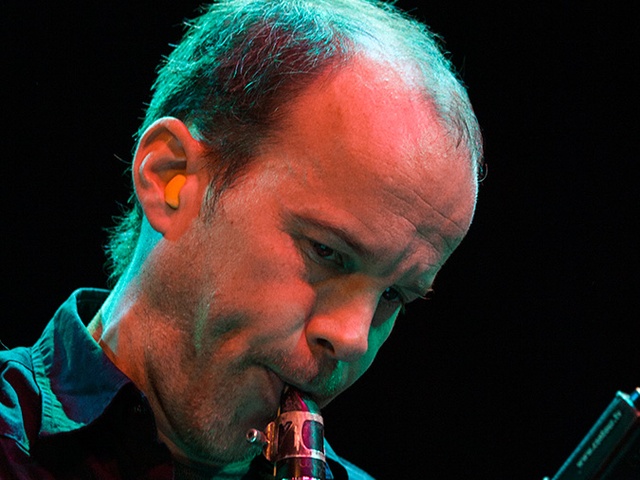 Chris Speed is a tenor saxophonist, clarinetist and composer, whose work ranges widely, from a jazz base out through various forms of folk, classical and rock music. Affiliated with a bewildering variety of ensembles, he has been a prominent and influential voice in jazz and improvised music for more then three decades.

Speed grew up in the Seattle area where he met future colleagues Jim Black and Andrew D'Angelo, all of whom ended up in Boston in the late 80's where they formed Human Feel with guitarist Kurt Rosenwinkel.

After studies at New England Conservatory followed by a stint with the Artie Shaw Band (led by Dick Johnson), Speed moved to New York City where he started working with Tim Berne and his band Bloodcount.

Chris's fascination with the mysterious rhythms, melodies and old-worldness of folk music from the Balkans led to the formation of Pachora (drums Jim Black, guitarist Brad Shepik and bassist Skuli Sverrisson), a rambunctious ensemble that evolved from playing East European folk music covers regularly at the Knitting Factory to touring critically acclaimed original music throughout North America and Europe

Yeah NO, Speed's band with Black/Sverrisson and Cuong Vu (trumpet) initially convened as an experiment in decoding and scoring out group improvisations, which inspired an unusual book of music that also fused elements of jazz, rock, eastern folk and weird minimalism.

The Clarinets (with Oscar Noriega and Anthony Burr) explores the possibilities of the clarinet (multi-pitch tones, timbre deviation) in the context of group improvisation. This group blurs the boundary between composed chamber music and experimental improvisation and creates an acoustic ambient music of unusual grace and beauty.

With the formation of the Chris Speed Trio in 2014 with drummer Dave King (The Bad Plus) and bassist Chris Tordini, Speed has put an inimitable stamp on the classic sax-bass-drums format. This is a group returning from other explorations to work deep within the jazz tradition, bringing everything else they've learned back in. Most compelling about this music is the incorporation of early jazz styles in a way that is direct and deeply felt. The music is joyful and generous and Speed has an uncanny knack for coming up with tunes that can create a whole world of emotions and formal possibilities behind an often catchy melodic surface.

Broken Shadows (Tim Berne, Reid Anderson, Dave King, Speed) is a quartet of kindred spirits communing over shared loves and common inspirations; banded together to reinterpret the timeless sounds conjured by great artists from the rural South and heartland of  the country, primarily Ornette Coleman and Julius Hemphill. The way saxophonists Berne and Speed perform this music with the bass-and-drum team of  Anderson and King has a rocking, roughhewn harmonic convergence wholly in keeping with the source  materials, even as their improvisations have a searching, burning modernism of their own.