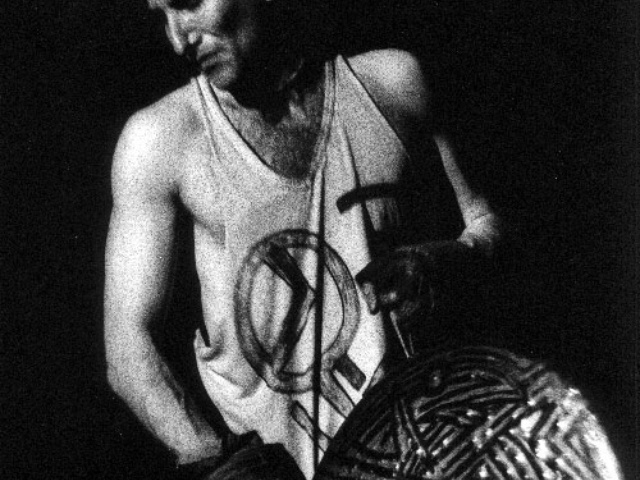 This giant passed away last weekend.

Message from Boyd Rice : Just received word that long time friend Z'EV just died. Cause uncertain at this time, but he had spitting up blood recently. He spent last winter in our guest bedroom pursuant to the train derailment he was airlifted from, because his doctor told him he may not survive a winter in Chicago. And the man we met at Denver international airport was a shadow of the person I've known for over four decades. His spirit was still tough as nails but physically he seemed devastated and had difficulty ascending the stairs to his room. Three and a half months later much of his strength seemed restored; he had survived the winter and the outlook seemed good. We had recently heard from him that he was doing some shows in Mexico and was going to spend this winter in Santa Fe. I'd assumed that even if he would never be 100% again he was at least back on his game. I had convinced him to release a box set of recordings through a German company that would chronicle his entire career and that I would write the perfect liner notes for it. I would say that Z'EV was to the avant garde what Iggy Pop was to rock and roll: total intensity, energy and raw power and he often left the stage in the early eighties cut up and bleeding from the injuries he received from his own instruments. I'd made extensive notes for my text and look forward to promoting the life and career of a man I thought was one of the most under appreciated figures in modern music. A linguist, an ethnomusicologist, a scholar, a mystic; but a man who could distill all this into a performance so intense that it could captivate an audience in a punk rock venue. That was his unique gift. He was one of the most talented people I have ever met. And there has never been any performer akin to him.