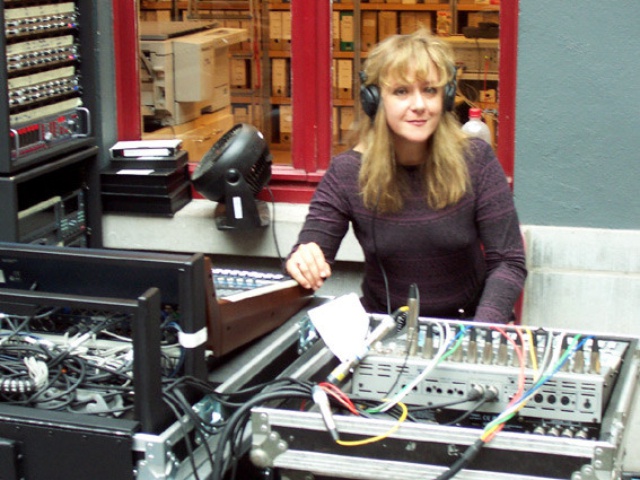 Ana-Maria Avram passed away on the 1st of August 2017. The news became public on Sunday the 5th of August.

Composer, pianist and conductor, was born in Bucharest in 1961. After graduating from the National Conservatory of Music in Bucharest, she obtained a degree from Paris Sorbonne in 1992. In 1994 she was awarded the Grand Prize in Composition from the Romanian Academy.

Since 1988, Ana-Maria Avram has mentained a close collaboration with Iancu Dumitrescu, but she has also continued to forge her own direction in music. She is considered to be one of the most important Romanian composers of her generation.

Her music is affiliated with the spectral music trend. She represents with Iancu Dumitrescu the Hyper-Spectral trend in contemporary avant-garde music. Conductor with Dumitrescu of the Hyperion Ensemble. Her music is spectral, acousmatic, heterophonic and transformational.

Member of Hyperion Ensemble from Bucharest -

group of composers and interpreters representing a new, experimentalist and innovative direction in Romanian music, she realized a lot of European tours, as well as conductor and composer.

Her music incorporates the outward semblences of abstraction of

archetypal sound, achieving its full development in the synthesis of

Her music is affiliated with the spectral music trend. She represents with Iancu Dumitrescu the Hyper-Spectral trend incontemporary avant-garde music. Conductor with Dumitrescu of the Hyperion Ensemble

Her music is spectral, acousmatic, heterophonic and transformational. She composed since now around 130 works, music for soloists, chamber music, music for orchestra,electronic music and computer assisted music

Her main works are : Threnia I-II , Orbit of Eternal Grace  for

Her music is published by Edition Modern, Electrecord, Editura

Her works has been commissioned by prestigious ensembles such as

On the Abolition of the Soul - a Radio France commission was released on a double CD- Radio France, as an anthology of Prix Italia since 1949.

« On the Abolition of the Soul » - a Radio France commission was released on a double CD- Radio France, an anthology of Prix Italia since 1949.

Romanian composer IANCU DUMITRESCU and his associate, ANA-MARIA AVRAM, leading figures in the Eastern European school of modern classical music have issued many stunning works through the years, but this is the first to be issued in America. Los Angeles, sept.1999

« Of the three CD's issued thus far, one also contains three excellent works by a pupil of his: ANA MARIA AVRAM, whose compositional style is every bit as fascinating and innovative, and is certainly a talent to look out for. .. »

ANA-MARIA AVRAM recently composed a quartet for Kronos, and followed it up with "Nouvelle Axe", peformed here by the strings of Romania's Hyperion Ensemble, who also work with DUMITRESCU. It's an uncompromising piece with a tendency to noise throughout, drawing blizzards of pizzicato, high - pitched sounds and lots of glissandos from the panoply of avant garde string effects.

Both Avram and Dumitrescu are convinced that if they have been able to open new doors in music, it is because they have made or found precisely those connections between musical activity and inner life that remain unarticulated in conventional musical training. This is not, however, simply a matter of theit philosophy and motivation as artists. The psychological reality if their music is directly grounded in a conception of the acoustic reality of sound.

“Works also features three compositions by ANA-MARIA AVRAM, born in Bucharest in 1961. Wonderful to hear music where textural innovations aren't employed to colour pre-existing structures, but evolve form in process. On Zodiaque she plays prepared piano opposite Dumitrescu, a percussionist and magnetic tape. Seems like these Romanians are engaged in a similar kind of sonic research to that which resulted in the masterpieces of Giacinto Scelsi and Ennio Morricone : collective endeavour, genuine "deep listenning". The results are similarly overpowering a milion miles from the tootling inconsecuence of most of what passes for New Music in the classical world.” BEN WATSON - The Wire, London May 1995

"Voices of the Desert" for ensemble and computer assisted sounds (2005)

" The Endless Burning Fire" for ensemble and computer sounds (2007)

“Ana-Maria Avram: an adventure in experimental music” an interview with Costin Cazaban, Bananafish, Los Angeles no 15 ( 2001)