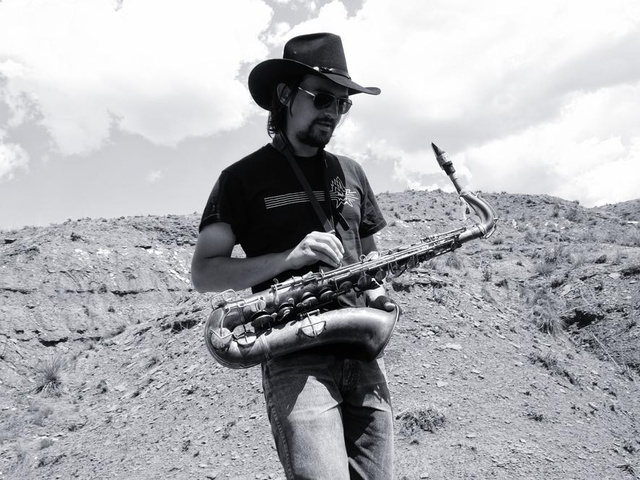 John Dikeman is an American saxophonist currently residing in Amsterdam. Drawing inspiration from a wide range of sources, John’s playing runs the gamut of improvised music and technique. He is currently active as a member of numerous groups including Cactus Truck, a band made up guitarist/bass guitarist Jasper Stadhouders and Onno Govaert; Universal Indians with Norwegian rhythm section Tollef Østvang and Jon Rune Strøm and often featuring Joe McPhee; the trio Dikeman, Parker, Drake with William Parker and Hamid Drake, and numerous other collaborations including projects with Andrew Barker, Dirk Serries, Steve Noble, Luis Vicente, Alexander Hawkins, Roger Turner, Hugo Antunes, Peter Jacquemyn, Peter Ole Jorgensen, Aleksandar škorić. John is one of the newest members of Spinifex, a genre defying ensemble which combines intricate rhythms and advanced compositional techniques. Dikeman also collaborates regularly with producer Jameszoo. John is a tireless performer in the Amsterdam scene which has recently exploded to include a number of new bands that perform compositions with a specific link to various traditions and offer something of a danceable aesthetic, such as the brass band the Zebra Street Band and cumbia project Bacchanalia. Dikeman has performed as a soloist for groups ranging from Godspeed You! Black Emperor and the Metropole Orkest to Mohamed Mounir and the Cairo Symphony Orchestra.

John grew up in Wyoming and started performing professionally at the age of 16. Dikeman left Wyoming in 1999 to study saxophone and composition at the prestigious Interlochen Arts Academy. John later attended Bennington College in Vermont to study with Milford Graves while at the same time studying privately with the late Joe Maneri. After Bennington, John moved to Boston, then New York City and Philadelphia. While on the east coast John performed extensively with many of the top musicians from the USA including Nate Wooley, Mike Pride, Daniel Carter, Tatsuya Nakatani, etc… In 2004 Dikeman moved to Cairo, Egypt where he worked full time as a professional musician and educator, leading numerous ensembles as well as freelancing in a wide range of settings. After Egypt, John moved briefly to Budapest, Hungary, then Paris, France and finally settled in Amsterdam in 2008.

Since moving to Amsterdam, John has been very active in the Dutch improvised music scene as both a performer and curator.