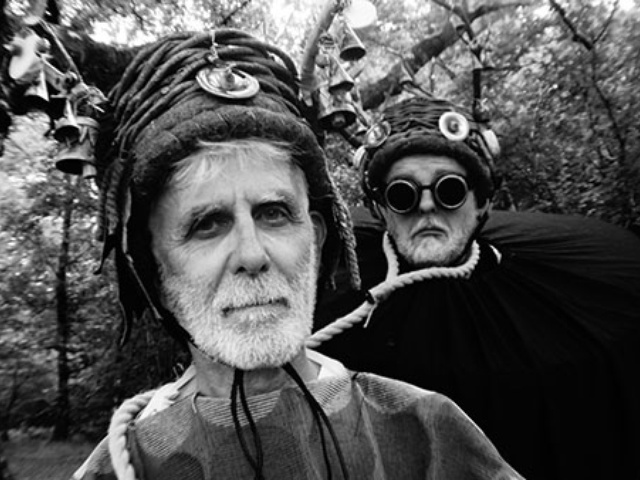 Tonight a special about the 25th anniversary of the in Vienna based Klanggalerie with the first ever full concert of the deepest and very funny underground duo Renaldo and The Loaf.

Tickets now available at € 60,- for the whole weekend. From June 1st you can also have single day tickets at € 30,- per night. Drop us a line at klanggalerie@aon.at and we will send you a PayPal invoice.

Renaldo and The Loaf : Ow! Stew The Red Shoe

Renaldo and The Loaf : Bustle the Burgoo

Renaldo and The Loaf : Hambu Hodo

Tabor Radosti were founded around 20 years ago in the Czech Republic. They released 5 albums so far - the latest one of Klanggalerie, plus we also did re-issues of the first two cassettes. TR's sound is heavy electronic rhythms plus dark ambient soundscapes with an occult theme lying underneath. What makes them unique are their live shows. In fact, we at Klang saw them at a festival in Bohemia and were so excited that we signed them immediately. Tabor Radosti will perform a mix of old and new songs. Be prepared for something very spectacular. If you've never seen them before, you're in for a real treat.

Eric Random is a key figure in The Manchester music scene. He started as part of the Buzzcock's roadcrew, but soon founded his own band The TIller Boys together with Pete Shelley. His music soon changed from postpunk to more electronic when he started collaborating with friends from the Sheffield scene, especially Cabaret Voltaire. Eric travelled much which left a mark on his musical style. He started adding ethnic music elements to his music and played with people like Nusrat Fateh Ali Khan. Later he was head of Nico's band. After a long break Eric Random came back as a purely electronic musician. He released 3 new albums on Klanggalerie which all got rave reviews. In Vienna, he will play his latest tunes and throw in a few classics from his vast catalogue.

Hula were formed in 1981 in sheffield when three of them lived together with the Cabs and They Must Be Russians in a haunted house named Hula Kula. (Hence the band name.) They soon became the city's funkiest group alongside Cabaret Voltaire and played several tours in Europe. The band split up in 1988 but got together again recently and is currently recording a brand new album. Singer Ron Wright released a CD as Kula on Klanggalerie together with Stephen Mallinder. It's a 1981 recording that was long thought lost, but was rediscovered. Both Mal and Ron re-worked the original track and so made an all new version. In Vienna, Ron Wright will play one of his very rare solo shows. Should be a feast for the ears and eyes.

Renaldo & The Loaf relased their first album in 1979 in The Residents' Ralph label, after a previous album and 12" deal with a British label fell through. They soon became everybody's favourite group as they make music that is completely unique. A sort of medieval electronic playfulness has become their trademark. In 1980, the band played a 20 minute set to a very small crowd and later refused to go on a stage agaim because their sound couldn't be reproduced in a live setting. For Klanggalerie's 25th anniversary the band will play their first ever proper show including songs from the new album alongside some classic tunes. Possibly a once in a lifetime chance to ever see this group on a stage!

Robin Storey aka Rapoon was a founder member of Newcastle’s legendary Zoviet France. He was responsible for their amazing packagings and the beautiful designs. After he left the group, Storey started recording as Rapoon. His solo act has released 70 albums up to this day, many recent ones coming out on Klanggalerie. Rapoon combines dark ambient sounds with rhythmic structures, often influenced by ethnic or ritual music. 25 years ago, the first record we ever released on Klang-predecessor Syntactic, was a 7“ by Rapoon. How fantastic that we are still friends and work together. A very special guest for our anniversary party!

Zahgurim was a TOPY-affilated band formed in the mid Eighties by Paul Ackerley and William Vince. They recorded one album, "Moral Rearmament" for Dossier side label Atonal. It was produced and mixed by Paul Ackerley and William Vince with Simon Crab and Julian Gilbert (both of Bourbonese Qualk) at The Old Ambulance Station, Old Kent Road, London on October 24 and 25 1984. For 30 years, the band has not played any gigs. During the production of the Klang CD re-issue of Moral Rearmament, the first new recordings were made and a new album is now in the works. For the Vienna show, Zahgurim will feature Simon Crab of Bourbonese Qualk.

Born in Liverpool, UK, Simon Crab founded the group Bourbonese Qualk in the late 1970s. Crab was often in scuffles with authority be it in or outside school, this theme would be echoed later in life and music, only with more defined theory behind his resistance. By the time the first Bourbonese Qualk album was released, “Laughing Afternoon” (Recloose, 1983), Crab’s brother was no longer a member, but instead was joined with Julian Gilbert (vocals, theatrics) and Steven Tanza (percussion). For the next several years members would come and go with constant always being Crab until the dissolution of the band in 2001. In Vienna, Simon will play as a member of Zahgurim, but he will also play a short solo set presenting his new music. Klang will release his new solo album in spirng 2018.

Arnold de Boer from The Netherlands works and records as a solo act and also as part of The Ex for whom he sings and plays guitar. The Ex were formed in Amsterdam in 1979 and were initially an anarcho-punk band but soon incorporated many different musical styles and became very popular in the experimental and art rock scene. As Zea, Arnold combines electronic breakbeats with witty lyrics and melodic guitar parts. The result is a very playful music that sometimes gets rather edgy and experimental, sometimes rocks and sometimes has a melancholy beauty. Klanggalerie will release a Zea album in January 2018 so we are happy to welcome him with his wonderful one man show for Klang 25.

Non Toxique Lost are one of the most important and equally most underrated bands from Berlin's 1980s Industrial scene. In the old days, most of their albums came out on cassette only, they have later been collected onto vinyls and CDs. After the tragic loss of long-time member Steffen Schütze last year, NTL are continuing with their unique vision of music. Harsh electronic beats meet Sea Wanton's blunt political lyrics that are screamed over the Industrial sounds. Klanggalerie are proud to present NTL as part of our anniversary line-up. A rare chance to see them live and also the first time ever in Vienna!

Thighpaulsandra is a Welsh musician who has played with Spiritualized, Julian Cope and Wire to name but a few. Beside John Balance and Peter Christopherson, he was the only other member in the legendary Coil whose sound he influenced immensely. Thighp is also a fantastic solo performer who has released CDs on a long list of great labels, including Coil's Threshold House. In his solo shows, he combines abstract electronic soundscapes with beats and rhythms plus vocals. The result is very Coil-like in parts, and always great. Klanggalerie are very proud to add him to the line-up for our anniversary which is now complete. And what a line-up it has become. Come and join us.

Another Hula member will play for us at Klang 25: John Avery will be our special guest on Saturday night. John is also a solo performer and composer and sound designer for theatre. He has been a collaborator with theatre group Forced Entertainment for many years and many of his solo projects have fed into music for their performances. John’s work has been described as a collision of melody and noise and is charcaterized by a sense of narrative. The performance at Klang 25 will be his first solo show in Vienna.

Francisco López is internationally recognized figures of the sound art and experimental music scene. For more then forty years he has developed ...