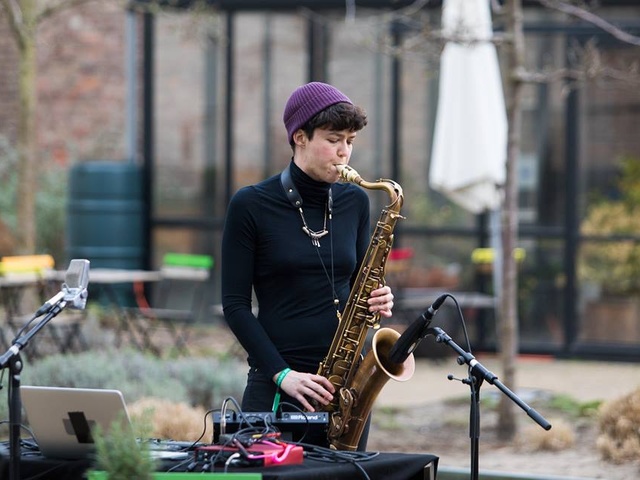 Laura Agnusdei is a saxophone player, electroacoustic composer, and improviser from Bologna (IT). She holds a diploma in classical saxophone from the Conservatory of Bologna and a master degree with distinction in electro-acoustic music from the Institute of Sonology (NL), where she is currently research associate. In her youth, she was part of many experimental and underground rock bands in her hometown.

Since 2014 she started her first solo project, based on the use of different sound sources by combining digital, analog and acoustic sonorities in a hybrid set up. The first compositional outcome of her solo project is “NIGHT/LIGHTS” a 4 track-ep released in September 2017 on limited edition cassette via the English label The Tapeworm. This work features the saxophone as the main voice within different sonic landscapes that shift between melody and texture, between song form and improvisation, to create emotional states that change from track to track. Likewise, in the context of her research at The Institute of Sonology she has been composing fixed media works and pieces for live performances that involve acoustic instruments and electronics, focusing on possible timbre relationships between these two domains.
Her debut album “Laurisilva” was released on 29 November 2019 on The Wormhole. The vinyl’s six tracks invite the listener to explore an imaginary landscape made from sounds growing and layering like biological organisms within a forest. “Laurisilva” is a hybrid habitat, where the acoustic dimension of wind instruments – explored both in their melodic and timbral possibilities – meshes with polymorphic electronic sounds.
Since 2016, Laura’s music is been presented in festivals and venues such Rewire (NL), Dekmantel (NL), Cafè Oto (UK), Macao (IT), Node (IT). Furthermore, Laura is actually performing in a duo with Italian producer Daniele Fabris and in many free-improv ensembles. She is also active as a composer for cinema works, performing scores for silent movies and composing soundtracks for short films.
Since 2015 Agnusdei is also playing sax in the Italian psych-rock collective Julie’s Haircut. She released two albums with them, “Invocation and ritual dance of my demon twin” and “In the Silence Electric”, both edited by Rocket Recordings (UK).
Laura also holds a bachelor of Modern Literature from Alma Mater Studiorum University of Bologna. She graduated with distinction presenting the thesis “Identity crisis through body representation in contemporary American cinema and literature”.

Sex With Giallone : Long Tall Sally (We had a room at Tropicana Motel - Trovarobato - 2015)