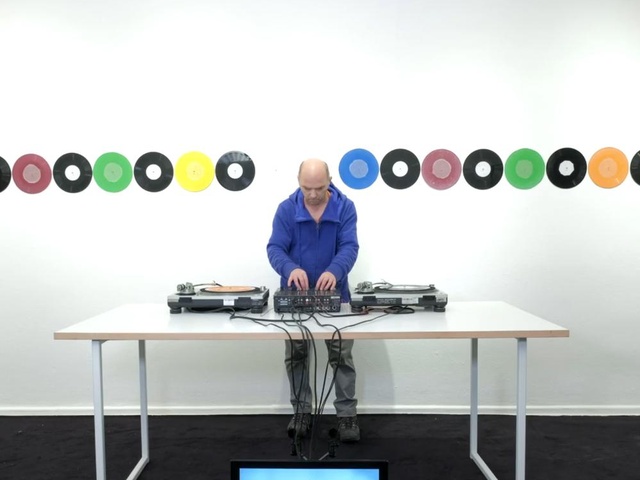 Turntable player, improviser, sound designer, and visual artist Martin Tétreault first started to play improvised music with the likes of Michel F Côté, René Lussier, Diane Labrosse and Jean Derome. His work with both standard and custom-made turntables has been widely recognized both here in Canada and abroad. He performs both alone or with other musicians, dancers/choreographers, poets and installation artists.

Between 1994 and 2004 he has played at various international music festivals and started to perform and record with Otomo Yoshihide, Xavier Charles and many other musicians. In 2004 choreographer Lynda Gaudreau commissioned Tétreault a piece for turntable quartet. Martin regularly works with Cas Public and Sylvain Émard Danse. His solo exhibitions include R_ _GO, Prises de son: couleurs et animées and Phonographes vinylisés. In 2015 Nicole Gingras authored a monograph devoted to his work, Des disques et un couteau.

Graphic Varispeed, a work in progress, is a collaboration between Martin Tétreault, a Montreal artist and turntablist, and Dieter Kovačič, alias dieb13, a Vienna-based artist and turntablist who cuts his own vinyl discs. The project began in March 2014 when Tétreault and Kovačič were on tour together in Europe. Dieter gave Martin a record that he had cut himself. Martin made a cast of the vinyl disc using wood glue, following a technique that he had developed. The next day, once it had dried, he gave it to Dieter. When he got back to Vienna, Dieter made a copy of the glue cast, and mailed the resulting vinyl disc to Martin. Martin then made another cast. . . and so on. The two artists have been exchanging vinyl discs and glue casts by mail ever since. As of September 1st, 2019, 13 iterations exist. The pair have yet to set a limit on how many will be made, nor on how long the exchange by mail will last. Perhaps they never will.

The work is now accompanied by four videos, allowing the visitor to see and hear four performances.