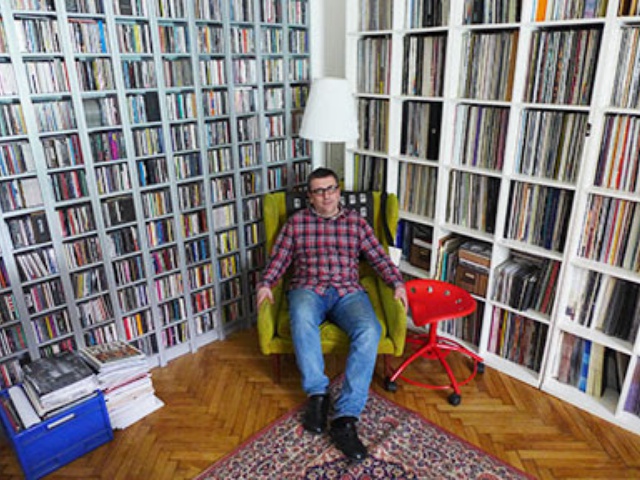 While Peter Rehberg’s output as Pita might be his best known work, the man is a tirelessly prolific artist with countless releases under various monikers and with many collaborators. As an early member of the peerless Mego label in the mid 1990s, Rehberg’s music became synonymous with innovative abstract electronica, digital noise, and live computer music. His vast catalog spans genres as diverse as techno and doom metal, and he has collaborated with underground noise musicians to choreographers. The thread that ties Rehberg’s work together is a keen ear for inventive texture and unique structure.

Peter Rehberg was born on June 29, 1968 in London. He joined a loose collective of experimental musicians in Vienna including Ramon Bauer, Andreas Pieper, and Peter Meininger that would congeal around the Mego label in the early 90s. Mego has become a now legendary label with artists that defined the live computer music, glitch, and abstract techno genres with their brand of loose, often improvised digital noise and ambience. Artists like Christian Fennesz, Farmers Manual, General Magic, Florian Hecker, Russell Haswell, Merzbow, Jim O’Rourke, and Kevin Drumm released vital, progressive electronic music on Mego during the 90s, making the label the go to spot for fans of all things experimental.

Throughout the 90s Rehberg collaborated with Bauer as Rehberg & Bauer, releasing a trilogy of records for the Touch label; Faßt (1996), Ballt (1999), and 2001’s excellent Passt. All three records explore a territory somewhere between post-techno ambience and full-on noise assault.

In 1999 the second Pita full-length was released. Get Out is arguably the best Pita album and a good place to start with Rehberg’s music. Again the music mines a sort of punk rock digital ambience, complete with massive bursts of grainy textural noise, crackling static, submerged melodies, and glitchy loops. At times beautiful, at times intensely caustic, these nine tracks ripple with ideas and energy. Get Out is perhaps the quintessential Mego release.

1999 also marked the first Fenn O’Berg release. The trio of Rehberg, Fennesz, and O’Rourke have continued to work together throughout the 00s, releasing three records of improvised computer music; The Magic Sound of Fenn O’Berg (1999), The Return of Fenn O’Berg (2002), and 2010’s In Stereo. The music reflects the various styles of all three members, and highlights a skewed sense of humor not often found in their solo work.

Two collaborative projects of note include Rehberg’s involvement in MIMEO, an orchestra of improvised electroacoustic music that includes a who’s who of experimental music such as Keith Rowe, Fennesz, Kaffe Matthews, Rafael Toral, Phil Durrant, Jerome Noetinger, and many others. Also, in 2006 Rehberg joined forces with SUNN0))) founder and doom metal pioneer Stephen O’Malley as KTL. The duo continues to record and tour today, releasing a steady stream of crucial dark ambient and avant-metal records.

Rehberg continued to release solo records as Pita into the 00s, with Get Down (2002), Get Off (2004), and the Mesmer (2010) cassette being the most notable. Rehberg also released his work with French avant-garde dance collective DACM under that name. Showroom Dummies (2002) and Stereotypie (2004) capture Rehberg’s metallic drones and chopped rhythms used as music for the dance troupe’s performances. Other notable releases from this decade include two albums released under his given name, Fremdkoerper (2005) and 2008’s excellent Work for GV: 2004-2008.