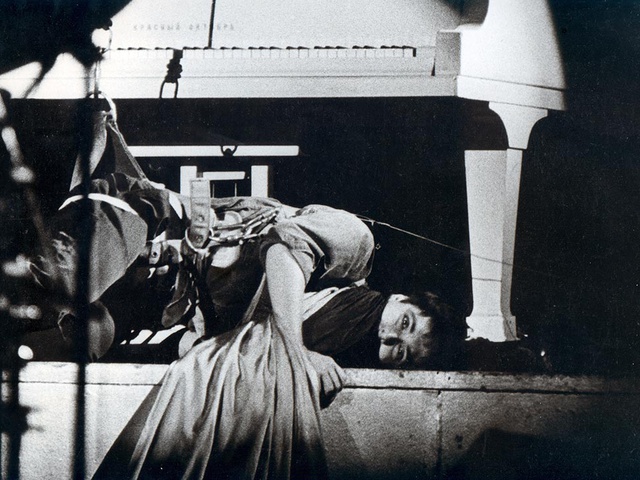 Tonight, in memory of Sergey Kuryokhin, who passed 20 years ago away. I'm still impressed of his music!

Sergey Kuryokhin & Boris Grebenshchnikov : untitled side a (Mad Nightingales In The Russian Forest)

Sergei Kuryokhin was a visionary Russian entertainer, actor, composer, pianist, conductor, producer and director of several ground-braking cross-genre and cross-cultural projects in the Soviet Union and Russia. He stated that only insecure people may restrict their development by limiting their minds to one set of ideas, be it a political party, a religion, an art form or a lifestyle.

During the late 1970s and early 1980s he played piano with the jazz quartet of Anatoliy Vapirov at several jazz festivals. In 1981, after Vapirov's arrest and imprisonment, Vapirov and Kuryokhin secretly made a sound recording of the music Vapirov composed in prison, and then it was smuggled from the Soviet Union, and was released in England under the title "Sentenced to Silence" (1983). That album also became a showcase of remarkable interplay between the imprisoned Anatoliy Vapirov, on the saxophone and a free man, Sergei Kuryokhin on the piano. At that time Kuryokhin demonstrated highly unusual fluency on the piano and was noted by such musicians as Chick Corea and Gary Burton. In 1981 Kuryokhin joined the popular Leningrad underground band "Akvarium" and collaborated as keyboardist, composer and the bands co-leader along with Boris Grebenshchikov, releasing several albums together during the 1980s.

In 1984 Kuryokhin launched his best known project: " Orkestr Pop-Mekhanika" (Popular Mechanics Orchestra). The show was staged at major arenas and concert halls in St. Petersburg, Moscow, and Novosibirsk among other cities in Russia and abroad. The ever-changing project included musicians, bands and actors from Leningrad and Moscow, as well as from Europe, such as Vanessa Redgrave, "Akvarium" and Boris Grebenshchikov, "Kino" and Viktor Tsoy, "Igry", "Auktsion", Dzhungli", "Tri-O", Sergei Bugayev, even a Red Army Ensemble and many others. During "perestroika" under Mikhail Gorbachev, Kuryokhin was harshly attacked by the Communist Party ideologist Ligachev who called the Popular Mechanics show an "ideological and artistic jumble!"

Kuryokhin's productions and group performances amalgamated music, theater, circus, ballet, cinema, erotic dances, live animals and birds, movable decorations, paintings and other visual arts in what could be described as Noah's Ark with Zappa and Warhol, all together in a Soviet-type underground happening show loaded with pranks and witty allusions. Kuryokhin called himself a "sound-manipulator" instead of a traditional music director, because he was improvising with moves of up to 460 people and animals on stage as if people were part of a giant live music notation. Some critics called his show a "total art" others called it a nonconformist parody of "proper" and "official" ceremonial shows. His ever-changing project was embracing performances by various musicians and actors, such as Vanessa Redgrave, Timur Novikov, Anatoliy Vapirov, Viktor Tarasov,Vladimir Chekasin Nikolai Gusev, Alexander Lyapin, Kino, Alisa, Valentina Ponomaryova,Vladimir Volkov, Kenny Millions, and many others. His notable live and studio recordings include over 30 albums such as "Introduction in Pop Mekhanika" (1987), "Popular Zoological Elements" (1987), "Popular Science" (1989), four albums with "Akvarium", "Spectre of Communism" (1992), "Iblivy Opossum" and his last studio recordings withVladimir Volkov and saxophonist Keshavan Maslak (1996).

Kuryokhin wrote music scores for several Russian and international films. He also enjoyed a film acting career. His music career was highlighted by his solo keyboard performances at the Bach International Music Festival in England and his concert tours in the USA, France, West Germany, Scandinavia, and Japan. He took part in the international project "Wrap around the World", which was produced by Nam June Paik at the 1988 Olympic Games in Seoul, Korea. From 1991 to his untimely death in 1996 Kuryokhin was a member of the Committee for Culture and Tourism of St. Petersburg City. During that time Kuryokhin became one of the driving forces behind the successful effort in making St. Petersburg the cultural capital of Russia. His live performances attracted diverse public with a broader range of tastes and interests. Kuryokhin invented an impressive show-stopping move for the culmination of his live performances; after a virtuoso passage across the piano keyboard his hands would fly beyond the limits of the piano, then his whole body followed the flight and he would fall on the stage in front of the audience as if he was dead.

Sergei Kuryokhin was the author of many creative initiatives in Russian music, film, television, and show-business. Kuryokhin also made news after a popular TV-show where he presented a media-virus that the founder of the Soviet Communist Party V.I. Leninwas actually not a human, but a mushroom. He launched a series of cross-genre and cross-cultural concerts during the 1980's- 1990's in St. Petersburg. His innovative approach influenced many actors, directors, and musicians. His influence can be found in contemporary music and film. His ideas live at the annual Sergei Kurekhin International Festival (Skif), which is organized by the Sergei Kurekhin Charity Fund in St. Petersburg, Russia, since 1996. The Skif attracts over 100 international actors, musicians, and cross-genre performers and has been attended by tens of thousands annually.

In the mid-1990s Sergei Kuryokhin suffered from an emotion breakdown and depression, after he was diagnosed with a rare heart condition, cardiac sarcoma, which was incurable at that time and eventually caused a sudden heart arrest. At that time he was showing signs of a personality disorder, he became obsessed with ideas of chaos, totalitarianism and various mystical schools. Then he split-up with many old friends. His talent was drifting in a darker direction. Kuryokhin's imitation of his own death during his live performances was a premonition of his own death. He died at age 42, on July 9, 1996, in St. Petersburg, Russia. His burial service ceremony in St. Petersburg began at the "Spaso-Konyushennaya" Church, the same Church, where the burial service was held for great poet Alexander Pushkin. Sergei Kuryokhin was laid to rest in the Komarovo Cemetery near the tomb of Anna Akhmatova and other Russian culture luminaries.

Here you can find a video of Pop-Mechanics from 1988!