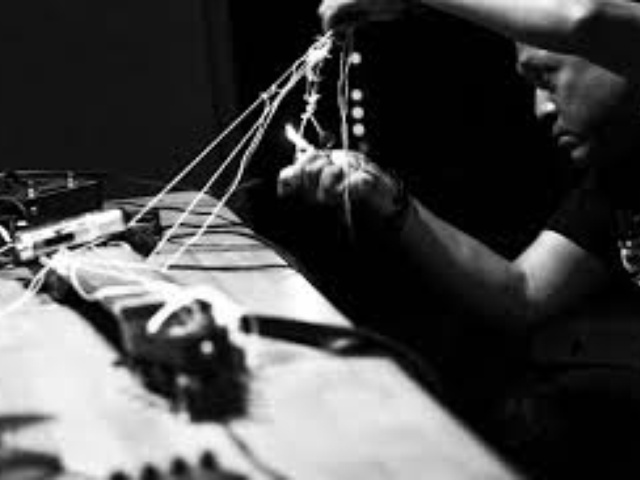 Sin:Ned aka Dennis WONG / WONG Chung Fai, is an improviser, experimentalist and noise addict from Hong Kong.
He regards himself as a medium and his works, only manifestation of our hidden sonic aspects. His practice on noise and sound signifies an implicit form of mysticism in search of direct and pure physical experience through chaos, errors and the extremes. He is the co-founder of Re-Records (www.re-records.com), Twenty Alpha, and the Hong Kong organizer of JOLT Festival (http://joltarts.org/home).
In addition to being founding member of experimental outfits No One Pulse, After Doom, adeo and underture, he is also the ritualist behind home brew events such as Kill The Silence Festival, Keep The Silence Festival, Subliminal Lounge, ACO Sound-on-Site, and live performance series NOISE to SIGNAL. His works have been featured in the infamous Belgium imprint Sub Rosa’s “An Anthology of Chinese Electronic Music” and “An Anthology of Noise & Electronic Music Vol. 7”.

e:ch is an experimental guitar/ electronics based project from Macao. The music revolves around drone, guitar noise & contemporary classical among the 3 albums released to date since 2013. The forthcoming album “Incisions” is set to release in September 2015, a psychedelic drone composition revolves around ambient, guitar noise, improvised trumpet and spoken words. Sculpting the elements into dark texture and soundscape with guitar, electronics, trumpet, voice and extensive use of effect pedals.

A European and Asian tour for the album “Incisions” is set to combine live visual performance by Taiwanese Visual Artist – JinniL, touring from early October onwards.

. . . is the moniker for Nikola Mounoud's solo project. Live sound artist who has little interest in physical releases, he's working on the feedback process of both analog and digital devices using the many possibilities available to perform intense and highly dynamical live performances using the full audio spectrum. The end of each live can be an occasion for a surprising "grand final" in tribute to comedy, cinema or...

Beside being a sound producer in solo or as the duo Overload Collapse, since 2004 he's a member of the LUFF - Lausanne Underground Film&Music Festival as technical staff and music co-programer. He co-founded the photo&cinema laboratory "on fait du l'art !" in 2009 and more recently held the global coordination of LUFF does Tokyo event in 2012.

...sound artist, musician, noisician, performer, composer, improviser or whatever you like to call it (depends largely on your taste). . . . aka Nikola Mounoud (me ! obviously…).

Riding many musical waves as we all do, I focus my solo workon the exploration of both analog and digital feedback(s) as sound source with the use of modular software and an analog mixer. I created for myself a proper instrument that allows me to work (usually) as precisely as I need and want, of course well hewn from the coal face of improvisation !
Unlike chords, wind and skins of acoustic sound, feedback is an unstoppable implacable sonic evolution (as long as electricity is there to feed it !). My work is meant to be played and heard live as well as to be shared freely over the internet.
I am also the half of the unclassifiable Overload Collapse with Nicolas J. Fasnacht and used to be a member of the trio The MERJ exprience (2004-2007) with UrbanAddictive and VERJ=.
I am a volunteer for the LUFF - Lausanne Underground Film&Music Festival -, being part of the organisation crew as music co-programmer, sound technician and other little things since 2004. I also held the coordination of the LUFF does Tokyo for the 10th anniversary extra-edition of the festival in 2012.
2004 was the blessed year when we started [net]label merj.ch that became the social USB/cloud [net]label project MEOVCO.com since 2014 !
In 2009 we co-founded the associative film photography & cinema laboratory On fait du l'art ! and I am the co-creator, scenarist, editor and producer of the Cinéma (re)trouvé and Karaoke Porno projects in Lausanne, Switzerland with Kusty aka Aloïs Wismer. For a few years we shared this common interest and then decided to start a live collaboration under the title Avery Tinnitus around the very simple idea of de/con\struction of the senses..
On this website you can find a selection of recorded sounds/videos that are hopefully enough to give you a small taste of the work and, who knows, there might be a chance I once play somewhere near your neighbourhood ! In case you are looking for more wordy descriptions and concepts it may be easier to turn your interest to writers instead of a sound artist, musician, noi...


Kazehito Seki
is a Voiz (Non-FX Voice Noise) performer who seeks for the sharpest sound by running about between Noise (Abstract / Nerves) and Hardcore (Concrete / Muscle) with no electronic FX but just a couple of amplified microphones. Kazehito belongs to a particular scene in Japan, influenced by hardcore music, subculture, and what a western would see as Tokyo's sonic ghetto culture. Kazehito's approach to the voice as an instrument demonstrates his flexibility, oscillating between subtle sinewaves and brutal white noise in a microsecond, like so:
https://youtu.be/ZaGf9qQTX2o?t=9m44s / Youtube

For more than a decade, Kazehito has been blasting his voice in a hardcore band. After several years of fusing his voice with electronic noises, in 2012 started his solo activity without electronics, besides joining in a Voiz group called “Toyko Voiz Choir” organaised by William Tokuhisa. At the same time, toured in Korea with his two bands: “Omawarisan” and “Ameri B.C”. Nowadays, besides his solo and many bands, he collaborates with various kinds of artists including musicians and dancers. He also teaches training and keeping the voice safe, because after all -- the voice is and was (always) the primordial instrument.