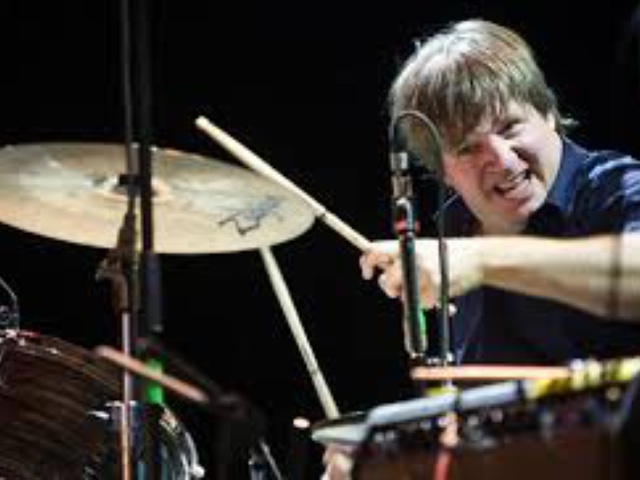 Tonight we have a talk with Steve Shelley, he was the drummer of Sonic Youth and is still playing with al the members of SY. The list of all the musicians with who he has played together is very long .....

Chris Lee : (I Love The Way You) Bring Me Down

Shelley was born in Midland, Michigan, played in several mid-Michigan bands, including Faith and Morals and Strange Fruit, and was among the original lineup of the punk band The Crucifucks. Since 1985, he has performed with the noise rock band Sonic Youth, when he replaced Bob Bert.

After leaving the Crucifucks, he moved to Manhattan, subletting the apartment of Sonic Youth's Thurston Moore and Kim Gordon while the band was in Europe. When the band returned, they hired him as their drummer without an audition.

In 1992 he founded the independent record label Smells Like Records, based in Hoboken, New Jersey, where he also resides. Along with friend and Two Dollar Guitar musician Tim Foljahn, he helped advance Cat Power's musical career, serving as drummer on her first three albums. He also produced Blonde Redhead's debut self-titled album in 1993 and Cat Power's What Would the Community Think? in 1996. Steve was able to track down Lee Hazlewood in 1997 and secure permission to reissue five of the finest titles of the Hazlewood back catalog. Smells Like Records also released a collection of standards recorded in 1997, which was the first new recording from Hazlewood released domestically in nearly two decades. In 1998 Shelley played on the soundtrack of the film Velvet Goldmine as a member of Wylde Ratttz, along with The Stooges' Ron Asheton, Thurston Moore, Mike Watt, Don Fleming, Mark Arm of Mudhoney and Jim Dunbar.

In February 2009, Shelley spent a weekend in Chicago recording with Chris Connelly, Sanford Parker, and Jeremy Lemos. The results of this collaboration were released under the moniker The High Confessions by Relapse Records on July 20, 2010.

In 2010, Michael Rother played shows in Europe with Shelley and Tall Firs guitarist Aaron Mullan as Halogallo 2010. This group performs music "in the spirit of" NEU! including some tracks by Harmonia and from Michael Rother's solo albums. Other 2010 concert dates included the ATP New York 2010 music festival in Monticello, New York and Incubate 2010 in Tilburg, Netherlands.

Shelley is also in charge of operating Sonic Youth's own record labels, SYR and Goofin'. In 2010, he started a new label called Vampire Blues whose inaugural release was a 7" by Hallogallo 2010.

In 2011 he joined Disappears. In 2012, he left the band due to scheduling conflicts.

This section possibly contains original research. Please improve it by verifying the claims made and adding inline citations. Statements consisting only of original research should be removed. (May 2011)

Steve Shelley is a "drummer's drummer" with a playing style that is precise and powerful without being overpowering. Hallmarks of his style include heavy use of toms, the innovative use of maracas, excellent dynamic control, and the ability to play in service of the song above displaying "chops". He anchors the music of Sonic Youth by composing drum parts that are generally as unchanging as the chord structures and melody lines of the songs, therefore providing an ideal foundation for their unique brand of organized chaos. He has also proven himself to be an astute improviser, performing admirably in that role when the need arises (as evidenced mainly on the SYR series).

Other drummers who have influenced him include but are not limited to: Pete de Freitas, Stephen Morris, Phill Calvert, Kenny Buttrey, Keith Moon, and Ringo Starr.