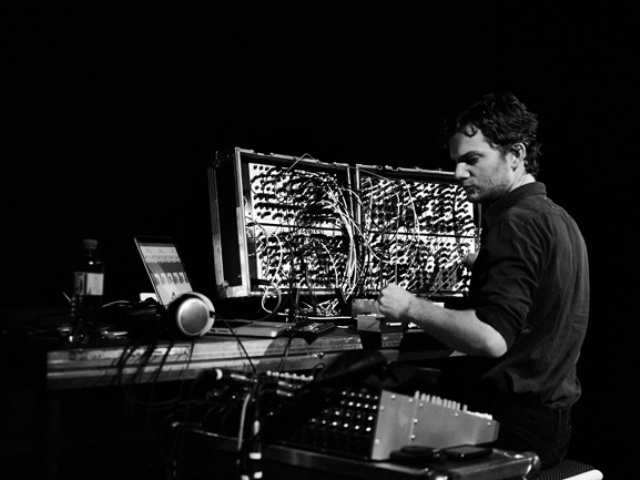 Thomas Ankersmit (1979, Leiden, Netherlands) is a musician and installation artist based in Berlin and Amsterdam.

Acoustic phenomena such as sound reflections, infrasonic vibration, otoacoustic emissions, and highly directional projections of sound have been an important part of his work since the early 2000's. His music is also characterized by a deliberate misuse of the equipment, using feedback and disruptions to the signal, and the extremes of frequency and dynamics, to create visceral but finely detailed swarms of sound.

Since 2006 his main instrument, both live and in the studio, has been the Serge analogue modular synthesizer.

Ankersmit collaborated with Sicilian composer/performer Valerio Tricoli on Forma II, a series of electroacoustic pieces released on the PAN label, and on music based on the acoustics of abandoned radar domes. Both projects were honoured by Ars Electronica. Other recent collaborations include recording sessions with Kevin Drumm at GRM in Paris, and a new Phill Niblock composition for Serge modular synthesizer (Niblock’s first piece for an electronic instrument).

Ankersmit’s music is released on the Touch, Ash International and PAN labels.
His sound and installation work have been presented at Berghain, Hamburger Bahnhof, and KW Institute for Contemporary Art, Berlin; Paradiso, Muziekgebouw, and Stedelijk Museum, Amsterdam; Kunsthalle, Basel; Henie Onstad Art Centre, Oslo; Arnolfini, Bristol; CCA, Glasgow; Serralves Museum, Porto; MoMA PS1, New York; REDCAT, Los Angeles, and at festivals for experimental and contemporary music all over the world.
He has been a guest lecturer at universities such as CalArts, Stanford, The Art Institute of Chicago, Harvard, and the Universität der Künste in Berlin.

"Thomas Ankersmit's solo concert at Berghain for the MaerzMusik festival immersed the audience in equal parts terrifying and hallucinatory full-body sound. Using the venue's superb quadraphonic sound system to its full capacity and commanding seemingly infinite dynamics from his Serge synthesizer and computer, the music varied from carefully controlled blizzards of electronic drone-noise to finely tuned high-frequency flickers that seemed to transform whenever I just slightly moved my head to infra-bass waves so deep and powerful that they shook up resonances throughout the building and actually blurred my vision. A stunning, fantastic performance."
→ Christian Asmussen, Punktum

"Sound has never felt so granular and tangible and all around you. A hair-raising and overwhelming experience."
→ Antoine Richard, Tokafi

"A fantastic performance by Thomas Ankersmit in Berlin’s MaerzMusik festival at the infamous Berghain club. It was fascinating to see Ankersmit play the analog Serge synthesizer like a genuine musical instrument: sensing its possibilities and restrictions, trying to force it into shape, resisting and shaping its unpredictability. The sonic landscapes he created were incredibly rich and subtle: softly crackling and roaringly loud, very high and very low pitched, dense and deafening and wide, almost silent. A genuine feedback loop between the machine and the performer and back, and a fascinating sight and sound."
→ Melle Kromhout, Noise Identities

"Ankersmit constructs a musical world that feels alive and capable of going anywhere, and yet also manages to give the music a strong sense of structured purpose, a degree of compositional control unusual in this area of live performance. It is the fine balance between the sense of chaos that threatens to pull everything apart and the controlled formation of the music into clearly defined sections of differing intensities that raises the work above that of so many of Ankersmit’s contemporaries."
→ Richard Pinnell, The Wire