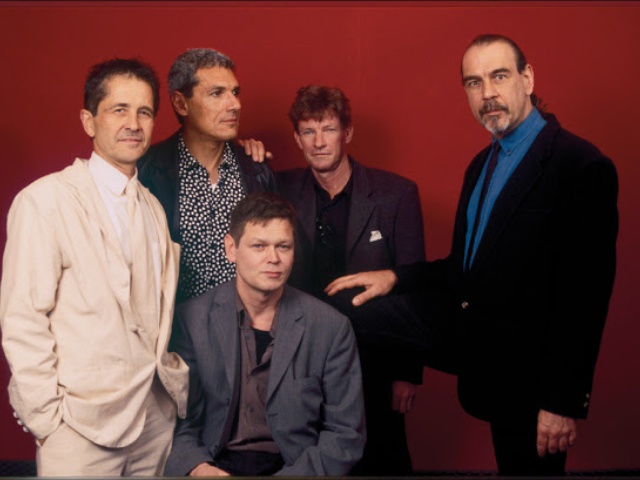 This week we will have a Tuxedomoon special (2h45) with interviews with Blaine L.Reiniger, Peter Principle, Luc van Lieshout and Bruce Geduldig and recordings from the live show done  in Het Depot, Leuven, Belgium on the 21/9/2014

Blaine L.Reiniger is talking about how he get involed into music, the starting of Tuxedomoon, the name, there first recording, Ralph Records & The Residents, the move to Rotterdam and Brussels and his move to Greece, corporation with Dj Hell, Mark Hollander, there last record Pink Narcissus, internet, the pilosophy of Tuxedomoon, new technology,.....

Peter Principle is talking about his name, as drummer, as guitarist, how he came involved with Tuxedomoon, The Doctors, Ralph Records, what Tuxedomoon means for him, the new album, the future, Blue Velvet & David Lynch, the way they make Tuxedomoon music, ...

Bruce Geduldig, who is he, his name, his way how he get involed into music & art, his evolution of not, new technology, his interaction with the other Tuxedomoon members, Microdot, The Weatherman, as a musician, his move to California, the future, touring, how he came into Tuxedomoon,....

Luc van Lieshout spokenword project, Tuxedomoon together for touring, jamming together, analoge recording, the way a song is created, Microdot, how he came into Tuxedomoon, how he sees Tuxedomoon, ......

Formed in 1977 by multi-instrumentalists Blaine L. Reininger and Steven Brown, then two students of electronic music at San Francisco City College, with technical assistance from video artist Tommy Tadlock, Tuxedomoon started playing salons and accompanying performances by The Angels of Light. Brown's connections to local theatre gave the band access to vocalists Gregory Cruikshank, Victoria Lowe, and, most frequently, Winston Tong. The band gained some level of recognition in 1978 when they opened for Devo. Michael Belfer, (guitarist), and Paul Zahl, (drummer) joined the band in time to help with the group's first EP, No Tears. Lowe left prior to the album's release in 1978. Soon afterward, Tong and Belfer left the group temporarily, and bassist Peter Principle joined the lineup. In 1979, the group signed to The Residents' Ralph Records, with whom they recorded their next two albums, Half Mute in 1980 and Desire in 1981, after which the band relocated to Rotterdam for a short time and moved on to Brussels, believing their sound better fit the electronic scene in Europe.

In Brussels, the band soon created the score for a ballet by Maurice Bejart,  released in 1982 as "Divine". In 1983 Reininger left the group in order to pursue a solo career, and trumpeter Luc Van Lieshout joined. In 1985 Tuxedomoon had its largest success commercially with the international release of Holy Wars. Tong left the group again soon after its release. Multi-instrumentalist Ivan Georgiev was brought in to perform on the group's next two albums, 1986's Ship of Fools and 1987's You. The band remained inactive through most of the 1990s, although never technically broke up. On July 20, 2004 a reborn Tuxedomoon, consisting of Steven Brown, Blaine Reininger, Peter Principle, and Luc Van Lieshout released a new studio album, Cabin in the Sky. They continue to work and tour together and have since released Bardo Hotel Soundtrack in 2006, with upcoming projects coinciding with the group's 30th year anniversary, the Vapour Trails album and the boxed set 7707.