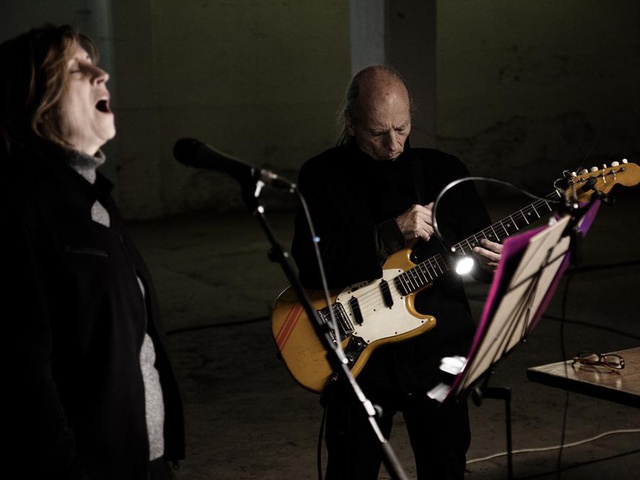 Vito Ricci grown up in Brooklyn and Lise Vachon in Montreal. Now both living in Queens, New York.

Playlist at the end of the page.

Vito Ricci's leading edge instinct and creativity have made him a vital and prolific composer of illuminating and compelling works. Infused with poignancy and honesty, his music has the power to linger in the listener's memory. An artist who has been called " composer of wide ranging and obsessively fascinating collection of works" by the Wire, and his soundtracks compared to "heirloom seeds put back in circulation" byPitchfork and "elegant and snappy" by the New York Times. Vito Ricci has been on the leading edge of the downtown music scene since 1979.

Mr. Ricci has been the recipient of grants from ASCAP, Meet The Composer, The National Endowment For The Arts and Queens Council on the Arts. Mostly self-taught, he has studied briefly with Ursula Mamlok, Eleanor Cory and Ornette Coleman, and has released CDs of solo piano music, electronic works, song cycles, improvisations and string quartets.

Recent recordings are "My Little Life", a book/cassette published by séance-centre in 2017, "Symphony for Amiga ", a vinyl commissioned by Intelligent Instruments in 2016, a double vinyl, "I was Crossing a Bridge", a collection of his works by Music from Memory in 2015, the recording of a CD of his string quartets "I Don't Know Who I Am" by the Flux Quartet in 2009, and producing, composing and playing on Lise Vachon's CD "Vocalise" in 2006 with stellar musicians, Rashied Ali, Peter Zummo, Byard Lancaster and Blue Gene Tyranny.

"Lise Vachon vocalizes freely over constantly shifting backgrounds from a band stacked with idiosyncratic sounds. The results are quite fetching." Time Out, New York.

After music school, Lise signed with Capitol and Polygram and recorded as a duet: Luc and Lise Cousineau "Les Alexandrins". They had several number one songs on the chart, toured throughout Canada, Brazil and French countries.

Developing a strong interest in world music, Lise traveled to Senegal and Mali and brought back a few traditional songs. Her "Yama Nekh" became a #1 song for the highly successful Ville Emard Blues Band for which she sang lead. The Quebec Cultural Affairs gave her a grant to develop and organize her project of musical exchange between West African and Canadian musicians, performers and composers. During this time Lise formed chamber jazz group Toubabou, the group closed the Superfrancofête in Quebec City before 55,000 people. She went on with the writing and recording of "Moi, Lise Cousineau".

In New Orleans she spent time studying and singing contemporary music by Dinos Constantinides, Sanford Hinderlie, John Bauer, Stephen Dankner. In New York, Lise performed at La Mama, at the Knitting Factory, Roulette, Bowery Poetry Club and the Cornelia Street Café. In Philadelphia she sang at the Sedgwick Theater and at the Fringe Festival.

Recent accomplishments include a performance televised throughout the country headlining the Quebec City Festival with the Ville Emard Blues Band "... a Lise Cousineau with a spectacular voice"(Le Soleil). She recently recorded Vocalise produced by Vito Ricci in New York City with Rashied Ali on percussion, Peter Zummo on trombone, Byard Lancaster on reeds, Blue Gene Tyranny on piano and Vito Ricci on guitar and some compositions. "Every track on this disk celebrates an array of distinct ethno- sounds" (Jazz review.com)

Her most recent recordings: Dox-E-Koo for solo voice and delay on Vito Ricci's Music from Memory double vinyl "I was Crossing the Bridge" 2014, Pitchfork says: " Dox E Koo stakes out a position somewhere between Meredith Monk and the haunting tones of Le Mystère des Voix Bulgares."

Of her singing on Vito Ricci's Symphony for Amiga launched in 2017. "Vocalist, Lise Vachon, lends her Meredith Monk-like breaths, chants and chirps, giving these dreamlike sketches an added strange dimension."

Vito Ricci : Out Of The Bleu