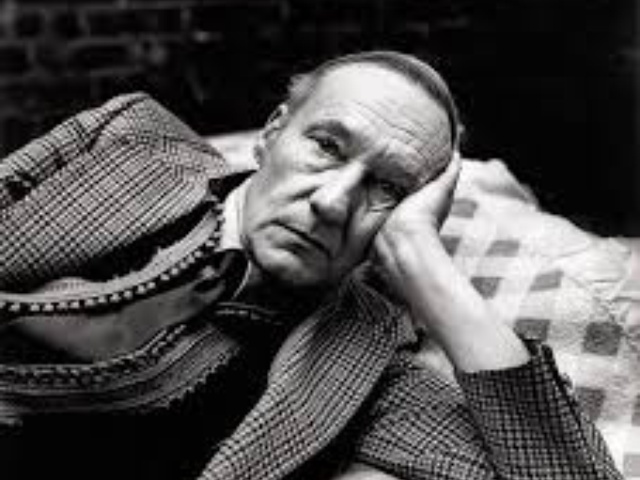 William S. Burroughs was born on February 5, 1914, in St. Louis, Missouri, and became one of the founding figures of the Beat Movement. An addict for years, he crafted books like Junkyand Naked Lunch, which were harrowing, often grotesque looks at drug culture. He is cited as a major influence on countercultural figures in the world of music as well and worked on several recording projects. Burroughs died in Kansas in 1997.

Born on February 5, 1914 in St. Louis, Missouri, William SewardBurroughs was born to Laura Lee and Mortimer Burroughs. William was named after his famous grandfather, an inventor who was a pioneer in adding-machine technology.

The younger Burroughs attended prep schools and later studied English literature at Harvard University, where he graduated in 1936. He travelled to Europe and met and married Ilse Klapper for the purpose of allowing her entry into the U.S. The two ended the union upon their entry into the states.

Trying different career paths to no avail, Burroughs eventually traveled to New York and met writers Allen Ginsberg and Jack Kerouac in the mid-1940s. The three would be heralded as starting the Beat Movement, an artistic outpouring of nontraditional, free expression.

During the mid-1940s, Burroughs and Kerouac collaborated on a novel about the murder of a friend—And the Hippos Were Boiled in Their Tanks—that was published decades later posthumously. Burroughs developed a relationship with Joan Vollmer during this time as well and they would live together as husband and wife starting in 1945. Burroughs was also open about his attraction to men, with he and Ginsberg having been lovers.

Burroughs had started to use opiates and descended into heroin addiction. He was also a gun enthusiast and, while living with his family in Mexico City in 1951, played a drunken game of target practice with Vollmer and accidentally shot her to death. He did not receive major prison time, yet would struggle with demons for years to come as a result of the killing.

Burroughs published his first novel, Junky, in 1953 under the name William Lee. The work featured an unflinching, semi-autobiographical look at drug, or "junk," culture. He continued to travel and eventually ended up in Tangiers, strung out and running out of financial resources. He realized he would perish if he didn’t change his path and so traveled to London to receive apomorphine treatments, which he credits as curing his addiction.

With the help of Ginsberg and Kerouac, Burroughs wrote the novelNaked Lunch in Tangier, which continued to follow the exploits of William Lee in a disturbing drug culture journey. The book featured nonlinear narrative forms with elements of sadomasochism, metamorphoses and satire. Published in 1959, the book wouldn’t be released in the U.S. until the 1960s due to a highly publicized governmental ban over its content, which pushed Burroughs into the spotlight. He became a figure both acclaimed and spurned.

Around the time of Lunch's release, inspired by artist Brion Gysin, Burroughs began to experiment with the cut-up technique, where random lines of text were cut from a page and rearranged to form new sentences, with the intention of freeing reader's minds from conventional, linear modes of thought. Using this technique with elements of satire and sci-fi, the '60s saw Burroughs releasing novels like The Soft Machine (1961) and Nova Express (1964),

which indicted consumerism and social repression, and the nonfiction work The Yage Letters(1963).

Burroughs played with audio cut-ups as well via tape recordings. He released his first album in 1965, Call Me Burroughs, which featured his readings of text fromNaked Lunch and The Soft Machine. Burroughs not only made waves in the literary world but became a huge influence for many musical artists of the day. The acts Soft Machine and Steely Dan took their names from the writer’s work and Burroughs went on to collaborate with artists of the avant-garde like Laurie Anderson, Sonic Youth and Genesis P-Orridge.

Burroughs continued his literary pursuits as well in the early ‘70s, publishing The Wild Boys: A Book of the Dead (1971) andExterminator! (1973) and penning a screenplay, The Last Words of Dutch Schulz. By the end of the decade, he worked on a book with Gysin that delved into their cut-up philosophy—The Third Mind(1978).

Burroughs would face family tragedy yet again as his son Billy Burroughs Jr., also a writer, succumbed to substance addiction and died from alcohol-related trauma in 1981.