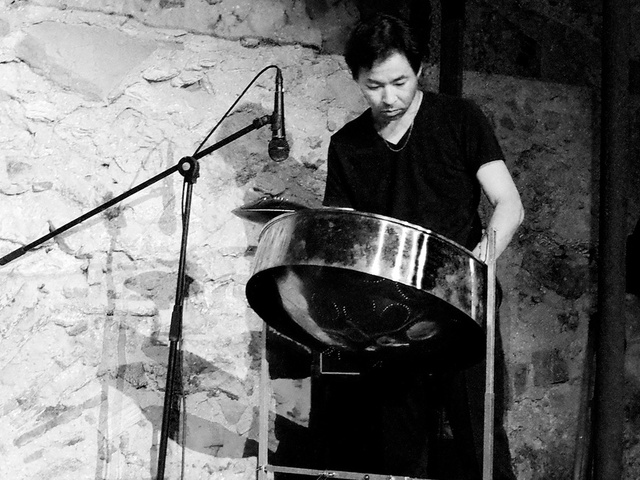 In the 90s, he was involved in international cooperation work in Asia, Africa and Mexico. Through this experience, he had opportunities to listen to rare ethnic musics and learned a lot. He was inspired by music, ceremony and culture based on Pan-East Asian sun worship basis. Then he had come out with collage painting and field recording works "Hypernatural series" featuring Asian gong (the symbol of light and the sun in Asian culture). He also became interested in live music, he released Generative Music work "Amorphous" by floppy disk (with a software "Koan" that Brian Eno used). In 2001, Machida started to perform improvised music with Steelpan (steel drum). Because steelpan has metal overtones as the same as gong. At first he used self-made Steel Pan "Amorphone". For getting basic drone sound supporting improvisation (like tampura), he often used Max/MSP processing system. The improvisation style has been influenced from traditional Indian music. Now he plays Steelpans acoustically and electronic Steelpan "PanKAT", too. Machida is also a band member of miimo (dub-electronica unit with tatsu and Norihide Saji) and "Ohanami" (with Tatsuhisa Yamamoto, a drumer of Jim O'Rourke band).

In 2004, Machida founded AMORFON, a music label / a platform for contemporary art event. He has released his solo albums, unique artists' works from Eastern Europe that have not been introduced so much and "Kindermusik: Improvised Music by Babies", a unique compilation album consisted of only Babies' improvisations as expressing concerns about music. He organized "Japan-Macedonia exchange art exhibition" in Japan and Macedonia for the first time for both countries. As a visual artist, Machida makes "PHOTOBATIK", his original technique using photographic paper. Machida also writes for magazines, has lectures and some unique workshops for children through his art activity.

"A collection of deft, unassuming and very attractive performances. - The Wire
"Machida goes a long way towards making a compelling case for the instrument. - Textura
"Worth hearing" - Signal To Noise
"Light and reflective... perfect for moments of cleansing and contemplation. - Brainwashed
"In a word, wow! Without question, one of my favorite records this year. - The Other Music
"Machida handles it intelligently and sensitively. - The Wire
"intelligent avant-garde music for the delicate ear - the All-Music Guide
"beautiful relationship between 'reality' and artifice - The Wire
"Great record of intelligent and thoughtful electronic music. - The Sound Projector
"Many of its pieces coming across as yearning meditations on things beyond our control." - Tokafi
"Subtle improv music that sounds like nice ambient." - VITAL