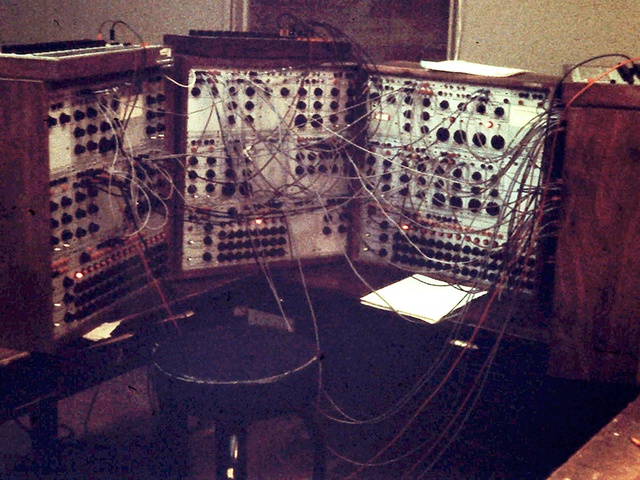 Warren Burt is a composer, performer, video artist, sound poet, writer, instrument maker (both in hardware and software, electronic and acoustic) and above all a pioneer who started to study modular synthesis back in 1969 at the State University of New York at Albany, with Joel Chadabe, and recorded these 2 compositions on a Buchla 100 in 1972.

At the time the pieces for our session were composed Ron Robboy wrote :

"Warren Burt is consumed with process.  Give the man a procedure, and he will find a piece or two or – let's be honest – ten embedded in it.  And for many years now, he has been fascinated by tuning systems as raw material. Another, perhaps less obvious, yet still indelible quality, a sort of core identity of Warren's music and sensibility, began to assert itself to me from the beginnings of my acquaintance with him and his work.
I think a first manifestation made itself apparent to me in a work he did at University of California – San Diego circa 1971 or 1972.  The piece was for Buchla Boxes, as they were called, the classic voltage-controlled synthesizer modules designed by Donald Buchla in the Sixties.  The image offered by the engaged modules, with erratic knots of patch cords growing out like thick weeds gone to seed, a harebrained flowchart gone Bad, was inevitably a source of pride to the practitioner.  I don't remember anyone ever bragging about the spareness of a lean patch, though that may just say something about me and the people I hung out with.  In the particular piece in question – I haven't any memory of every knowing its title – Warren moved completely out of the Box, so to speak.
The design principle behind Buchla Modules was that a simple waveform generated by an oscillator would be processed by other modules, e.g., filters, modulators, envelope generators, gates, and so forth. It was the oscillator that oscillated; everything else followed that. Warren, instead, turned to the gates, the modules that by opening or closing governed whether a signal could pass, and took the simple leap of having them open and close so rapidly that the very opening and closing, that alternation, entered the audio spectrum.  He had taken analog electronic equipment and made it, the hardware itself, into an acoustic instrument.  At the same time, the opening and closing of the gate mimicked the ur-digital principle: on or off, one or zero.  His system was simultaneously inhabiting acoustic, analog and digital space.
Was it a particle or a wave?  This was analog art par excellence, a musical parody of quantum mechanics.  The signal this gate oscillation generated, of course, was hardly a sine wave.  The whole system was shaking and vibrating, and one had the sense that everything, from a systemic level on up to nuts and bolts, was operating at the edge of its capacity to maintain cohesion.  Structural integrity may be the phrase an engineer would use.  The signal was rich and filthy and beautiful, and the harmonics of that complex wave formed the processing grist for his piece.
I loved the work, its funkiness and richness, and I deeply admired how he had moved on from the obvious to find extended techniques for the synthesizer modules just as he might for any acoustic instrument. (He was also by then, or soon to become, a member of the Extended Vocal Techniques Ensemble there at UCSD). Using extended techniques for acoustic instruments was already a commonplace at New Music centers, nearly de rigueur. If a piece could plausibly make the case that its compositional logic demanded a certain level of abuse to an instrument, all the more chic. D The same did not go for electronics, however.  In the climate of the time, it was funny to put a cello under water, but not so a circuit board, Jimi Hendrix or The Who and their theatrical destruction of equipment notwithstanding.  Warren's promiscuously democratic impulse was to level those distinctions.  His ability to more beyond reverence for Electronic Music, and see simply sound-making instruments, was inspirational to me." - Ron Robboy 2005