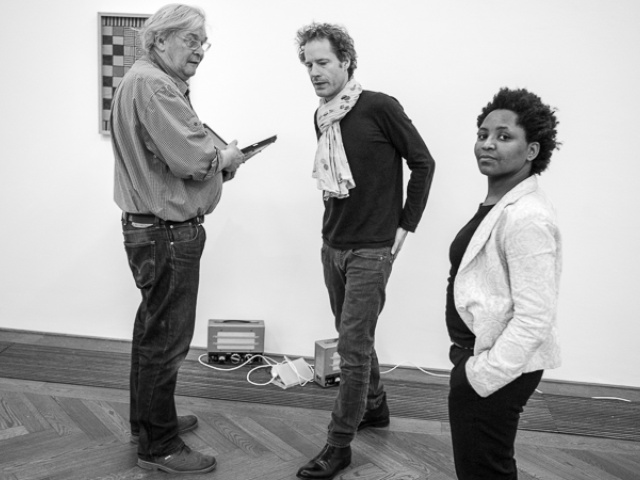 “Maria Mariza and maybe Marianna” is a soundscape with a selection of rough and manipulated field recordings from Tanzania, Cyprus and The Netherlands.
Created for Lost & Found (Young SDH/Korzo Theater), this radio composition was originally performed in a 6.2 surround speaker set up. It was premiered at Todays Art 2014, Den Haag (NL) but has never been broadcasted on the radio.

Aurélie Lierman (Karago, Rwanda °1980 )
Aurélie Lierman was born in Rwanda but grew up in Belgium from the age of two. She’s an independent radio producer, vocalist and composer. Lately Aurélie Lierman is trying new directions by fusing radio art, vocal art and composition. Her main focus is her personal field recordings: a large collection of unique sounds and soundscapes from rural and urban contemporary East‐Africa. Sound‐bit by sound‐bit she’s transforming and sculpting them into something she would call “Afrique Concrète”. Aurélie Lierman’s work has been broadcasted, exhibited and performed in Belgium, The Netherlands, France, Portugal, Germany, Italy, Austria, Romania, Israel, Cyprus, Switzerland, Ireland, UK, Morocco, South Africa, etc.
In May 2014 Aurélie Lierman won the First Prize at Monophonic 2014 (Brussels) for ‘Anosmia’, a radio composition reflecting on the Rwandan Genocide. In 2013 Aurélie Lierman won the 1st prize at Sonic Art (Rome) for her radio composition KARIAKOO ( a sonic portrait of a lively neighborhood in Dar Es Salaam, Tanzania). In the same year, she also won the 3rd prize at Grand Prix Nova (Bucharest) for her radio composition ‘iota mikro’ (based on field recordings from her birthplace, the Karisimbi vulcano, in Rwanda).
Aurélie Lierman had two album releases in collaboration with the British cult-group Nurse With Wound ( [SIC] 2013, “Santoor Lena Bicycle” 2014 on which she appeared as a sound artist and vocalist. Currently Aurélie Lierman is developing a series of site specific installations, performances and electro acoustic compositions for “Meanwhile, in Fukushima“. Some of them will be premiered this summer 2015.