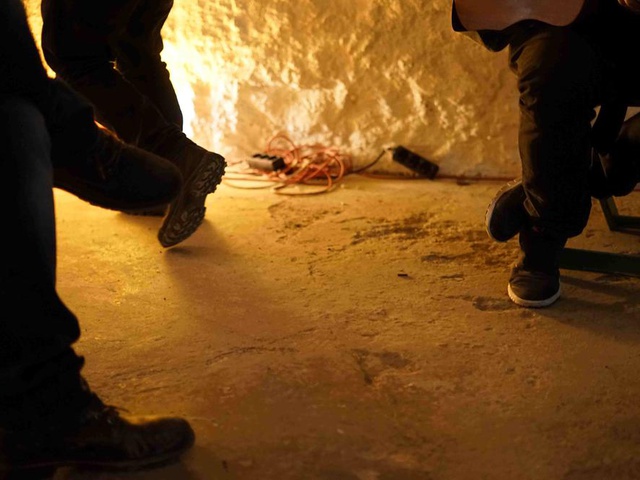 A show by the wiener-radia-kollectiv presenting the project PERSONAL SPACE project by Hernán Kerlleñevich (ARG).

Beside other projects, Hernán started his project „Personal Space“ during the residency in Vienna from December 2016 until February 2017.

„Personal Space is presented as an interactive sound installation in which the sound sources are human musicians, who react subjectively with acoustic instruments to the locations of the public, based on proxemic relationships.

The term proxemics refers to the use and perception that humans have of their physical space, their personal intimacy. It describes the measurable distances between the individuals while they interact with each other, their postures and the existence or absence of physical contact.“

(Tobias arranging a comfortable personal space for the participants.)

The first steps for realizing the project took place in Vienna at the temporary space Feldversuch feldversuch.speis.net with following musicians:

This sound art experiment was created during the sonic art visiting artist residency program, which was organized by SPEISkammertag-Verein zur Förderung digitaler Kunst und Kultur in cooperation with Panal 361.

Lale Rodgarkia-Dara initiated the call for this residency in Vienna and was part of the jury together with the radia-collective-Vienna.

The residency was part of an exchange programme. In 2016 an Argentinean artist was selected to take on a residency in Vienna with the focus on Sonic/Radio-Art. The Exchange-Call was announced in August 2015 hostet by Speisekammertag.

Conditioning Silence: a Sound Recording for the Living and the Dead, by Martin Kay (Radio One 91FM)

FROM Z TO A by Aymeric de Tapol (π-node)