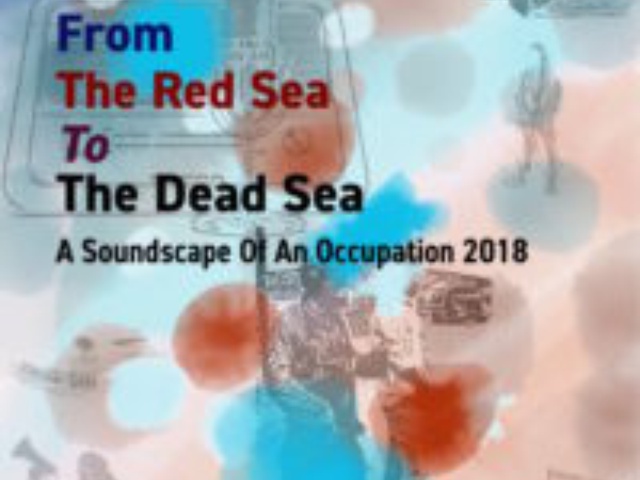 from the Red Sea to the Dead Sea (radioart106)

An abridged version of a program, produced by Meira Asher for Radiokunst-Kunstradio ORF Vienna, in the frame of the Nebenan – Erkundungen in Europas Nachbarschaft: Israel Serie.

There is a project by the Israeli state to make life intolerable for the Palestinians remaining in the Jordan valley, the West Bank, for the purposes of de-facto annexation of this land and its resources. This introductory composition is focused on the evacuation and demolition orders issued to the Palestinian communities by the Israeli Civil Administration.

2. The Sea That You Cannot See (by Dganit Elyakim)
dedicated to Haitham Khatib

I asked my friends to describe the sea to their beloveds from the other side of the barrier, the ones who are prevented from approaching it.

The actor, director and writer Mohamad Bakri described the sea to his friend Hassan; Hanan Zaid Elkilani, a young, emerging art student, portrayed the sea to her father’s friend, Prof. Ahsan Eldick, from Nablus; Maya Felixbrodt (viola) played for the freedom fighters Ahed (16) and Nariman Tamimi from Nabi Saleh; Adaya Godlevsky (harp) dedicated her playing to the children of Palestine; and Samira Saraya painted the sea in words and sang for her family in the refugee camp in Jenin.

At the center of this piece there is a field recording of a family, captured from a distance. On first listen there doesn’t seem to be anything particularly special about this recording; but over the course of this reportage it becomes apparent that the act of documentation may register more than one might have initially suspected.

an audio guide to occupation is a sonic archive, using found materials from the daily life in occupied Palestine. It makes use of minimum sound manipulations.Mostly isolating moments, categorising, and at times layering. It is intended to be an ongoing documentation

The complete program can be heard here: