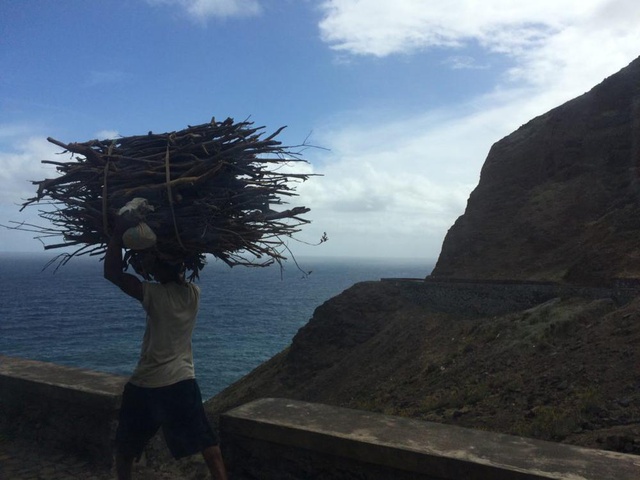 This work is an attempt  to recreate the sound memories of the encounters and situations lived and experienced in the journeys between the islands of San Vicente and San Antão, in Cabo Verde
The Ferry Boat provides the transport between these islands carrying and bringing workers, documents, belongings and stories of kinship, rivalries, loves – much of them sung in mazurks, mornas and other local musical genres.
The work was part of a project funded by the Brazilian government and it was one of the
achievements of the policy valuing cultural, economic and scientific partnerships between
Portuguese-speaking countries. It is perhaps important to remember that this project existed during the years 2012 and 2017, a period that preceded the current cultural and political conservative ascent in Brazil.
When I arrived on the island of San Vicente, it was carnival and Mindelo, the capital city,
offered, on the one hand, a version of the Brazilian  Carniva, and on the other, the resistance of an almost tribal carnival of the Mandigas.
In San Antão the experience on my arrival was another. I moved to the rural area and was
surprised by a show of synchrony and rhythm between three women using a large pestle to percussively crush and grind the corn.
San Vicente also has rural areas with small farms and there I came across a windmill and listened to the quiet prose of two workers. This contrasted with the sound eloquence inside the Fish Market of Mindelo, where I witnessed mainly the sound of knives scraping across fish scales.
In contrast, San Antão seemed mysterious and mystical. At the radio station I met a group of musicians who were recording a samba for the Mindello carnival. They began to remember and play many Mazurks and I recorded the whole process, starting from the first tentative versions.

Back in Mindelo, between the carnival and the incursions into the Municipal and Fish Market, I met Seiva, a local rapper who is a respected figure with an important work already recorded. His dream is to leave Cape Verde in order to find a wider audience for his music. With the sounds taken from my trips between the two islands, I created a percussive backdrop for his verses.

Participated with musical pieces or performances of the following festivals:

Artist commissioned by the Kunstradio radio station in Vienna to compose the music-video Memory of the Fire(2015), and artist commissioned to create a sound installation Orixás Sonoros to the front of the Hellerau theater (2016).

He participated as an advisor at the Smetak’s inventions exhibition organized by DAAD at the DAAD galerie, also wrote texts to catalog and opened the Symposium Re-thinking Smetak with the lecture called Itinerary of Caosonance, about Walter Smetak, all these activities within the MaerzMusik Festival (Berlin, 2017).

At the end of 2016 he was contemplated by the program Ibermúsica with a prize and order to compose for the Chilean group CEMLA. In 2017, during artistic residence in Chile, composed the music 4 Crónicas acerca de la ciudad y la ancestralidad: Belo Horizonte, San Pedro of Atacama, Valparaíso that released in June, 10, during the Seminario Nuevas Músicas Latinoamericanas, in Valparaiso, Chile.

In 2017 he was invited to participate in Documenta 14 (documenta de Kassel – radio), with the works Rios Enclausurados and Magnum Chaos within the Brazilian radio documenta. Still in 2017, he was invited to participate in the compilation made by Rui Chaves and Paulo Dantas that presented a selection of brazilian artists working with ‘field recording’, the cd called “O tempo entre uma ação e outra” (released by Green Field Recordings).