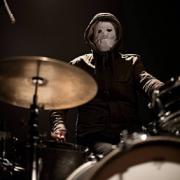 Jerusalem In My Heart: has been a live audio-visual happening since 2005, with Montréal-based producer and musician Radwan Ghazi Moumneh at its core. Moumneh is a Lebanese national who has spent a large part of his adult life in Canada and has been a fixture of the Montréal independent music community from his early days as guitarist in various notable 90s bands to his tireless activity as a sound engineer and producer over the last decade. Moumneh is also active in the Beirut and Lebanese experimental music scenes, where he spends a few months every year.

Will Guthrie:
"Sacrée Obsession", the new album from the Australian percussionist extraordinaire Will Guthrie, comes out of his continuing research into repetition, the ritual, physicality through volume and mass, and complexity through the development of simple ideas. Combining pulse and rthymic ideas with melodic and pitch based textures he has succeeded in making truly unique music.

Obsessive development of minimal material is not new in Will Guthrie’s music, from his brutal tribal like and non romantic vision of free jazz with THE AMES ROOM, to thinking long with the likes of Oren Ambarchi and David Maranha, obsessively working through reduced material has been central to Will Guthrie’s music since his debut solo recording "Building Blocks” in 2003.

With Tetris like logic in it’s architecture, TIMELAPSE uses notes and tones hung out in space, beautifully resonating in the magical Chapelle Saint Jean in Mulhouse where it was recorded. PACEMAKER on the flip side recorded at Le Lieu Unique in Nantes, is multi layered and multi dimensional in it’s and sonic and rhythmic possibilities, using repetition, resonance and mass to create a hypnotising music which is simultaneously powerful and subtle