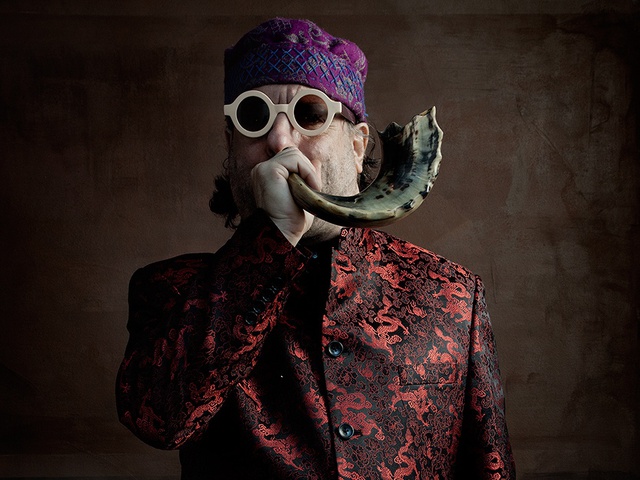 Tonight a long talk with Frank London and a lot of live music of The Glass House Orchestra.

The word prolific doesn’t even begin to describe Frank London. Of course, there is the Klezmatics, which he co-founded in 1986. Frank plays trumpet and keyboard and sings with the group and he’s written many of the Klezmatics’ most popular songs. But his mile-long resumé has also seen London adding virtuosity to hundreds of concerts and recordings by everyone from John Zorn to They Might Be Giants, Mel Torme to Iggy Pop, Pink Floyd, Youssou N’dour, LaMonte Young, Allen Ginsberg and LL Cool J! Called the “mystical high priest of Avant-Klez jazz,” Frank has made 30 solo recordings and is featured on over 400 CDs. His current projects include the dance theater work Salomé, Woman of Valor (with Adeena Karasick), the Yiddish-opera-in-a-Cuban-nightclub, Hatuey (with Elise Thoron), Astro-Hungarian band Glass House Orchestra, Sharabi (bhangra-klez with Deep Singh), Ahava Raba (with Cantor Yanky Lemmer), and Vilde Mekhaye (Eleanor Reissa + Frank’s Klezmer Brass Allstars). He’s a regular face on New York’s cutting-edge downtown club scene and music festivals everywhere, and has written dozens of scores for theater, film and dance. He collaborated with Judith Sloane on 1001 Voices: A Symphony for a New America for the Queens Symphony Orchestra and choir. He was music director for David Byrne and Robert Wilson’s The Knee Plays, collaborated with Palestinian violinist Simon Shaheen, taught Jewish music in Canada, Crimea and the Catskills, and produced CDs for Gypsy legend Esma Redzepova, and Algerian pianist Maurice el Medioni. He was even featured on the soundtrack to Sex and the City!

Of course London is mainly known for his contribution to contemporary Jewish music. When he first heard klezmer music, Frank says, “I was very blown away by the funky rhythms, the polyphony, the wild old-world, old school ornamentation, the particular way it expressed its Jewishness and how the instrumental music was not at all kitschy or corny the way most Jewish music I had heard up to that point was.”

Frank London graduated from New England Conservatory with a degree in Afro-American music. While living in Boston, he played with a host of diverse groups, from the Klezmer Conservatory Band (a founding member, playing on their first six recordings) to the Haitian band Volo-Volo to the salsa band Los Hermanos Pabón, Mark Harvey’s new music big band Aardvark, the world music group Les Misérables Brass Band, and the improvisational Ensemble Garuda. “Playing a genre or style of music is like learning a language,” he says. “You need to know the vocabulary, grammar, syntax, content, history, idioms and inflections in order to become fluent. But improvisation is outside of style; it focuses on the sonic ontology of music. What is sound? What are the aesthetics of sound and silence? These questions are at the center of all my music.”

After settling in New York City in 1985, London began working with the all-star ensemble led by auteur Kip Hanrahan (which also included Jack Bruce of Cream), and then started working with Hasidic wedding musicians and learning the style and repertoire of Jewish music, as well as becoming involved in Hasidic philosophy and community. He also became a member of Lester Bowie’s Brass Fantasy. Then, after answering an ad for klezmer musicians, Frank met Lorin Sklamberg and the Klezmatics came to be.

Among London’s other projects are the internationally acclaimed folk-opera A Night In The Old Marketplace, Davenen for Pilobolus and the Klezmatics, Great Small Works’ The Memoirs Of Gluckel Of Hameln and Min Tanaka’s Romance. His Klezmer Brass Allstars‘ CD Carnival Conspiracy was awarded the German Grammy; the Hasidic New Wave’s entire recorded oevre has been released as a box set on Tzadik Records, he completed two commissions for Carnegie Hall and served as an artist-in-residence in Krems, Austria. Green Violin, his musical theater piece about the Soviet Yiddish theater written with Elise Thoron, won a Barrymore Prize for best new musical. London is on the faculty of SUNY Purchase, and is currently Artistic Director of KlezKanada. With each new undertaking, London brings his knowledge of the music’s traditions and aesthetics with him, “showing a way for people to embrace Yiddish culture on their own terms as a living, breathing part of our world and its political and aesthetic landscape.”