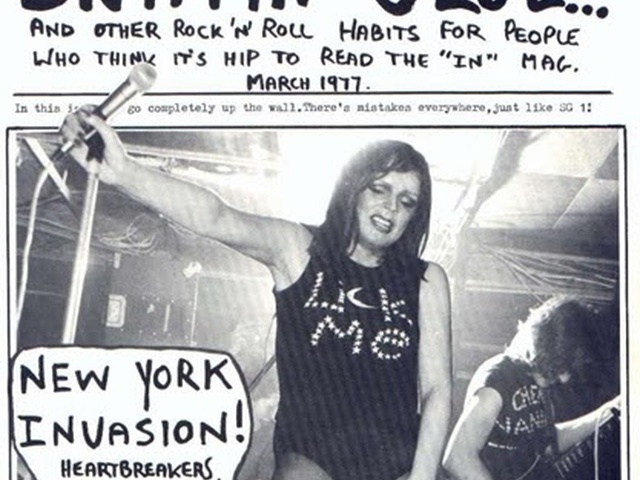 Before Alternative TV, Mark Perry started the first UK punk fanzine, Sniffin’ Glue, in July 1976 after hearing and seeing US punk band, the Ramones. He was working as a bank clerk at the time.

Within a few months Mark had left his job and Sniffin’Glue had become an essential part of the growing UK punk scene which included bands like the Sex Pistols, the Clash and the Damned. As the main punk writer, Mark became one of the most important personalities in the scene, making numerous media appearances to explain punk to the masses.

In early 1977, Mark started the Step Forward Records label with Miles Copeland. Releases included early records by the likes of the Fall, Sham 69, Chelsea and the Cortinas. Mark was also involved with Miles’ other labels, Deptford Fun City Records and Illegal Records.

In March 1977, Alternative TV were formed by Mark Perry (vocals/guitar) with guitarist, Alex Fergusson. ATV (as they are known) played their first gig at the Nottingham Punk Festival in May 1977. They released their first single, ‘Love Lies Limp‘, as a free flexi disc given away with the last issue of Sniffin’ Glue (no.12), August 1977.

Following an abortive demo with EMI, ATV released the first proper single, ‘How Much Longer‘/’You Bastard‘, on Deptford Fun City Records. Following various line-up changes, their first album was released in May 1978.

Becoming fed up with the punk scene, Mark took ATV into areas of experimentation in late ’78 and, after playing as the Good Missionaries for a few gigs, the band broke up for the first time in late 1979.

During 1980, Mark released a solo album, ‘Snappy Turns‘. He also played drums for the Lemon Kittens and the Door & the Window and sung with the Reflections. ATV reformed briefly in 1981 and recorded the ‘Strange Kicks‘ album for Miles’ label IRS.

Mark left the music biz in 1982 but was soon back in 1984 with a new ATV line up and playing gigs like Alan McGee’s early Living Room Club. The band continued, on and off, into the mid 90s playing various gigs and recording for various labels along the way. This period focused more on Mark’s songwriting abilities than on ATV as a punk band.

In 1995, ATV played a punk festival in Bath and went back into the punk fold for a few years, bringing more of the older classics back into their set. ATV have continued to play live, although they are, once again, playing a more eclectic set.

In 1996, Mark got back into writing by providing the text for Erica Echenberg’s photo book, ‘And God Created Punk‘, which was published by Virgin. In 2000, Sanctuary Books published ‘Sniffin’ Glue: The Essential Punk Accessory‘, which compiles all the issues of Mark’s fanzine along with lots of new writing and photos.

In January 2001, Alternative TV visited New York for the first time and played a few gigs including an appearance at Punk Magazine’s anniversary party at CBGB. In April they returned to NYC at the invitation of Spin Magazine to play their 25 Years Of Punk party, again at CBGB (a live CD of this show was released in May 2002). In August 2001, the band released a new studio album – Revolution – and did a tour of the UK.

In the summer of 2002 Alternative TV started work on their next studio album, working title: ‘Inside Project‘. On the writing front, Mark has written the booklet notes for the new Saint Etienne album.

ATV’s last studio album for over a decade, Revolution, was released in 2001, followed in 2003 by the official bootleg album Viva La Rock’n’ Roll – consisting of live performances recorded in the UK, France, Germany and the US. In 2004, Perry recorded the Ramones song “Now I Wanna Sniff Some Glue” for a single and an Argentinian Ramones tribute album.

In recent years, the lockdown and today's technology have made Alternative TV's recordings evolve from group recordings to individual sessions.