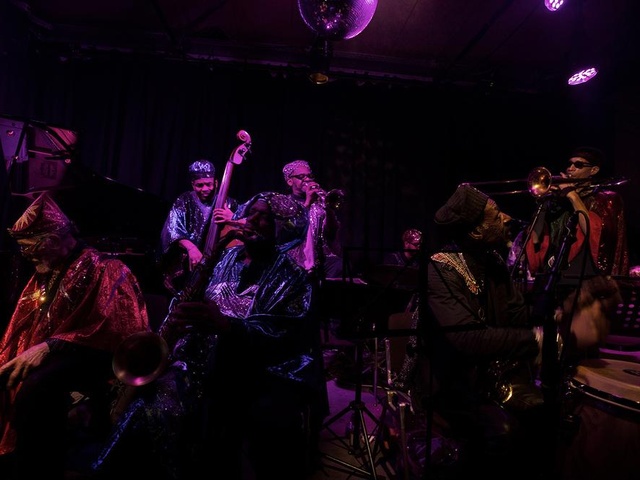 Tonight we have the great pleasure to present you an interview with Marshall Allen and Danny Ray Thompson from the Sun Ra Arkestra and live recordings of their concert at les ateliers claus off the 25th of March.

parts of the concert at les ateliers claus of the 25th March 2017.

Welcome to one of the greatest big bands of all time - The Sun Ra Arkestra. Operating under the direction of saxophonist Marshall Allen. With such a massive, joyous songbook and the kind of well organised chaos that sees their legendary 3 hour sets move deftly between rolling grooves, sing-along chants and atonal blasts of mischievous brass, the Arkestra remain one of the most unmissable live acts today.

“By the time that the show winds to a close, the audience joining in call-and-response style, The Arkestra snaking through the audience in their traditional procession, honking, clapping, chanting and leading the way along the path that leads to the stars. During the band’s first decade, in response to a criticism that Sun Ra was “too far out”, that other legend of the piano, Thelonious Monk, famously replied, “Yeah, but it swings.” Even a half century later, how right he was.”

SUN RA
Sun Ra was one of the greatest and least known jazz artists of the last four decades, whose influence on diverse musicians is little known to the general public. A pianist and band leader, his style ranged from retro swing to avant free, and often in the same piece. His band could play a swinging Gershwin tune and almost imperceptibly soar into their free cosmic equational tones as if they possessed a single mind.

Ra was a keyboard improviser of great originality, but his foremost talent was for inspiring and teaching creative musicians to improvise freely but together. This tension between freedom and coherence was something he explored with abundant energy and skill.

Sun Ra died in 1993. The Arkestra performs today, under the direction of alto saxophonist Marshall Allen.

As a young musician, Marshall Belford Allen (b. May 25, 1924) performed with pianist Art Simmons, Don Byas and James Moody before enrolling in the Paris Conservatory of Music. After relocating to Chicago, Allen became a pupil of Sun Ra, subsequently joining the Arkestra in 1958 and leading Sun Ra's formidable reed section for the next 40 years. Marshall, along with John Gilmore, June Tyson and James Jacson, lived, rehearsed, toured and recorded with Sun Ra almost exclusively for much of Sun Ra's musical career. As a member of the Arkestra, Allen pioneered the Free Jazz movement of the early sixties, having remarkable influence on the leading voices in the avant-garde. He is featured on over 200 Sun Ra recordings in addition to collaborations with Phish, Sonic Youth, Digable Planets and Medeski, Martin & Wood.

Allen assumed the position of Arkestra Musical Director in 1995, following the ascension of Sun Ra in 1993 and John Gilmore in 1995. Marshall continues to be committed to the study, research, and development of Sun Ra's musical precepts and has launched the Sun Ra Arkestra into a dimension beyond that of mere "ghost" band by writing fresh arrangements of Sun Ra's music, as well as composing new music and arrangement for the Arkestra. He works unceasingly to keep the big-band tradition alive.

Danny Ray Thompson arrived on the planet 10/01/1947 in New York City. Moved to Los Angeles with Family Graduated La High School in 65. Played music in High School Band and with various youth bands there. Moved back to Harlem and studied for a year at night school Julliard School of Music. Studied with Garvin Bushell Flute and Alto sax,studied briefly with James Spaulding Flute. First professional gig with Babatunde Olatungi in 66, there met Marshall Allen and John Gilmore,studied Alto and Flute with Marshall Allen. Met Sun Ra through them. Joined the band in 67. Moved to Philadelphia with Sun Ra in 68. Became Arkestra Manager in 81 and remained in that position till 89. I play Baritone,Alto sax's, Flute,Percussions. Took a brief leave of absence for 7 years. Rejoined the band in 2002. Still with the Sun Ra Arkestra at this time. Influences Sun Ra, Marshall Allen, John Gilmore, Olatunji, Coleman Hawkins, Harry Carney, John Coltrane.