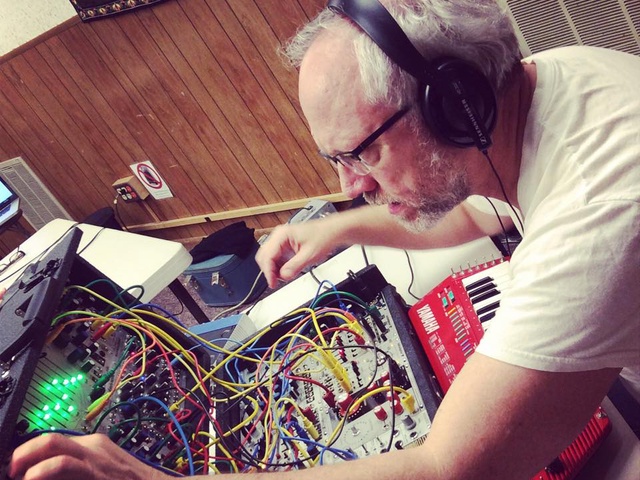 Following a recommendation from Gino Robair I was introduced to the art of Tom Djll and the more I have been discovering the luckier I feel, obviously proud to share the music of another essential likeminded San-Franciscan modularist…

Would you please give a resumé of your musical activities?
Musical biography?
To some I'm better known as an extended trumpet player, and instigator of the free improvisation project Grosse Abfahrt. Did my BA in Colorado, 1979. Studied for a few sessions at the Creative Music Studio in Woodstock. I started playing gigs in 1981, in Santa Cruz, California. Moved to the Bay Area in 1985 and started getting involved in the scene there and around Mills College in Oakland (MFA 1995). And that's where I stuck. My major teachers were Roscoe Mitchell, Anthony Braxton, Pauline Oliveros, and Jack Wright. Everyone you play with becomes a teacher, naturally, so the full list is quite long. It's a supreme blessing to meet so many beautiful, exceptional human beings along the way. This is the essence of life: to share experiences with others.

What have you been working on lately, and do you have any upcoming releases or performances?
I have six or seven projects going at any one time, different groupings with like-minded players. With Gino Robair's Unpopular Electronics, we have done some collaboration with the Rova Saxophone Quartet, and hope to do more. Gino and I are 2/3 of Tender Buttons, with pianist Tania Chen, which has one LP released (Forbidden Symmetries, on Rastascan) and another in production. We'll be doing some shows on the West Coast in February 2020. Tim Perkis (of The Hub) and I have a longstanding duo, Kinda Green. There's some stuff under that name on Bandcamp and we're working on a very intriguing, very fucked-up "fusion" direction at the moment, using heavily processed trumpet and his self-coded musical systems. Clarke Robinson (of Clarke Panels) and I occasionally perform as an electronic duo under the name Runcible Spoon Fight. There's also the work I do with EUPHOTIC with natural sound artist Cheryl Leonard and Bryan Day, who is a master instrument maker/coder/provocateur. We each come at the music from wildly divergent backgrounds and approaches, yet somehow come together to make some uncanny soundscapes together. This last summer I released a solo work of circuit bent and modular electronics, FAILED ECOSYSTEMS (also on Bandcamp) and in 2018 Other Minds released a collection of my early electronic work (Modern Hits netlabel). And there are several other recording projects under way that have less to do with electronics.
How were you first acquainted to Modular Synthesis?
At my college they had installed a fancy new electronic music studio with an EMS Synthi 100 and a Scully 8-track tape machine. My first experiments were on that massive system, but since I had scant training, not much came of it. I kind of got as far as what an oscillator did, and what a filter did. I did some microtonal music with it by patching up a keyboard with "wrong" scaling — the higher the keyboard note, the smaller the interval to the next note. I loved the sounds that resulted: absolutely unbound to any system that had anything to do with "music."

When did that happen? When did you buy your first system?
I was working on the Synthi 100 in 1978 and 79. After school, a friend gave me a flyer outlining the "Serge Modular Music System" and I fell in love with it. I began building one of my own, which was a complete 4-panel system by 1983, enclosed in a wooden case (with an anvil case thrown in). You could build Serge panels from kits then, which was a big cost-saving. There was no one around to show me how to fully exploit it, so I proceeded on an improvisational basis (and also using the excellent Serge manual by Rich Gold, Darrel Johansen and Marina La Palma). Around 1989 I made a major change, adding a digital delay to my kit, integrating it fully with the Serge via 5V control voltages, and this live-sampling-mutating system became known as the MUTOOTATOR. By 1998 I was done with that system and had a baby to pay for, so I sold it all and just focused on trumpet for about. In 2012 I went to a circuit bending workshop led by Nic Collins, and that put the electronic bug back into my brain.

What was the effect of that discovery on your compositional process?
On your existence?
I have studied mainly improvisational music making my whole life, with some side-trips into dodecaphony, Deep Listening, and computer music. That training in improvisation, and also the Deep Listening, has ingrained in me a ready acceptance of whatever is happening, and therefore a willingness to work with whatever tools are at hand. Analogous to Jackson Pollock's use of cheap aircraft paint for some of his works, when he was scuffling, so too, I used home cassette recorders for my early music, as well as found objects, toys, junk, and broken instruments to create what has been called "modern urban folk music." In the modular world, I wanted to let the circuits speak their raw native language, rather than me impose pre-determined musical structures and tonalities upon the circuits. I have quite a bit of keyboard training and compositional experience, but I don't generally incorporate any of that into my electronic music. I prefer it raw and immediate.

Quite often modularists are in need for more, their hunger for new modules is never satisfied? How do you explain that?
I think most of us are looking for new sounds all the time, and the inherent "reason to buy" of many new modules claims to answer that search. Also, often there's the promise of new systems or new ways of controlling sound-structures and events. I was really happy to get back into the Serge world a couple of years ago, after several years of Eurorack-exclusive work, because of the patch-programmability. It's much more direct at getting to interesting systems of circuits speaking their own language. If you need to be tight with money, you can exploit the after-market for modules and trade until you find what you really like. I kept a tally of all the filters I've bought and sold since 2014, searching for the right ones. Out of a total of fifteen I've kept five. Not coincidentally, the ones I kept are all of the twin-peak type, or a variant thereof. Taste in filter response is personal, because they can produce such human-sounding results.

Would you please describe the system you used to create the music for us?
I decided to go brutalist, and do a really "dry" concrete piece with a rigorously minimal set of resources. I used a portable lunchbox system running on USB-charger power, designed by Tom Whitwell, and built for me by Clarke Robinson. I selected and populated the modules, which are, from left to right: Iaeskul F. Mobenthey "Mister Grassi" touch controller/rungler; Qu-Bit ION multiple function generator; Tiptop ONE sample player; 2HP FREEZ looper/granulator/decimator; Epoch Modular TwinPeak Filter; and an Erica Pico series Output. Even this small set of modules provides a lot of options. I've been working with this system for about two years, although not at all in the last year or so. So I came to it pretty fresh for this piece.
Can you outline how you patched and performed your Modulisme session?
I patched the system using exclusively elbow-cables, so that it can be closed while fully patched. (There's a row of mults that really helps in this regard.) The Mister Grassi provides 6 outputs of high-speed 'rungler' circuits, which, depending on the style of contact, deliver chaotic changing voltages, or, upon release, a steady randomly-determined voltage. Steady tones are also possible. (You can hear them occasionally throughout the piece.) Most of the rest of the system is driven by these voltages from the MG. EON is driven from the MG and it outputs voltages to the filter and the sampler. Sometimes the FREEZ engages in a chattering loop. It and the ONE sampler can be triggered manually as well. The filter offers two inputs: one, right from the sampler, and the other from the FREEZ, which can be manually mixed. To select samples I used the dial on the ONE, with random results.
For sample sources I mainly used my own field and found recordings: birds, dragging, rubbing, and striking objects around the home, odd trumpet sounds, feedback, noise toys, an old out-of-tune piano. (There are a few passages using Tiptop cards sounds: Bent, Datach’i, Dots and Hybrid.) I did seven or eight takes and used five, laid end-to-end, no overlaps or overdubs or effects at all. The result is what I would call chance-determined concrete music.

What would be the system you are dreaming of?
I've never worked on a Buchla system, so that remains un-checked on the bucket list. (The original Buchla 100 was at Mills, but it wasn't working when I was there.) But I'm still working in the realm of prepared-trumpet, incorporating electronics, and I'm working with Bryan Day right now to build a system that incorporates some of my wild ideas for trumpet-triggered electronics and trumpet-driven trumpet manipulations, in feedback loops of both sonic and control signals.

Are you feeling close to some other contemporary Modularists? Which ones?
Gino, obviously; our mutual friend Andrew Raffo Dewar, who is doing great work with Serge now, having conquered the world of interactive electronics + saxophone; Richard Scott, who is a magician! Thomas Lehn, who also has a magic touch and probably my most-thumbed catalogue of recordings on modular. Also KF Whitman, Bran Pos, Clarke, Doug Lynner, Sarah Belle Reid, Martin Freeman, Raub Roy... and I want to mention Michael Johnsen, whom I had the pleasure of performing with a few times in 2005. He was doing floorcore improv with his own Tudoresque network of handmade and bent electronic devices. Absolutely captivating and unique, full of life and surprises. (He designs modules for Pittsburgh Modular now.)

Which pioneers in Modularism influenced you and why?
I loved Richard Teitelbaum's work with Anthony Braxton back in the 70s. And Hugh Davies' hard-to-pin-down work, although he was more of a builder-improviser — same goes for Michel Waisvisz. There was the pre-digital work of Bob Ostertag, who worked widely in the free improvisation environment. Eliane Radigue and Pauline Oliveros, who brought us back to a place that's "in tune." And then Sun Ra and Peter Cosey, both pioneers of what has come to be called Afrofuturism, helping rescue the world from Western-dominated logics. And David Tudor — can't forget his contributions in de-centered networks of homemade single-function modules, all chorusing together in a Rainforest. All those people were working in a challenging environment, with much cruder tools than we have today. But the most inspiring electronic music for me has always been Stockhausen's Kontakte. Talk about primitive tools! He was the first granularist, shaping individual impulses by hand. Literally sculpting sound. We cannot imagine working this way, today. But his work remains the standard, both for its theoretical robustness and balls-out power of expression. Only Xenakis matches him in those areas.

Any advice you could share for those willing to start or develop their "Modulisme" ?
Be fearless! In art there are no wrong answers. Get to know yourself, if you can. (Without fear!) Don't get attached to what is working, because it soon won't be. It's not art unless it has the potential to be a disaster. Be fearless! And, if you've just got to use a drum machine, for shit's sake do something interesting with it.