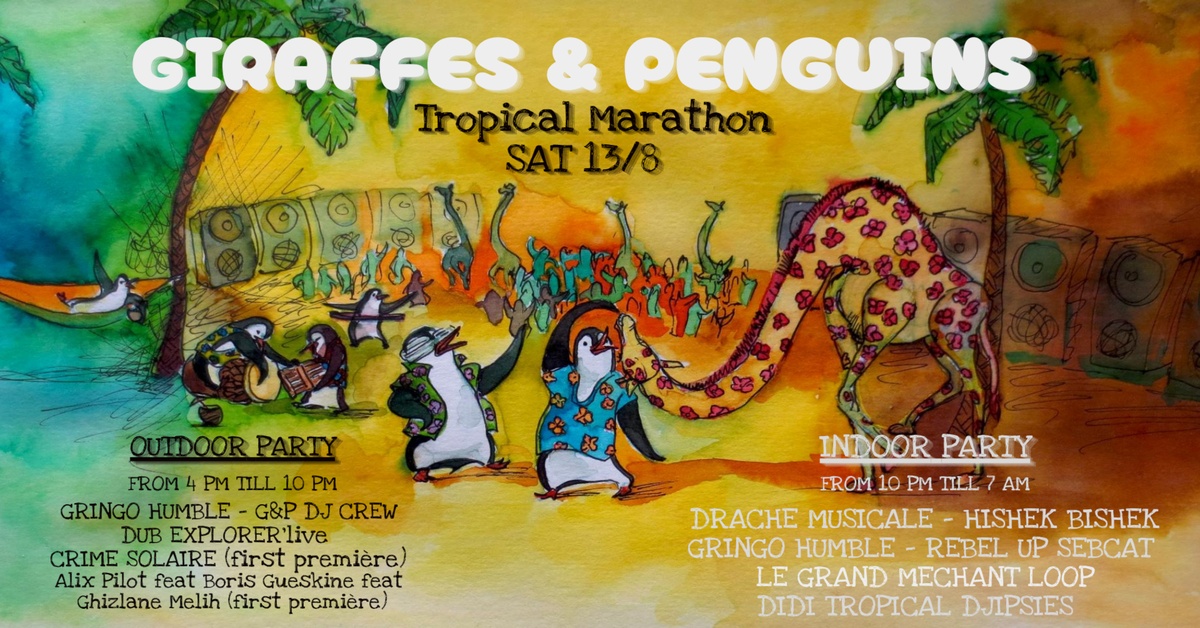 Let’s gather all together at Guinguette Gustaaf Guidon for a

We will start at 16h, outdoors & under the sun, with a handful of outernational live acts curated by our good friends of Gringo Humble collective. There will also be home-made food by Humanaterre, nice and copious enough to make sure that you can charge your batteries to the fullest.
Then, when the sun goes down, we’ll move to the cave (ex-Bistebroek) to sweat on wild global underground sounds... until the sun is up again

Psychedelic afrolatin band mixing electronic music with live instruments such as didgeridoo, cajon or dahbukha.
Be prepared for a gulash made of the best vibes. Niko Dubwise & El Druida will make the sound great again !

Dub Explorer Sound System is a young crew from Belgium.
Founded in January 2017 in Brussels they began to create their own dub universe full of Jamaican and English roots music but also a lot of psychedelic and stepper influences. Quickly the folk music was the main point of the exploration.
The Dub explorers are also proud to spread a strong political message about the need to open up the borders.
In the end of 2019, Dub-O-Russ joined the band to bring a violin magic touch to the band and few months later, Kamala joined also the adventure for the live chant. And in 2022 Thomas came in the crew to provide a final accordeon touch.

Hip-Hop electrodub live with 3 mc's & 1 dj. Be prepared for a skanky atmosphere...

Alix Pilot was raised amidst guitars and synths shaking his family home and received his (real) musical baptism of fire with his brother in Padawin. It was an initiation in Dub/ Bass Music under the infusing influence of Jarring Effects that was roaring then in France (and beyond). Padawin would have a great prime with the release of their album Atlatis in 2013.
This desire for intermingling inherited from a very Anglo-Saxon electro culture - somewhere between Mala and Massive Attack - is expressed, in particular, in the current collaboration with the Franco-Moroccan singer Ghizlane Melih, with whom a few songs are to be released by the ODG prod label in September 2022.
Ghizlane unveils a lyrical voice, powerful and bewitching, nourished by multiple influences, after being introduced to traditional classical music from the age of 10 and inspired by Egyptian and Moroccan classical music ( Oum kalthoum, Mohammed Abdelwahab, Ismahen, Mohammed El Hiyani, etc...).
This live is sublimed by the participation of the talented violinist Boris Gueskine, who develops a melodic, aerial, and totally singular game with his artistic sensitivity and poetic universe. He creates a hybrid phrasing, in which both his classical and jazz experience meets the jerks of electronic music.

Hishek Bishek Collective is composed of DJ Tirrred, DJ Ftoch and Tarek Reda who recently joined them. They (re)mix different genres from the SWANA, from reggae to electronic over dub to chaabi and mahraganaat! Their mission is to make the people dance to and sweat with them.
Tarek Reda is a Brussels based musician/producer turned dj. Originating from both Cairo and Alexandria in Egypt, his sets focus on contemporary electronic Egyptian music ranging from sha3bi to hip-hop to techno. It is all about the groove and non-stop dancing, so bring your most comfortable pair of shoes.

Busy bee do-it-all DJ/selector SebCat is behind the Rebel Up collective and record label, co-creator of Festa Afro Tuga and Giraffes & Penguins crews and promoter/curator of countless parties in Brussels and beyond. He hosts several radio shows & sessions on Radio Campus Bruxelles (Nightshop), BRUZZ, and Kiosk Radio, as well as infrequent residencies on We Are Various, East Side Radio and Lusophonica (Lisboa / PT). Since 2018 Rebel Up is a record label that puts a focus on eclectic outernational sounds from far & upclose with 25 releases and counting. Rebel Up DJ sets travel between tropical vinyl and contemporary electronic global sounds of past & future styles.
https://www.mixcloud.com/Rebel_Uppa
https://rebeluprecords.bandcamp.com

Didi landed in Brussels from Lisbon and became a solid member of the Rebel Up, Festa Afro Tuga and Giraffes & Penguins crews. Known as the smile behind the ticket booth or energizer on the dancefloor, since March 2019 she can be found behind the dj booth with her feminine dj crew Tropical DJipsies, which started at Giraffes & Penguins. She performed in many events and radio shows in Belgium and Portugal, festivals like Esperanzah or La Nature and organizes all female line up nights in Brussels (at VK, Kirikou, Zoart and others). Her selection is a trip around the world colored with female global sounds, percussion, rhythm and bass!
https://www.mixcloud.com/TropiCalDJipsieS/
https://www.facebook.com/TropicalDJipsies

“I prefer to make little pigs dance rather than to eat them !”
Le Grand Méchant Loop is a global underground DJ and percussionist based in Brussels. Founder of Giraffes & Penguins, he is always on the quest for lesser-known musical genres from the four corners of the globe. Sailing between tradition and modernity in his eclectic DJ sets, he will be your travel agent and cardio coach all at once !!
https://www.facebook.com/LeGrandMechantLoop/videos/808811612834681/