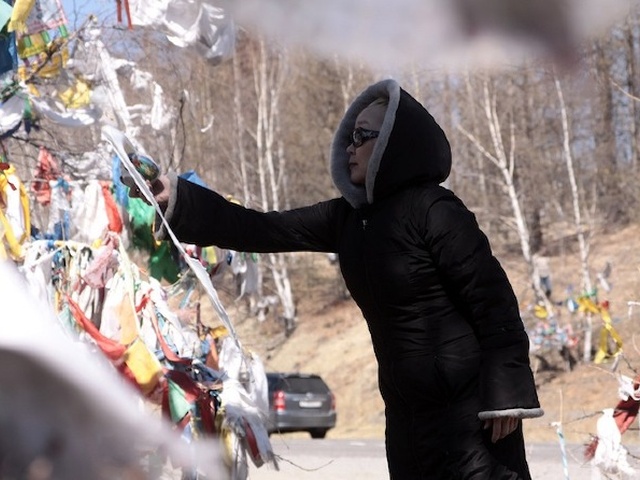 Sainkho Namtchylak is a singer. She was born in one of the small villages in the middle of many gold fields in the Republic of Tuva (South Siberia, Russia). Her ancestors were nomads, and her parents worked as teachers. She studied at the musical college, but was later expelled because she was unable to work in this field. She continued her studies in Moscow, where she moved to finish college. Namtchylak then graduated from the Gnesinsky Institute in Moscow, specialising in singing. She mastered various vocal techniques of traditional throat singing, as well as the principles of harmonic music. Namchylak's professional career began as a folk singer in the Sayani folk ensemble of the State of Tuva, where she toured various European countries, as well as the USA, Canada, Australia and New Zealand. In 1989, she began collaborating with Russian representatives of new jazz and experimental music. Her first concert tour in this new framework took place in 1990. Since then Namtchylak has performed several times as a member of Tri O (together with S. Letov, A. Kiritschenko, A. Alexandrov), as well as with representatives of European music – Peter Kowald, Butch Morris, W. Luedi, S. Murray, Ned Rottenberg, Evan Parker and others. She has produced many musical releases, both solo and group, at various recording studios, including such as: FMP (Germany), Leo Records (Great Britain), FIN Records (Japan) and others. Namtchylak participated in numerous festivals of experimental music in Germany, Switzerland, Denmark, Holland, France, Italy, USA, Japan and many others, and also in Russia, performing jointly with such musicians as M. Zhukov, V. Rezitsky, the groups Tri O, Arkhangelsk and Moscow Composers Orchestra.