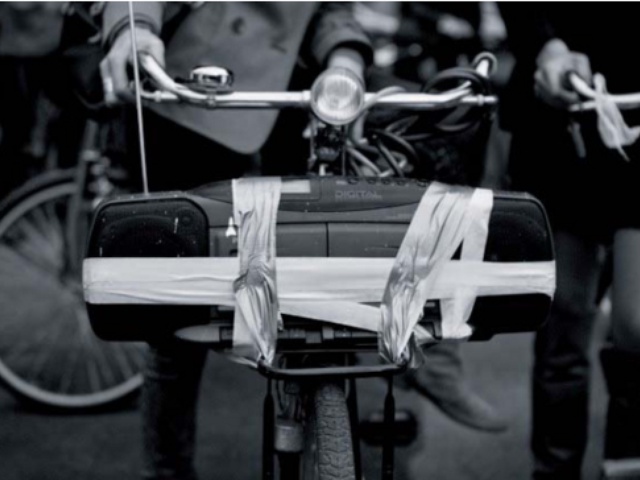 Jeudi 21/07 à 12h00 : ‘La radio a pedali / Radio on wheels’ is a project produced by Radio Papesse in collaboration with the Maggio Musicale Fiorentino Theatre and Radio 3 Rai. ‘Radio on wheels’ is a participatory project with which Radio Papesse tried to trigger a reflection around the ideas of energy – released by art and culture – and sustainability of both cultural consumption and environmental habits.

On the occasion of the last Nuit Blanche of Florence, on april 30th, 2011 we invited cyclists to join a parade, to bring their own radios and to tune in to Radio 3 Rai, that would have aired the live concert at the Maggio Fiorentino Theatre that very night: Beethoven and Liszt interpreted by Daniel Barenboim and the Maggio Fiorentino Orchestra, under the direction of Zubin Mehta. We invited the sound artist and musician Alessio Ballerini to record the sounds of the parade and the show he has produced for Radia – along with the sound postcard of the ride – is just a bit of the entire and multilayered audio project he is still developing:

“Along the run with many other bikers I held a 4 channel portable audio recorder in one hand, forward facing the two onboard mics and fastening the two other external mics on my backpack. That allowed me to record sounds both in front of me and in the rear. This was meant to allow me to postproduce the field recordings in two different forms. On one hand I decided to use and mix the frontal stereophonic recordings with other field recordings, original scores and extracts from Beethoven and Liszt; the output are both a 25 minutes long radio piece and a 6 tracks release. On the other hand, thanks to the 4 channel recordings I recreated the acoustic environment of the bike parade just adding more sounds to enhance the imaginary/imaginative experience of those visitors who will listen to it in a dark room absorbed by a quadraphonic reproduction. I decided to start with the recording of an interview* with Zubin Mehta released by Radio 3 Rai just before the beginning of the concert. I think Mehta’s words are good food for thoughts about technology – at large – and the role of music in the evolution of our society since the beginning of the XX century. I find those words even more meaningful since I recorded them in Piazza dell’Indipendenza where more than 200 bikers came together tuning in their portable radios to Radio Rai, waiting the parade to begin. I recorded chit-chats, background noises, Mehta’s voice coming out the radio speakers and the resulting field recording was appealing to me also in terms of poetics; everything was connected, Beethoven, Zubin Mehta, people ‘playing’ their radios and myself recording them. I did use Beethoven and Liszt, along with original scores and field recordings, according all of them the same standing. This experience has been both a generational comparison and a way to find a common ground between two opposite poles: internet and vinyls, cars and bicycles, till my compositional approach that combines rough recordings and post-production mix. The discourse around technology though is hopeful- be my creative approach to it, be Mehta’s call for a more conscientious use of it or the dreamy memories of a group of old men who remember the time when cars and the Mille Miglia Race were synonyms for technology; all these facets positively decline the technological issue.” [A.B]

* Synopsis of Zubin Mehta’s interview translated from Italian: The interview concentrates upon the diverse media through which people have been listening to music since the age Zubin Metha started playing and directing: the long play was yet to come and people did think that a record was definitive. Mehta has always felt unconfortable with this idea and on the contrary he still thinks that changing interpretations in music are the real miracle. He also reflects on the return of people to live performances and – once having got the highest quality of the cd – to the first person experience of the concerts. Mehta also remembers a conversation he had around the beginning of the 70s with Arthur Rubinstein who already reported the issue of the ‘new audience’. Comparing with the 20s – when more than 25% of his audience was educated to the music he used to play – he had witnessed a shift in the music education and knowledge of people. Internet flourished on that already changing ground; Mehta credits internet the much broader flux of informations but invites the youngest generation to interpret and try to disentangle the flow of available informations in order to turn them into education. For his part he appreciates Youtube but he hardly manages to have free time; he also admits to behave childishly: once started he would never quit the ‘game’.