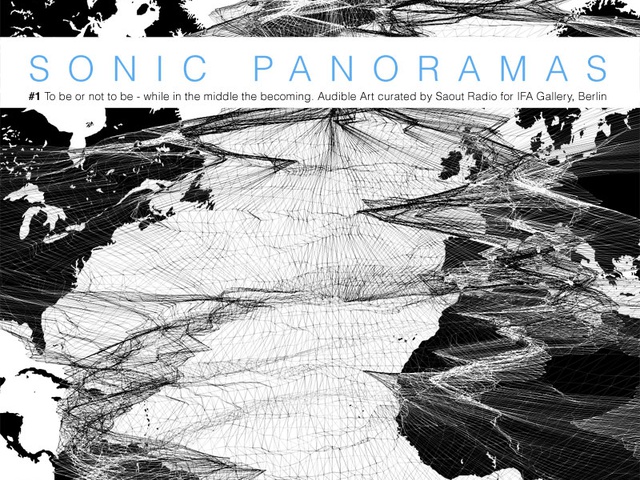 SONIC PANORAMAS
Saout Radio for Ifa Galery, Berlin
For the 2017 program at Ifa Gallery Berlin, Saout Radio proposes a sonic travel into the universe of sound art exploring its different possibilities, the richness of its languages and the multitude of its sensuous experience. Traveling from radio and sound art to video and interventions in the public space, the program proposes an understanding of sound as a political and aesthetic contamination, as a delocalised and delocalising practice that, by moving across different geographies is capable of translating there other cultural and mental places. A space that through listening, seeing and sensing calls us to think critically, while creating enriching interactions and exchanges. Starting from the double sense of the word panorama, as a wide view on a specific subject or scene, but also as on overview on a specific landscape, “Sonic panoramas” proposes multiple approaches to sonic arts from different generations of artists, for creating multiple aesthetic experiences for visitors and for opening a space of reflection about how sound can translate geographies over and beyond boundaries. In these propositions, becoming sonic, the panoramas will no longer need observers, but participants : subjects, who share and contaminate mental and physical geographies, are thus invited to engage and deconstruct stereotypes for
generating expanded forms of geographies and views.
www.saoutradio.com

Sonic panorama #1
To be or not to be - While in the middle the becoming
To be or not to be. Being, becoming. Identity has turned into one
of the most politicized and slippery spaces.
Philosopher and poet Eduard Glissant recognizes Identity is not a
monolith idea. We are, because we are in relation with the other. Our roots are like the ones of a plant or a tree, they make us grow by the meeting of other roots and they meet like crossing hands. Guided by these ideas Saout Radio propose one hour immersion in a sonic panorama, exploring the notion of identity through different languages and formats, through different sensibilities and voices and also one video screening with the video “Complementare” by Italian artists Bianco Valente.
Radio show on audio art
curated by Younes Baba Ali and Anna Raimondo for Saout Radio
commissioned by Alya Sebti for Ifa Galery, Berlin
To listen at Ifa Galery from the 30th March to 11th June 2017

PLAY LIST
Tout le monde s’appelle Mohamed
Younes Baba-Ali (Ma), 1’29’’, 2013
Imagine a sound that could not only be produced but also heard by the listener, a sound he could physically and instinctively react to. Imagine a direct form of interaction based on sound. This is the beginning of this piece, where, in the street, a voice calls “Mohamed”, an exclamation addressed to any unknown male. A frank and brutal call which fills the gap left by the radio medium, where you can only imagine the listener’s feedback.

In the gap
Hannibal Andersen (Dk), 7’21’’, 2014
In my little seat, in this machine made of metal, I am destined to wait while I am being transported towards my destination. I am forwarded, swiftly, yet my body remains still. My senses unfold and sharpen as time and distance collapse in the gap between A and
B. There is no letter between A and B, only a gap. And In this gap, I discover the subtle harmonics in the humming of the engine.
There is nothing between these harmonics either, except the everpresent background noise, demanding my attention.

Untitled (the stranger, the water and what I am)
Anna Raimondo (It), 1’31’’, 2012
“(...) Anna Raimondo is aware that every definition is a limitation, a frontier in itself, something that unites but also separates, that can be impermeable. A stranger splashes her at each definition she declares about herself as a woman, as a feminist, as an italian, as an artist in a metropolis such as london... each water bucket thrown against the performer carries the innocence and violence of games. By the way, being soaking wet, being baptized, are themselves rites of passage, alluding to fluidity, instability, permanent changeability. The action here aims at approaching one of the thorniest issues of the time: if identity has effectively become the battleground of political confrontation, what should we expect when finding that no space for self-definition is any longer available?” by Maria Iñigo Clavo

Monologue
Sama Waly (Eg), 4’16’’, 2014
A bodiless voice speaks in first person, in attempt to define ‘I’ ... When a voice becomes ‘nothing’, in this nothingness is reborn as
language, it transforms into a breath, and eventually reaches silence; you have witnessed the existentialist crisis of language.

Limitele Limbii Mele
Maria Balabas (Ro), 28’41’’, 2015
Ludwig Wittgenstein’s text is the starting point for this artistic approach. I wished to research empirical the semantics which this phrase can receive through the simple translation from one language to another. For this, I used the social media and the foreign languages departments of the Romanian Broadcasting Corporation. O used every recording people sent me and the result is this collage in which Wittgenstein means not only translation, but different intonations, multiple recording mediums, an invisible international community connected through the very simple response to the question “How would you translate in your language the limits of my language mean etc etc...”

Fried rice, curried chips and a diet coke
Karen Power (Irl), RTÉ , 10’32’’, 2008
In recent times, I have become very interested in using the sound of words and syllables as musical material. I wish to draw on Trevor
Wishart’s view in support of my approach to words and language in the context of this piece. ‘I am going to propose that words never ‘mean’ anything at all. Only the people ‘mean’ and words merely contribute toward signifying peoples’ meanings.