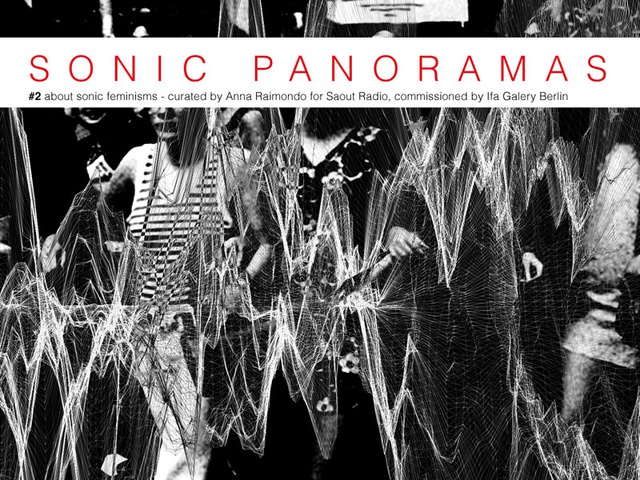 There are as many sounds as possible ways to be woman.
As many women as possible feminisms.
As many feminisms as possible sounds.
S O N I C P A N O R A M A S
Saout Radio for Ifa Galery, Berlin
For the 2017 program at Ifa Gallery Berlin, Saout Radio proposes a sonic travel into the universe of sound art
exploring its different possibilities, the richness of its languages and the multitude of its sensuous experience.
Traveling from radio and sound art to video and interventions in the public space, the program proposes an
understanding of sound as a political and aesthetic contamination, as a delocalised and delocalising practice
that, by moving across different geographies is capable of translating there other cultural and mental places. A
space that through listening, seeing and sensing calls us to think critically, while creating enriching interactions
and exchanges. Starting from the double sense of the word panorama, as a wide view on a specific subject or
scene, but also as on overview on a specific landscape, “Sonic panoramas” proposes multiple approaches to
sonic arts from different generations of artists, for creating multiple aesthetic experiences for visitors and for
opening a space of reflection about how sound can translate geographies over and beyond boundaries. In these
propositions, becoming sonic, the panoramas will no longer need observers, but participants : subjects, who
share and contaminate mental and physical geographies, are thus invited to engage and deconstruct stereotypes
for generating expanded forms of geographies and views.
www.saoutradio.comSonic panorama #2
about sonic feminisms
PLAY LIST
Randa Maroufi (born 1987, Casablanca, MA) works and lives in
Paris, FR).
Visual artist and film maker graduate from the University in Tetou-
an, Angers and Le Fresnoy.
Close-Up, 2016
How a famous painting of western art history from the 19th century
is interpreted by Moroccan people of my surrounding today?
“Close-up” is a participative work which invites various people of
my network (friends, family, artists,...) to describe or to comment
via whatsapp Gustave Courbet’s painting “The origin of the world”.
“Close-up” is especially a way to speak about the « intimate thing
» and about its representation.

Cathy Lane is an English composer, sound artist and academic
based in London (UK).
Her work uses spoken word, field recordings and archive material
to explore aspects of our listening relationship with each other and
the multiverse. She is currently focused on how sound relates to
the past, our histories, environment and our collective and indivi-
dual memories from a feminist perspective.
Cathy is a Professor of Sound Arts and Director of CRiSAP (Creati-
ve Research in Sound Arts Practice), University of the Arts London.
Hidden Lives, 1999
Hidden Lives explores ideas of the house as a repository of memo-
ries, and of women as the curators of hidden histories. The themes
of the domestic, family and the lives and histories of women which
I first investigated in Hidden Lives have surfaced repeatedly in my
work as have some of the compositional strategies used in the
piece, such as composing with the voices of friends and family;
the sounding of written text and the use of recorded spoken word
as primary material.
Hidden Lives was commissioned by the Institut International de
Musique Electroacoustique and realised in their studio in Bourges,
France.
Habiba Effat (born in 1991 in Cairo, Egypt. Lives and works in
Cairo, EG)
She is a Cairo-based sound artist and writer. With a BA from the
American University in Cairo, she currently works with indepen-
dent online news outlet Mada Masr.
Q //\\
, 2017
Q //\\
is a sound piece created using manipulated field
recordings of daily, personal interactions that attempts to explore
the intersectionality of gender performance, spatial negotiations
and class dynamics within public encounters in Cairo.

Myriam Pruvot is a French vocalist, a sound artist and a performer
based in Brussels (BE).
She’s graduated in a master degree in fine arts in France, and then
she has been teaching print during severals years. She is also
trained in improvisation, vocal techniques and radio creation. She
has collaborated as an author and a performer on various projects
for radio (for Alessandro Bosetti, laviemanifeste, Anne-Laure Pi-
gache), music (Sylvain Chauveau, label Wild Silence) and choreo-
graphy (with playwright Céline Cartillier, Groupenfonction, national
Chilean ballet El Banch, Matthias Varenne in Festival Actoral) in
Europe, South America and Canada. Following a journey in Chile,
she has released in 2013 an album wich combines field recording
and improvised music entitled Niebla. She will continue the exi-
stence of this album in concert under the name of Monte Isola in
Belgium, France and Portugal. In 2015 she joined Prototype II, a
research program in choreographic composition at the Abbaye de
Royaumont, as a composer. In 2017 she is awarded a fellowship
in ACSR and will be in residence on the island of Comacina (Italy)
as part of the Wallonie Brussels International Federation. Singing,
orality and soundscapes are her main subjects of exploration.

Foudre Chant, 2014
Sound sequence map which intersects recording and vocal impro-
visation. It is a single take, the singing is given raw, in a different
place each time. Broadcast on laviemanifeste live peformance at
Festival Monophonic à Bruxelles