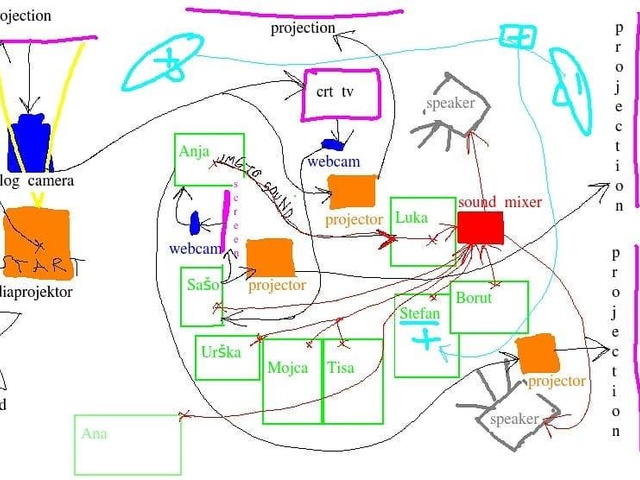 RADADAR: a multimedia digestive circuit (Radio Student) : There were many Dada’s. They have inhabited different cities, were named with many names, some were left unknown, others nameless. Borderlessness is written all over Dada’s body. She is not offended and she makes offenses. Directing infinity back to its own beginnings makes Dada capable of recurrently establishing clarity. Crossing and dismantling sense out of borders and limits – we know them as obstacles, as constraints, as objects to walk over, dodge and evade. For its destruction and digestion we need Dada that takes the principle of “kakortedragost” (“asyouplease” – the concept of Dragan Aleksić) to break through the ingrained structures of power.

RADADAR: a multimedia digestive circuit performative installation took place on 17th December 2020 in Ljubljana, Slovenia as an annual event of Radio Student’s open radio (art-theory) investigative platform RADAR (www.radiostudent.si/radar), hosted by Cirkulacija2, a basement echo chamber residing below the city’s main street. Trespassing the hours of the official curfew that the residents of the city must obey, the circuit comes to life. It is being fed by a messy archive of photo slides. Memories from another time are being chewed, consumed, processed, transformed and mutated. Humans along with analog and digital machines intervene into the past. Artefacts are being dragged out of the abyss of oblivion. Their materiality serves as a point of departure, the exit strategy is a creation of an experience for everyone and everything involved. The comment section of the website was being read by a synthetic voice, directly feeding comments into the circuit. The audience intervened and dadaised. The memories were calling for a situated reconfiguration.

In the RADIA show #821 you can hear only a snippet of the whole circuitry. At the time of the event was streamed live on air (FM 89,3MHz) and online (see archive here: https://www.youtube.com/watch?v=eMr0MyFzND4).